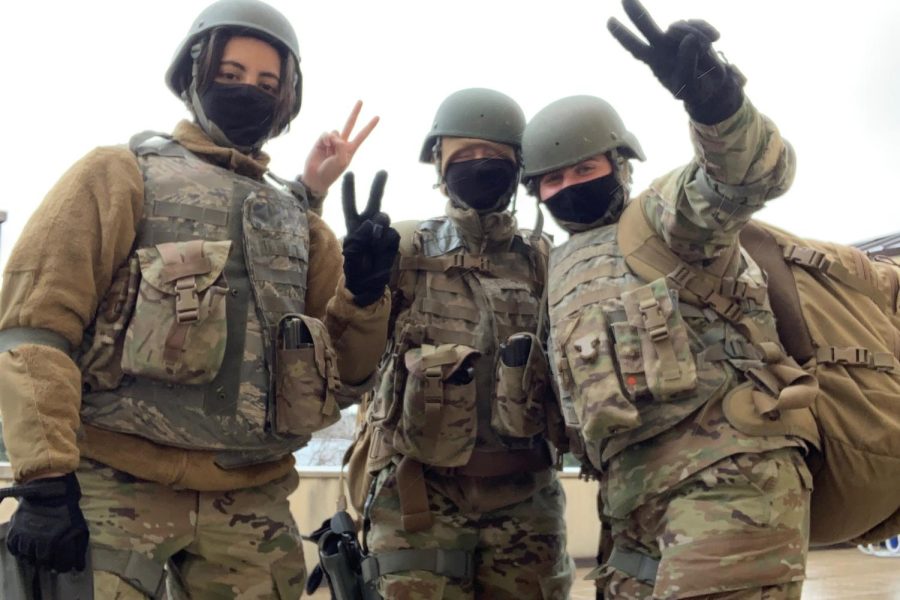 Alex Younger and recruits have fun during training at Joint Base Camp Bullis.

Younger shares her story of training on base during COVID-19

Alex Younger, a junior in mass media at Washburn University, has enjoyed her transition to being a full-time college student all while fulfilling her commitments in the Kansas Air National Guard.

Returning to school has been a refreshing change for Younger, as it has given her opportunities to focus on her education and decide what she would like to do in the future. Like many students, she wanted to ensure that her concerns regarding student debt would be taken care of, which is why her mother, Stacy Younger, presented her with the idea of joining the Kansas Air National Guard.

“Many people need to learn that this option exists,” Younger said. “Some people seem to feel stuck because they were not offered the freedom of choosing where they wanted to go to school or not. I feel that being in the National Guard is a special opportunity for those who want to be part of the military but don’t necessarily want to be sent all over the world.”

After enlisting in the fall of 2020, Younger headed to Lackland Air Force Base in San Antonio, Texas, for six months to complete basic training and tech school. Basic training was very challenging and far different from the norms that Younger was used to back home. The process took eight long weeks and was full of mental, physical and emotional tests.

“The big thing about going through basic training is adapting to discipline because they want you to follow the rules exactly as they say, ” Younger said. “It’s not hard, just a mind game, and you have to play it the right way.”

The threat of COVID-19 made this time even more difficult, as it took work to deal with the restrictions implemented on the base. The recruits spent most of their free time in the dorms, as the only time masks were allowed to be off was when eating, showering, and sleeping.

“Unfortunately, COVID made the base feel more like a prison during that time, ” Younger said.

The holidays were something to look forward to for the recruits, as they gave them a break from the base and let them return home, but there was concern about traveling because of a COVID outbreak in the dormitories.

“We were all super worried because the night before we left to go home, we were given a COVID test on very short notice,” Younger said.

Graduation after basic training allowed families to visit them during training, but they were also not allowed away time because of the pandemic.

“The unknown was difficult,” Stacey Younger said. “It was hard not knowing how she was doing. I started writing letters ASAP and didn’t receive Alex’s first letter for two weeks. Once she had to quarantine, she could have full access to her phone, so I had the opportunity to talk to her daily.”

The Texas warmth made the physical tasks a struggle for some, as the temperatures made it even more challenging to breathe at times.

“It was very scary sometimes because kids were passing out from the heat,” Younger said. “Since it was so hot, it felt suffocating in the masks.”

The next thing Younger had to decide was what job to apply for. After taking the ASVAB test, she ultimately picked the Security Forces. Their main job is to secure all personnel and ensure everyone on the base is safe. Those in security forces are to remain in uniform and professional since they are often seen the most by civilians.

“We are ‘the face’ of the military since we are the first people they see when visiting the base,” Younger said.

Joint Base Camp Bullis was where Younger was sent with the other new recruits to begin training for Security Force duties, which included training various types of physical conditioning and exercising using heavy equipment to simulate real-life situations. They also practiced their skills at shooting ranges where they learned how to use guns: brand-new territory for Younger.

“For the guys, it was fun. They all loved it; it was just like Call of Duty,” Younger said. “Most of us girls were out of our comfort zones compared to the guys, especially because most of us have never shot guns or played those games growing up.”

These experiences were overwhelming for Younger, but her friendships with peers and fellow recruit Emma Vincent helped her overcome the hardships and keep a strong mentality.

“Alex and I went through basic training together, which was a new and scary time in our lives,” Vincent said. “Going through these unexpected things made us bond and have a mutual understanding.”

After six months, Younger returned to Topeka to study at Washburn University while reporting to the local base once a month.

“Alex learned a lot of things ‘outside of her box’ and she has become more confident and knows she can do hard things now,” Stacey Younger said.

Younger is currently deciding whether her future lies with the Kansas Air National Guard or in the civilian world. The freedom of civilian life on campus has been a relaxing change for Younger, but she is still very grateful for all the opportunities the military provided her with.

“A big thing about joining the military is not letting yourself get too overwhelmed,” Younger said. “Try not to stress the small things, as their goal is to push you to your potential. I am glad I continued to pursue and had the mentality to get through everything, especially dealing with COVID and being away from home for six months.”