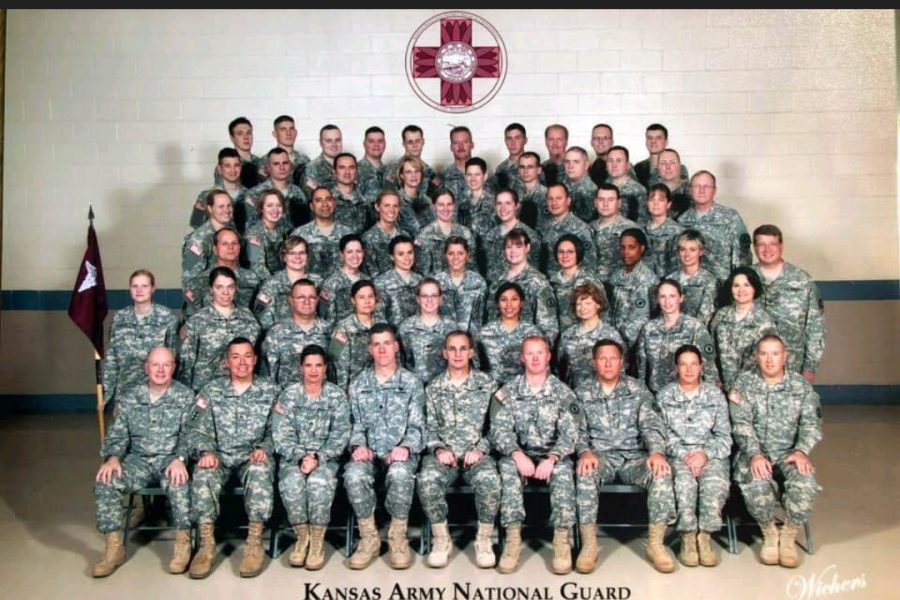 Toeber-Clark is on the second row from the bottom, first on the right side in this photo.

Toeber-Clark balanced motherhood with service and education; succeeded at all

Jody Toeber-Clark, a 50-year-old veteran of the United States National Guard, family nurse practitioner, assistant professor at Washburn University with a doctorate and mother, was happy to enlist and support her country. She spent a total of eight years in the military and only left to take care of her children.

Toeber-Clark’s mannerism is professional but caring at the same time. On the day of my interview with her, she wore an unbuttoned blue blazer and a white-flowered blouse. She has many pieces of Mother Teresa paraphernalia around her office: quotes, pictures and little statues of angels strewn about. She’s not only serious though. A little jar that reads “ashes of problem patients” resides on her desk.

In 2000, Toeber-Clark joined the military after she graduated with a master’s degree from the Medical College of Ohio. After finishing her schooling, one of her professors recommended she join the military to help pay back her student debt and help the United States of America with her degree. Since she felt the career of a family nurse practitioner was not taken very seriously in Ohio, Toeber-Clark joined the National Guard to gather some experience and start the career that she worked hard to get.

After enlistment, Toeber-Clark was surprised to find out that she would never get deployed even though it was extremely common during the 2000s.

“You’re more valuable stateside; you have to get our soldiers ready,” Toeber-Clark said, recalling what an officer had told her.

A family nurse practitioner in the National Guard makes sure the soldiers get all their medical and mental health care needs met, and these were the main things Toeber-Clark dealt with.

“The weekends were long, 12-hour days, ’cause you would sometimes see 1,000 soldiers in a weekend,” Toeber-Clark said. “You have to make sure they are ready to go and if they take medications, you have to make the prescription for an entire year.”

During enlistment, Toeber-Clark decided to take a significant step forward in her personal life with her husband and expand her family, and this came with its own challenges.

“At that time the reserve units weren’t well equipped for new moms,” Toeber-Clark said. “In other words, there weren’t breastfeeding rooms; there weren’t places for privacy. So, you had to be an advocate for yourself.”

During the time that Toeber-Clark was enlisted (2000-2008), there had been little-to-no mothers that had gone through childbirth in the Guard. Today, maternity leave for the Guard lasts for about a year after the mother gives birth. When Toeber-Clark gave birth, however, women were not paid for taking the necessary amount of time off.

“I had to nurse my newborns in a public bathroom in a stall sitting on the toilet,” Toeber-Clark said. “This unit required me to attend drill, even though my infant was not even a month old. Needless to say, when I moved back to Kansas I changed units and transferred to the Kansas National Guard.”

While Toeber-Clark recalls her experiences, she wears a smile because she clearly enjoyed her time in the Guard, even though it had long hours and barely any downtime. She believes her coworkers were the best part of the job because she met lots of people that continue to be in her life even now.

“It was not difficult at first,” Toeber-Clark said. “I had great friends in my civilian role and in my Kansas National Guard role. It was great as a nurse practitioner for the Kansas National Guard. The challenges only started when my children became busy on the weekends with traveling club soccer. My grandfather became ill as well. I needed to transition out of my Guard role and that was difficult. They were a great group of supportive people.”

“I knew her in high school,” said Jayson Headrick, a former classmate of Toeber-Clark. “We didn’t know each other very well, but she seemed very nice and she was really well-liked. From what I remember, she was pretty smart and studious.”

Today, Toeber-Clark works as a doctor of nursing practice and an assistant professor at Washburn University. She believes if it weren’t for her age being past the armed forces’ maximum, she would rejoin the military and continue where she had left off as captain.