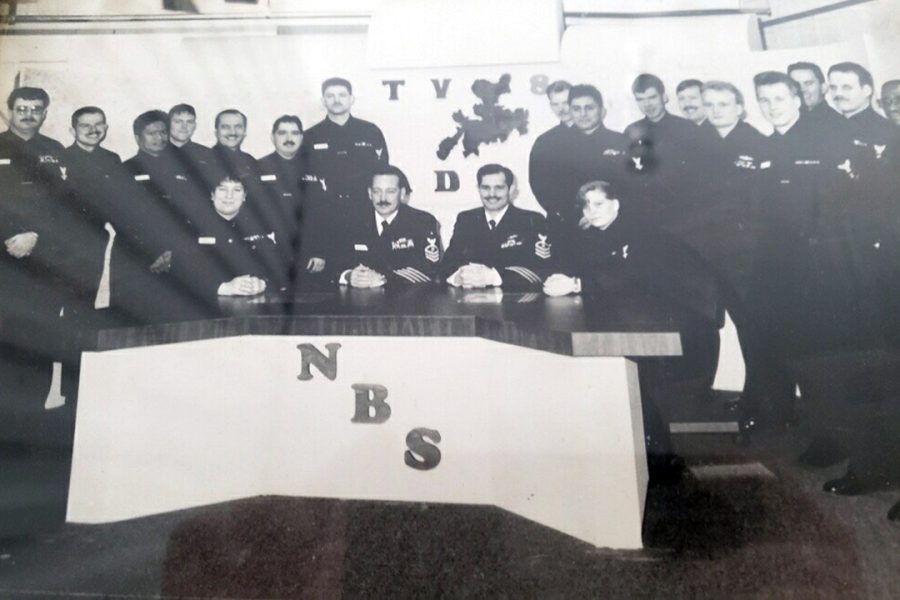 Guerrero and others gather for the remodel of the Navy Broadcasting Station, which was also part of the bigger worldwide Armed Forces Radio and Television Services.

Guerrero’s journey takes him from Navy to Washburn

For 14 years, Raymond Mathias Guerrero served in the United States Navy until he retired in 1997. During his time, he specialized in broadcast engineering and oversaw interior communications as a first-class petty officer. Now, Guerrero is on his way to getting his degree in alcohol and drug counseling.

Guerrero wasn’t sure what he was going to do right after high school, but being born and raised in east Los Angeles, he knew one thing he wanted to do, and that was to leave Los Angeles behind. The military was the perfect opportunity for a better future.

One of the challenges Guerrero faced when transiting to military life was culture shock. Born and bred with nothing but Hispanics and Mexican food, it was all he knew so when he joined the U.S. Navy, he worked with people from all types of races and cultures and that was new to him.

Guerrero said the food was also a culture shock. When he was stationed in Florida, the food served was a lot different than what he was used to, but he said it was a great experience to try new things. From that, he learned how beneficial it could be to expand his knowledge.

Looking back at his time in the military, Guerrero enjoyed the camaraderie; being surrounded by the other sailors and being around the sea for seven months were experiences he enjoyed because of the people he was with.

Guerrero said there were many long working hours, but everyone got along and worked hard together as a team.

Guerrero received lots of awards and accolades during his time in the military but to him, his most accomplished award was learning his field as a broadcast engineer.

“There weren’t many Hispanics in that field and not someone from east Los Angeles that could say they were a broadcast engineer,” Guerrero said.

Once Guerrero had gotten his FCC license and became a broadcast engineer in the U.S. Navy, it was easy to get a job after stepping away from the military life.

Before he found his calling in broadcast engineering, Guerrero’s career field at the time was completely different. He would see a specific department in the media field that he would walk by every day and that’s when his curiosity on how one could become a media professional began. Eventually, he did the right paperwork that was necessary for him to crossover.

“I liked it so much that every day I was reading something new on how to become an engineer broadcaster,” Guerrero said.

Guerrero suffers from PTSD, which comes in many forms, and maintaining his relationships with friends and family wasn’t the easiest.

“I’ve been married twice, divorced twice,” Guerrero said, but he enjoyed being out on the sea away from the world and feels like his time in the military was not wasted by any means.

“I love him,” Debra Pacheco said, Guerrero’s stepmother. “Still to this day, all those years in the military molded him and shaped him into who he is now.”

Guerrero empathized the importance of networking and getting those opportunities that come from networking. During his time serving, he only served 14 of the 20 years from his enlistment. After leaving the military, Sony offered Guerrero a position and he took it, as he wanted to work for the company; plus, there was a sign-on bonus. It was the perfect job for him as he still got to enjoy something he already loved doing.

Guerrero now works for the U.S. Veterans Affairs department in a program known as Compensated Work Therapy and will be starting his classes full-time at Washburn University in spring 2023. He plans on getting his degree in alcohol and drug counseling.

Now 59 years old, Guerrero recognizes how long it has taken him to be in a good standing and hopes his journey shows others who still need guidance that there is a way out and there is no shame in asking for help.