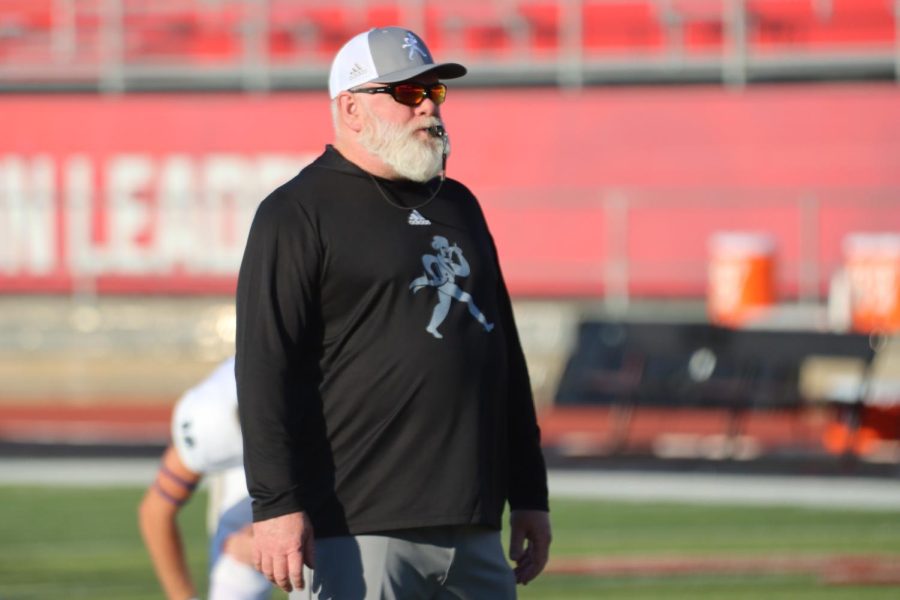 Trupp is a strength and conditioning director for Washburn football.

Trupp says service set him up to succeed in current occupations

David Trupp, currently a strength/conditioning director and football/baseball coordinator at Washburn University, is also a longtime veteran of the United States Army, where he served from 1983-1985 and retired as an E-1 private.

At 56 years old, Trupp has two children, Connor and Kiera, and has built a career in athletics – something he feels his military service set him up for.

“I never really had the idea of joining the military,” Trupp said. “But as my senior year ended, I enjoyed the grit of soldiers and the will they had to complete their mission. That’s one of the biggest things I’ve tried to instill in the student-athletes here. I want them to have a different will and drive to conquer the obstacle at hand, whether it’s in life or on the field, court, etc.”

Trupp said he had multiple problems adapting to military life in the beginning.

“The first thing was the time change,” Trupp said. “It’s not just numbers; it changes your sleep pattern completely, and causes you to adapt fast. You have no excuses in the military. No ‘my car broke down,’ or ‘I overslept.’ You don’t have that luxury. You are expected to be at everything and to bring all your attention and discipline. Smart mouths don’t last, and I learned that the hard way. I lost 20 pounds in the first two months of being in the military. Everything we did was rigorous, and it took everything out of you.”

But not everything was tough for Trupp. He credits the military with some of the most valuable lessons he learned.

“I enjoyed the military cause it gave me discipline that I know football could never give you,” Trupp said. “It taught me to value my freedom, not from jail but for being able to breathe without a foreign nation threating my life. I learned to value the people who go to fight for our country and truly keep us safe.”

Trupp started his college education in the military and pursued a degree in physical science.

“Physical science interested me in the military because I wanted to be more muscular, leaner and I wanted people to see me and say, ‘that’s a military man,’” Trupp said.

After his two-year commitment was up, Trupp decided not to reenlist because of his family and to finish up his degree.

“There weren’t many changes I had to make; I already knew and remembered what the civilian life was like,” Trupp said. “I kept the military time and discipline as a part of my life because it made the changes easier than just being another soldier coming home and losing themselves in the rough world we live in.”

A year after Trupp came back home to Topeka, he left to play football at the University of Nebraska in 1985. After a year there, he transferred to Baker University to fully apply himself to his degree. This was when Trupp started a family and had his first child, Keira Trupp.

“My dad’s always been a caring a devoted father and husband to my mom,” Keira Trupp said. “A lot of people grow up in a military household and must move all around the country, if not the world. I was fortunate enough to not have to do that. Also, a lot of men in the Army have trouble having a family or maintaining one, and my dad was amazing. He never let his problems or any obstacles he encountered in the Army affect the man he was when he had me or my brother.”

Trupp’s second child, Conner Trupp, is now a student and band player at Washburn University. Conner Trupp said he loves being on campus and being able to interact with his father throughout the week.

“Growing up with my father and still being able to interact with him and see him is a blessing,” Connor Trupp said. “I am truly blessed for having him not as just a father, but as a friend. He’s able to help me with any academic problems and never judged me for not being as engaged with sports as he was. He’s been very supportive all throughout my life.

Craig Schurig, head coach of Washburn football, is another person who can attest to the kind of disciplined man Trupp is. Schurig said he greatly appreciates Trupp’s dedication and everything he has given to the Washburn community.

“David has always been a great man, teacher, student and fellow coach,” Schurig said. “He has been coaching here for 21 years and has given each and every one of our players something to take with them once they leave and truly enter the real world. He is a bright-spirited man and an outstanding father. I wouldn’t trade another coach in the world for him.”