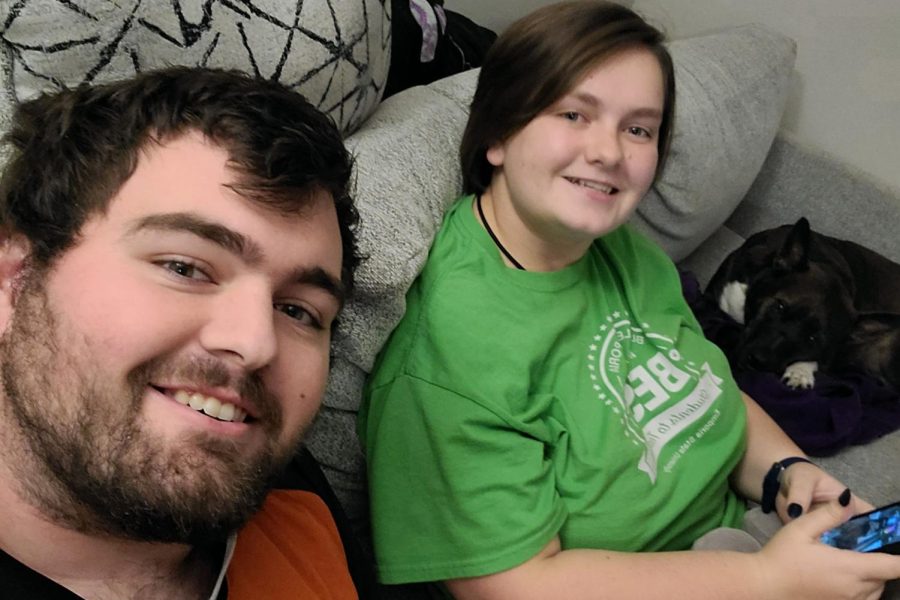 Haley and Jacob Maynard pose for a photo.

Maynard proud to have served in Army and National Guard

Jacob Maynard, a mass media major at Washburn University, is also an old hand at military life since he has served both in the United States Army and is now serving in the Kansas National Guard.

Maynard first enlisted in the U.S. Army in March 2017, and was originally stationed in Fort Riley, Kansas, where he worked as a computer/detection systems repairer.

“I was a pretty quiet kid in high school and stayed to myself,” Maynard said. “It was a big transition from civilian life. It was hard to accept the authority above me and keep up with the physical aspect.”

However, Maynard soon adapted and began earning promotions quickly during his time in the Army.

“I worked my way up to a specialist rank,” Maynard said, which is the highest pay grade one can achieve as a junior and receives the same pay as a corporal.

Maynard was stationed at Fort Riley for two months before being deployed to Germany for a training exercise. His job there was to repair night-vision goggles and chemical detection devices. This exercise was called Operation: Atlantic Resolve.

While away, Maynard made sure to communicate with his friends and family, including his wife, Haley Maynard. Maynard said Discord was the easiest way to stay in touch and is a common way many active military members speak with their families overseas.

After Operation: Atlantic Resolve was over, Maynard was sent back to Fort Riley for two years. This is when he met Private First-Class Nick Jenkins. Jenkins, originally from Bryan, Texas, never imagined himself in the military.

“I never wanted to go into the Army, but my father was in the Army and it was the only option I had,” Jenkins said.

After being stationed at Fort Riley together, Jenkins and Maynard became good friends. During downtime, they would play video games or board games together and in March 2020, Maynard and Jenkins were both sent to South Korea for an operation that ended up being completely different from anything either had ever experienced before, because March was the beginning of the COVID-19 pandemic. Instead of doing field exercises, the two dealt with pandemic protocols.

While in South Korea, communication between  Maynard and his wife was good. The only struggle was not being able to see each other physically. Haley Maynard is a third-grade teacher in Topeka, and she’s been with Jacob Maynard for three years now.

“When Jacob was deployed, I really missed laughing with him,” Haley Maynard said. “I missed watching YouTube and making stupid jokes or comments. I struggled with the joyless silence he left.”

Maynard returned to the United States in November 2020, and served on active duty with the Army until May 2021, when he transitioned into the Kansas National Guard. However, the story does not stop here. Maynard said that he had some trouble adapting from active duty in the Army to civilian life with National Guard activities only on the weekend.

“Going back to civilian life was tough,” Maynard said. “I got a cat to help me relax. I also had to get a job to become social again.”

Maynard is currently a mass media major focusing on film and video classes. Although he’s not active in the Army any longer, he still maintains good relationships that he developed while serving in the military, like his friendship with Jenkins.

Jenkins said his favorite memory is when Jacob Maynard and Haley Maynard took Jenkins down to a lake in Wichita, Kansas, where they spent the weekend camping and making memories for Jenkins’ 21st birthday celebration.

Maynard has done many great things in his life, and he credits his experiences to the military. He is proud to have served in the Army and to be now serving in the Kansas National Guard.

Haley Maynard is also proud of her husband’s experiences and his service. She feels he’s also done a wonderful job adapting to life in the National Guard versus the Army.

“Jacob is still a dork, but he has found newfound freedom,” Haley Maynard said. “He has really been able to express himself and become his own person.”