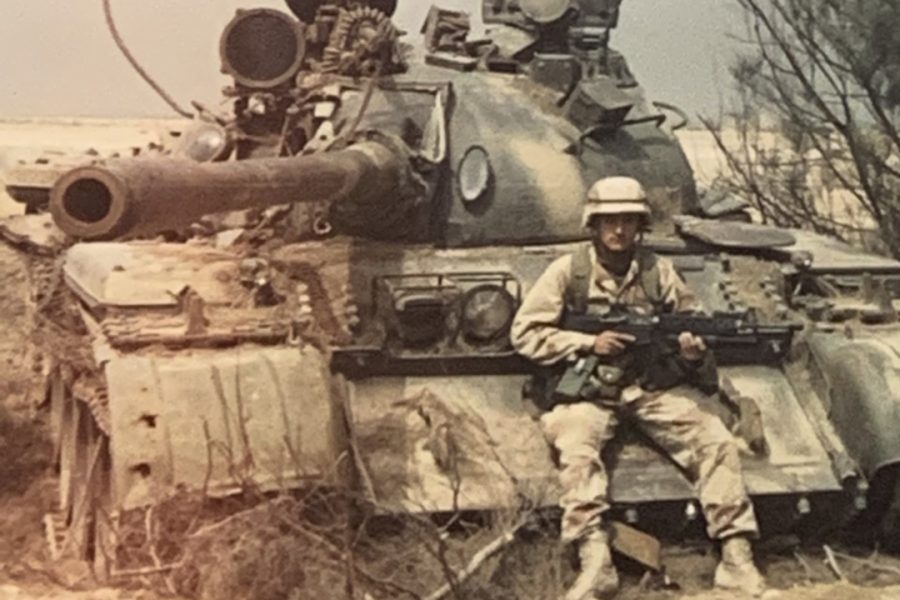 Chris Bowers while serving in the U.S. Army.

Bowers continues to find ways to serve other student vets

Chris Bowers, the Washburn University Military Transitions Coordinator and Advocate, wasn’t always focused on higher education, let alone pursuing a career within the field. However, what he was sure of as a young man was that his sights were set on joining the military.

Growing up, Bowers found himself getting tired of school and learning the same things year after year. From fifth grade on, he felt like the same math, English and history lessons were being drilled into him. This effectively turned him away from gaining a higher education degree at the time.

“I had a need for adrenaline,” Bowers said. “I wanted to see the world.”

Joining the military seemed like the obvious choice, so in 1987 Bowers enlisted in the United States Army and began the first of his 13 years of service.

The military was a melting pot of people at the time, according to Bowers. Some enlisted as it was a fast track to citizenship, while others enlisted due to the G.I. Bill, which grants those who served with funds that allow them to continue their educational pursuits.

Though many differences were present between people in the Army, holding one another in high respect was an aspect that Bowers and his fellow service members found common ground on. The unfortunate thing about this, though, was that sometimes this meant Bowers and those around him didn’t always hear what they wanted to.

“My mentors told you how it was,” Bowers said. “They didn’t make answers up just to be able to say something.”

This is a philosophy that would follow Bowers into his later life when starting his career as the Military Transitions Coordinator and Advocate at Washburn.

Bowers’ service to the U.S. Army ended when he was taken away from reconnaissance and placed in charge of people in a more office-like environment. He told his superiors at the time that he wanted to be placed back on a reconnaissance team to continue his service or he would be leaving the Army. When he was told no, Bowers knew it was time to change things up and start a new life adventure.

Bowers spent some time working in law enforcement before coming to Washburn University in 2013 as a veteran student looking to get a degree in history. The subject had always been an interest of his, especially when it came to war history.

“Washburn is small and convenient,” Bowers said. “The one-on-ones with the professors on campus help those who were in combat.”

Washburn may have been small in terms of student numbers, but it didn’t lack in personable people, which Bowers said one could find all over campus, even still to this day.

When Bowers began to take courses at Washburn, the Military-Student Success Center wasn’t anything but a mere thought in the mind of some individuals on campus. The process of creating the Success Center had been slow going, but in the fall 2015 semester, all the pieces fell into place and the room finally opened in Mabee Library, giving way to a space specifically designed for veteran students.

Bowers played a major role in the process of designing the room. At the time of creation, he was a student worker at Washburn, serving as a peer educator in the First Year Experience course for new veteran students. When it finally came time for Washburn University to find someone to oversee the Success Center, they knew exactly who to call on.

Alan Bearman, professor of history and dean of the Center for Student Success and Retention, was intimately involved in raising the funds that went towards the development of the Military-Student Success Center. The two men met when Bowers was still a student at Washburn.

“The thing I remember most is how other military affiliated people (when they needed help) went to Chris,” Bearman said. “Even though he was a student, they were already going to Chris and he was already helping them. He was pointing them in the right direction, guiding them, giving them a sounding board. He was just a natural. Every time I’d turn around, he was helping somebody.”

Bearman also said that Bowers is best described as a magnet. Student veterans were, and still are, drawn to Bowers daily. He may not always have the answers students need, but he is able to point them in the right direction, especially when those services are on campus.

Bowers has close connections with many of Washburn University’s services. He works with career services, the Diversity and Inclusion Office and Mabee Library to best help veteran students who may be struggling.

The struggles veteran students face daily aren’t limited to a certain sphere. During lunchtime, student veterans will gather in the Success Center and discuss the challenges they are facing, which range from car problems to food shortages to stress about an upcoming test. They form a tribe together, Bowers stated.

This community amongst student veterans at Washburn starts when they enter WU101, the First Year Experience course. Bowers is currently serving as the lead instructor for the WU101 course specifically meant for student veterans, many of whom are first generation students just like Bowers.

During the semester, the student veterans in Bowers’ course work at the pace of the least prepared student to ensure all of them achieve success. He doesn’t want to move the class along too quickly and risk losing students along the way.

“During class, if a student is struggling, others will help them by making analogies between their time in service and what is happening in class,” Bowers said. “It helps them understand.”

Eric Grospitch, the vice president for Student Life at Washburn, came to Washburn seven years ago when Bowers was still an undergraduate student. Over the years Grospitch has watched as Bowers has connected with veteran students and brought new services to campus, such  the Veteran Integration to Academic Leadership, which offers mental health services to student veterans.

“He’s that calm presence that’s like, ‘let’s help you de-escalate so we can get you where you need to be,’” Grospitch said. “In all of our students, anxiety is real, so when you can talk to somebody who naturally brings the temperature down, it’s one of those things you can’t overstate – particularly when it comes to people whose life experiences are not my experiences.”

Bowers’ presence on campus isn’t just notable though; it’s also consistent. Any student can count on Bowers to be in the library making a fresh pot of coffee each morning before transitioning into his role as a driving force in bringing about student veteran success. Many issues, such as budgets and policies, limit what Bowers can get done, but nonetheless he persists every day.

“You can get a whole lot further with honey than anything else,” Bowers said.

Bowers service to the United States Army may have ended, but his current position at Washburn shows that the service lifestyle never truly stops. There is much that remains to be seen from Bowers, but the one thing that he can always be counted on for is his unfailing dedication to student veteran success on Washburn’s campus.