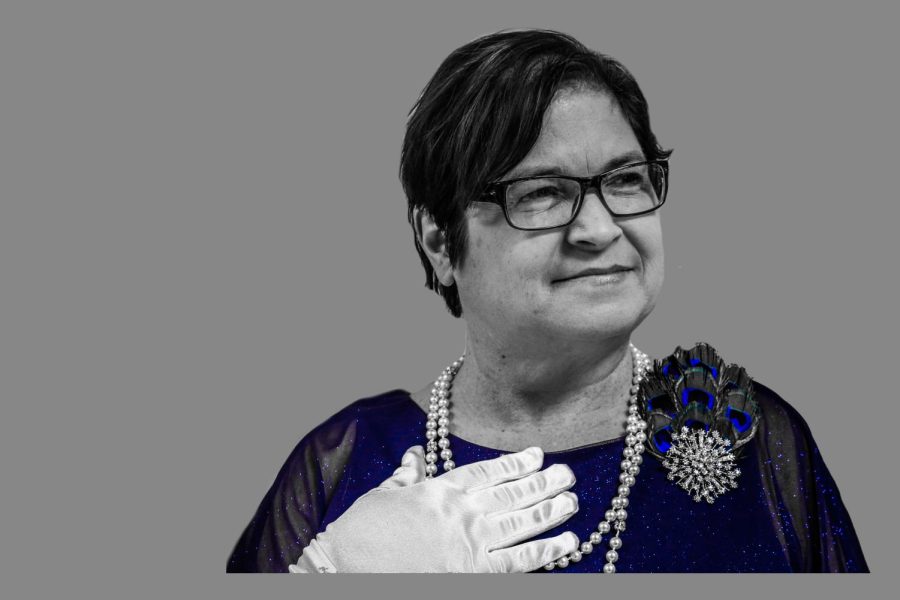 For the 2021 Mass Media Keynote Speaker Event, Tracy Horacek and members of the department’s faculty brought Clue’s characters to life.

Tracy Horacek is a U.S Army veteran who is also an office coordinator in the College of Arts and Sciences at Washburn University.

Born and raised in Florida, Horacek grew up idolizing the movie “Rambo,” and that gave her aspirations of being an Army woman. She worked toward making her dream come true in high school by being in the ROTC (which she really enjoyed), and she hoped the U.S. Army would be similar.

Horacek’s experience in the Army wasn’t all she hoped it to be. Job positioning played into that as she wanted to be a medic, but they didn’t have the position at the base she was stationed at in New Jersey. Instead, they offered her a job as morse code interceptor and she took the position. Morse code is a code in which letters are represented by combinations of long and short signals of light or sound. Learning how to communicate with dots and dashes isn’t common and is only understood by about 1 percent amongst the population.

“Although it was very challenging, I enjoyed it,” Horacek said. “One of the more difficult things about being a morse code interceptor was not falling asleep while on the job because of listening to all the dits and dots over the headphones.”

Even though this job was not what Horacek initially wanted, it did become something she found enjoyable. However, major changes in the world affected Horacek’s time in service.

This was especially true of the morning when everyone fell out in formation and Horacek and her platoon were told that Operation: Desert Shield had become Operation: Desert Storm, the two major phases of the Gulf War. Everyone in the field was told they were going to be shipped out to Iraq because of the job they all had.

“How do you prepare yourself for that kind of experience?” Horacek said. “You become a stronger person by just picking up every day and going despite the obstacles in life, and keeping your faith in God.”

As Horacek’s time in the Army was coming to an end, she believed God had a different plan for her beside the military, and Horacek knew she had to be willing to follow that path.

“That’s when I moved up to Massachusetts,” Horacek said. “I had made lots of good friendships, so I moved back, and life began a whole new way. I had friends from church and I maintained my military relationships, so I still was on base a lot.”

Horacek credits her time in the military for shaping her into the person she is today. Now, she works to support the deans from the College of Arts and Sciences and faculty from departments such as mass media and political science in their jobs.

Kristen Grimmer, an assistant professor at Washburn University, works with Horacek in the mass media department.

“Tracy is such a positive person to work with,” Grimmer said. “She’s always so helpful and she brings a smile to everyone she works with at Washburn. We are lucky to have her in our department as our office coordinator.”

Maria Stover, chair of the mass media department and one of Horacek’s supervisors, also said that Horacek is a pleasure to work with.

“Tracy always brings her best to the workplace,” Stover said. “She’s very kind and very dependable, and I couldn’t do my job nearly as well without her support.”

Horacek now works in the mass media department and still shares the same faith in the Lord as she did when she was in the military. She is proud of having served and she feels like the discipline and relationship-building skills she learned there have served her well in her civilian life.