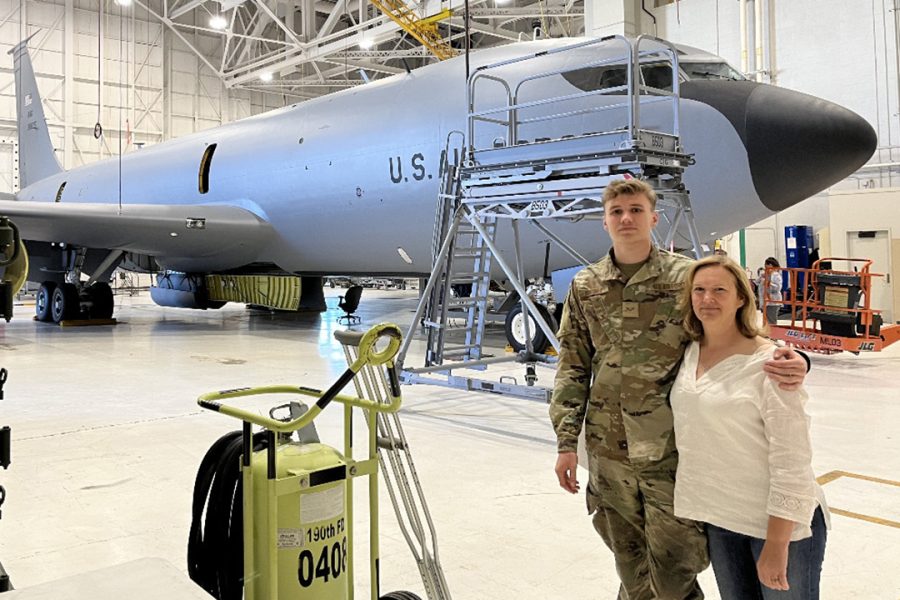 Banks Whitney stands in front of one of the planes he is certified to work on.

For Banks Whitney, joining the Kansas Air National Guard was simply joining the family business. As a 22-year-old Washburn University business major and a Restoration and Repair Crew Chief in the Kansas Air National Guard, he is following in the footsteps of both of his grandfathers, one who was a pilot for the United States Airforce and the other who worked on the same type of aircraft Banks Whitney is currently tasked with maintaining.

Though Banks Whitney will be at Washburn a little longer than it takes for the usual four-year degree, he said it’s worth it in the end because of the financial and military benefits he receives as part of his service.

Clint Whitney, Banks Whitney’s father, said he feels proud that his son is helping the nation because being a part of the National Guard often means helping with national disasters and other crises that affect Americans. Clint Whitney also said that he was happy that the Kansas Air National Guard gives Banks Whitney help with his education, “tuition and books, GI bill, bonuses and what-not.”

Though the financial benefits are definite perks for Banks Whitney, that is not the main reason he decided to serve; rather, he feels proud to protect the country that he loves.

Though Banks Whitney is proud to serve in the military, he said there were some challenges when adapting into the military life.

“The biggest shift for me in my life was the culture; everything is organized down to the smallest thing and your days are pretty much already decided before you even begin,” Banks Whitney said. “The early days and late nights along with the labor involved with my job really makes you have to work on your mental toughness”.

Banks Whitney also said that though military life is hard, having the friends and other peers to go through it with made it better.

“Some of my closet friends I made while in the military,” Banks Whitney said. “In basic, you have no one else, no phones or ways to communicate to the outside world very easily. So, all we had was pretty much each other. When you spend every minute of two months suffering together, it really unites the group. We only had each other for entertainment and support.”

Banks Whitney said he’s made a lot of friends along the way and one of those is his closest friend, Easton Weems.

“I was lucky enough to get to know Banks in tech school,” Weems said. “His friend group had been there almost a month before I arrived. They brought me in, and I became good friends with the rest of them. Banks and I later were sent to the same base and able to work in the same hanger. I’ve been able to continue our friendship and hang out often. It been nice having someone who has been with you basically your entire career and promote together as we have gone from learners to teachers on base.”

Banks Whitney is proud of his military career and of the skills he has learned since enlistment.

“What I’m most proud of is learning from scratch how to be a mechanic,” Banks Whitney said. “Many of the other airmen had previous knowledge when coming into this job and had a huge advantage on me when it came to learning about my job. I worked hard and learned as much as I could from those around me, and I would say that now I’m very knowledgeable.”

For Banks Whitney, military service is not just a tool to get his education and as of right now, he’s planning on staying in for the full 20 years.

“Once you reach that marker, you can get many benefits, such as a very nice retirement,” Banks Whitney said. “If I stay in for 20, I will most likely commission and try to become an officer, and maybe even work my way into becoming a pilot if my eyesight doesn’t give out on me first.”