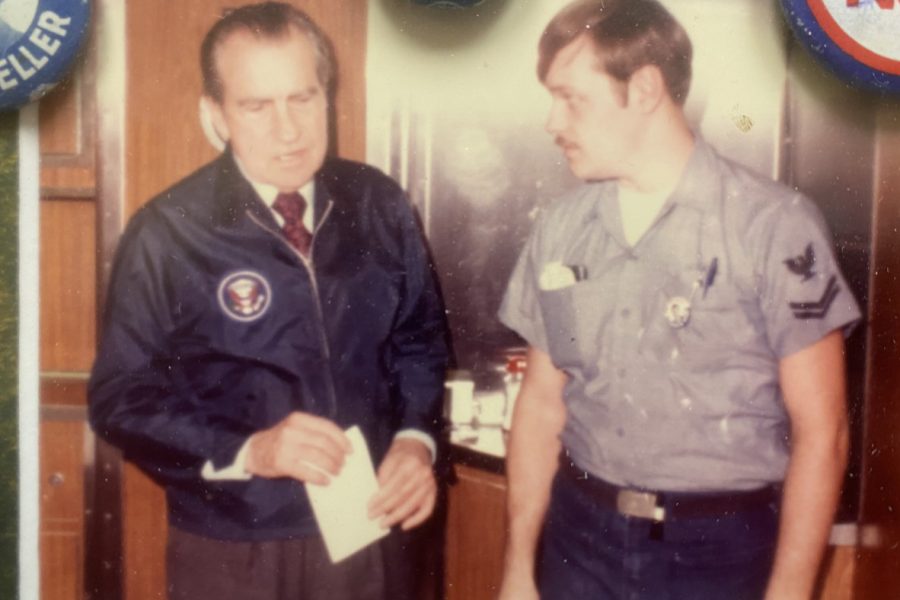 When college didn’t seem like the right path in life, soon-to-graduate Scott Nickel chose to enlist in the U.S. Navy submarine force for a few reasons: he didn’t need to be athletic, he knew submarines were air conditioned but most of all, the Navy fed well.

“I don’t lie to my students, so I wouldn’t lie to you,” Nickel said. “Those all went into my decision making.”

Nickel was one of the “rare kids” who attended kindergarten at 4 years old due to his November birthday. Shortly after graduating high school, Nickel enlisted in the Navy at 17 years old and turned 18 in boot camp. Reflecting on this time, the culture shock of boot camp was one of Nickel’s major challenges when transitioning into the force.

“Boot camp’s goal is to rip you down into nothing, and then build you back up,” Nickel said. “There’s people yelling at you, making you do pushups when you haven’t done pushups in a while.”

Regardless of the challenge, getting through all that he did is his proudest accomplishment. Nickel looks back and admires the personal growth he achieved and the life lessons he learned in a short period of time. Furthermore, Nickel believes joining the Navy was one of the best decisions he ever made.

“College would not have done that for me,” Nickel said. “I look back and wonder where I would be if I hadn’t been in the Navy.”

As an enlisted man, Nickel spent four years on the now decommissioned USS Cincinnati (SSN-693), working on the ship’s nuclear power plant. He excelled in math and science during high school, so Nickel was “grabbed” by the U.S. Naval Nuclear Program.

“Most of the time, my students look at my jacket and say, ‘oh, you were cooking,’” Nickel said. “But no, I was working on the nuclear power plant.”

Working on the plant was a good experience for Nickel, as he enjoyed learning the machinery, experiencing growth and being around his crewmates. Nickel remembers his comrades as very enjoyable, which is evident in his continued communication with some of them.

Comparing the relationships Nickel had with high school friends and Navy friends, he revealed that they had different faces and names, but it was all the same crowd. Nickel cites a specific prank he liked to play. In an area of the submarine’s engine room located on the third floor, the top, Nickel could look all the way down to the first floor of the submarine.

“I used to take gallon-sized Ziplock bags and fill them with water,” Nickel said. “Normally the person on that station stood right below, and I would drop them down. We were supposed to be quiet, but I had to have a little fun.”

Having fun in the middle of the sea is challenging, but not impossible. One thing that was “virtually impossible” for Nickel was managing and maintaining close relationships with his friends and family at home.

“The only thing you can do is have trust and make the most out of every time you see those people,” Nickel said. “I would take leave and go back home for a few weeks at a time.”

In the end, Nickel is confident and happy with the choice he made to serve in the Navy. He enjoyed his crew, the environment and everything that he had learned. However, he found himself tired of the sea.

“I estimate I spent around three and a half years of my time underwater,” Nickel said. “I was tired of going to sea. I was tired of being at sea. I didn’t enjoy that aspect anymore.”

Something that Nickel did really enjoy was being a member of the Rec Committee, the group in charge of planning ship parties, recreational gatherings and selling ship memorabilia.

“All of those things I enjoyed I should have been focusing on so when I got out, I should’ve said, ‘that’s the path I’m going to take,’” Nickel said.

Nickel received three promotions during his service, beginning as an E3 and leaving as a E6 Petty Officer First Class. Returning to civilian life for Nickel was “not too hard,” with the main challenge being finding a job.

“Once you leave, a lot of times the things you did in the Navy don’t translate into the real world,” Nickel said. “I didn’t necessarily want to go back into what I did in the Navy, so it was a little more difficult for me because I was finding my way.”