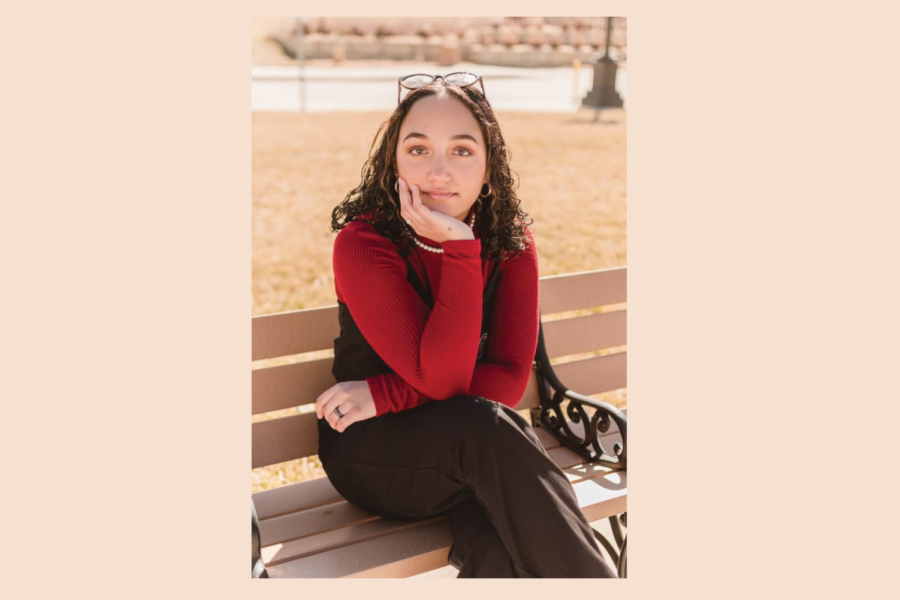 Change is possible: Sierra Jeter hopes to bring more attention to Washburn’s key issues. She and her running mate, Harrison Dollar, believe they can help the university persevere this year.

Imagine a place where your candidate is pursuing a future where there’s more safety for the students, their wellness is to be cared for and there’s inclusion for all to create a better community.

Imagine no more; Sierra Jeter is running for vice-president of WSGA alongside her running mate, Harrison Dollar for president.

Jeter is a freshman here at Washburn University majoring in political science with a double minor in History and Spanish. She joined WSGA after the bow tie event in the fall and while she was nervous from campaigning for WSGA senator, that didn’t stop her from pursuing her passion to fight for change. Jeter faced many challenges in her upbringing, but her theme throughout her campaign is to persevere, and that she did.

“In the beginning, I was a little bit discouraged because I was a first-year student, ideas, or legislation that I was putting out, seemed to keep getting pushed away or just brushed off,” said Jeter. “So, I was a little bit disheartened. But I know that you always pick yourself back up, you realize why you’re there, and you realize what you’re standing for and what you want to see change. And that’s another reason why I’m running.”

One thing that Sierra keeps close that keeps her striving, is her support from her family and friends. She knows best the importance of having connections and a support group which is why one of her and Harrison’s pillars is providing safe areas and mental health groups so that students can always have that support with one another.

“I guess the lesson that I’ve learned is to never stop trying, never stop pushing,” said Jeter. “There’s always going to be people that are in your way trying to stop you from whatever you’re achieving, whether that be like a piece of legislation or community event, there’s always somebody who’s going to disagree with you. But all you can do yourself is push through, and make sure that you’re strong enough to get to where you want to be in and do the things you want to do.”

Dollar shares his Jeter’s passion and unwillingness to give up. When speaking about the possibility of student tuition refunds, Dollar demonstrated his resolve.

“We are not gonna back down and we’re gonna fight for students. At the end of the day, just because it’s a difficult problem does not mean that we’re not going to have a solution. It may be difficult, but as student government, we’re going to make that recommendation.

In these hard times, Jeter knows how vital it is to provide students with safety so it’s one less thing they need to worry about. During the debate that was held on March 9, Sierra shared her point of view on campus safety.

“As a woman on campus, there are places around here where I don’t feel safe walking around by myself,” said Jeter. “There are not efficient lights like in parking lot 9 and no efficient lights by the sorority houses. Women are walking freely without any visibility. So, one of our other plans is to expand lights and make sure that the emergency systems on campus are working.”

To Jeter, the students are her biggest motivation in this campaign. She wants to be the voice that can speak up for students and give everyone equality and a bright experience.

“Passion is definitely something our campaign has,” said Jeter during Tuesday night’s debate. “We have a passion to help students and be there for them as much as we can and although our plans are ambitious, the difference that our opponents have, is that we are willing to go to the lengths and fight the battles that we need to get what the students want, get what the students deserve. We are ambitious for you; we are ambitious to make sure your life and quality of life on campus is worthwhile.”

One focus for Sierra is the inclusion of all different walks of life on campus. Diversity is incredibly important to Washburn and one of its strengths is its wide range of options for diversity and inclusion. Jeter and Dollar want to connect these different groups and bring diversity to a whole new level.

“As a woman of color myself, I know how important it is to have diversity, inclusion and intersectionality on campus,” said Jeter. “Our campaign is to make sure that we’re working for all students and for the diversity of students as well.”

Jeter made sure to hammer home her platform’s dedication to supporting those who need additional attention and assistance on campus.

“I said this out in debate; all students come in all shapes, sizes, colors, and we shouldn’t be focusing on just one,” said Jeter. “We should be helping the collective, I definitely think that diversity needs to be prioritized. We’re going to try our best to make sure they feel included, they feel appreciated, they feel welcome on campus. I would definitely like to sit down with a lot more of the diverse students on campus. I would love to speak with them and get their feedback and even see if they have some solutions that they would like to see on campus as well.”

Jeter has passion in her heart, and the courage to stand up for those voices that have not been heard. She stands for change, for the wellness of others, and to be there as a helping hand to guide students to be their very best.

“Remember, we’re here for you,” said Jeter. “We’re always going to represent your view. That’s the reason why we’re running.”