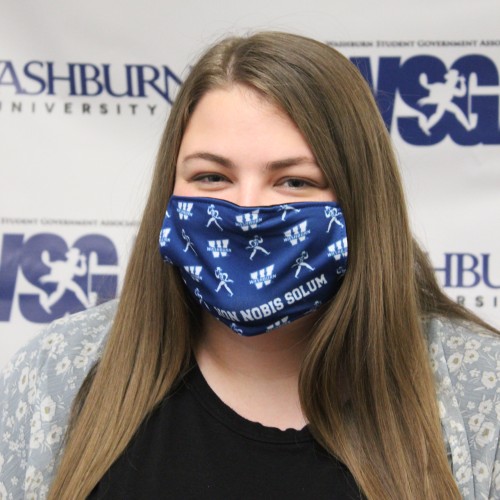 Understanding the needs of the student body and possessing the experience and leadership to address them is a difficult task for many but not for senior biology major Abby Trautman.

Running for the position of Washburn Student Government Association president, Trautman hopes to improve campus life in the wake of the pandemic.

Trautman is WSGA’s current campus and community affairs director, but also held a variety of positions such as chairperson of the Community Affairs Committee, Homecoming Director, President of the Student Ambassadors and also served as an RA for student housing on campus.

Both Trautman and her running mate, Dylan Babcock, share a vision of improving dining services, changing smoking policies, taking a look at recycling and the addition of mental wellness days into Washburn’s calendar. Both of them work on the campus and community affairs side of the student government.

“Honestly I really care about our connections with other student organizations,” said Trautman. “What I think is most important to me is [students] knowing what’s going on in WSGA. We’re supposed to be the governing body for everybody.”

Trautman and Babcock see Washburn as a complex puzzle that consists of several pieces that must be assembled properly for it to function. Trautman described these four major puzzle pieces as envision, adapt, bridge and capture.

She described each of these major pieces of her campaign in detail in the recent WSGA presidential debate last week which can be seen on Facebook Live.

Marketing to first-year students about opportunities to get involved on campus was another key component in Trautman’s goal if she were to win. Another point brought up by Trautman was that there is always work to be done in creating an environment for diversity and inclusion.

“If we were to be elected for this administration, we would want to focus on how we can bring more diversity,” said Trautman. “We have our Multicultural Intersectional learning space on campus that is downstairs in the Union Underground. We would really like to decorate it with student artwork, making it comfortable for really anyone on campus that can use that space.”

In addition to looking at diversity and inclusion on campus, Trautman and Babcock hope to bring the conversation to addressing the mental health issues of Washburn students. The past year of isolation caused by the pandemic has cut off many students from their peers, leaving them feeling more alone now than ever.

“Mental health is something I have struggled with in the past,” said Trautman. “We will work to create an environment where they [students] can be successful whether they have a mental illness or not. This is something that we want all students to be able to graduate and be proud of themselves for graduating.”

Trautman’s campaign manager, Shayden Hanes, a sophomore majoring in business grew alongside Abby in her rise to success in WSGA. Trautman served as a mentor and a leader in WSGA committees as well as how to be an RA in student housing on campus.

“I know Abby in a lot of different things,” said Hanes. “Abby was always the one that was very inclusive. Abby was always very encouraging. I have always been impressed with how she does it. She’s definitely one to ask everyone’s opinion, which I think is important. She won’t just ask, she will listen; and that’s not always common with leaders.”

Trautman and Babcock have the experience to lead Washburn and are equipped with a detailed plan to help make their vision for the university come true. To show your support for their campaign, be sure to show up on election day which starts on March 16 and runs through to March 18.