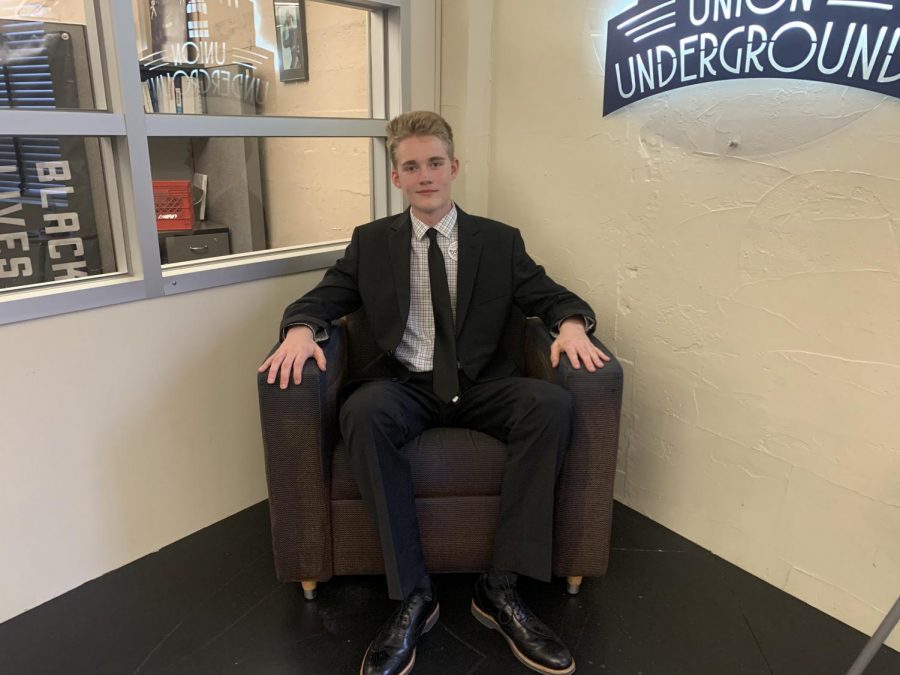 The man bringing change: Freshman Harrison Dollar has big ideas for Washburn. Along with his running mate, Sierra Jeter, he believes that Washburn is ready for a new course.

Everyone wants change, but not everyone is willing to step up to the plate and do it; Harrison Dollar is the exception.

Dollar is a freshman at Washburn University who is majoring in political science. Washburn Student Government Association (WSGA) was a great way for him to get his foot in the door and start the real-world application.

Dollar joined WSGA as a senator this past fall and said his experience wasn’t what he expected.

“For the most part it’s [WSGA] been pretty negative, I feel like WSGA doesn’t do too much for students,” said Dollar. “I believe that most of the time it is petty politics and drama, and I’m looking to change that because leadership starts at the top.”

“The current administration was sectarian and there was an obvious ingroup and outgroup, and as freshman senators we were in the out group,” said Gabe Harden, the campaign manager of the Dollar-Jeter campaign. “With that being said, I think Dylan and Abby are phenomenal people, and whoever will win this year is a much needed departure from this year’s poisonous working culture.”

This is why Dollar, with his running mate Sierra Jeter, wants to run for president and vice-president of WSGA; even though they are young, they believe they can bring the change that they think is necessary to Washburn University.

Running as a freshman could scare some people, but Dollar couldn’t be more unfazed.

“I want to run as a freshman because I am not completely corrupted by the politics and the drama yet,” said Dollar. “I have new perspectives, and as a freshman, I had an idealistic view of what student government can be.”

“He is ambitious and aggressive in fulfilling those ambitions,” said Harden.

Dollar thinks some current issues that Washburn University is facing are things such as tuition, unnecessary fines and focusing more on student’s mental health. His campaign has a 5 step policy plan that he will base his campaign on. The first is discipline policy: higher accountability, lower punishment. With this policy, he hopes to get rid of unnecessary punishment with an example of getting caught in your dorm room with alcohol and getting a fine for it.

The next is health and safety: student body and mind. With this policy, Dollar hopes to provide easier access to counseling, focus more on mental health, and make campus a safer environment by focusing on creating safety features on campus that work as well as adding adequate lighting to the parking lots.

The third is campus cohesion: collaboration is key. Here he wants to actively be building relationships with other student organizations, provide more volunteer opportunities and create a WSGA advisory council; this council would be a council of the largest groups on campus coming together to have one collective voice for the students.

The fourth campaign policy is quality of life: making a high-quality campus. To accomplish this, Dollar wants to focus on flexibility for meal plans and in the dining hall and streamlining academic advising to make it clear for majors. He also wants to make sure people get their money’s worth and provide more recreational opportunities on campus by adding hammocks and outdoor seating as well as board and table games.

The last is bigger than Washburn: put Washburn on the map. To achieve this, Dollar wants to have more community service in Topeka, creating better lines of employment between the campus and the Topeka Community, and create relationships with other universities in Kansas.

Dollar wants to be the voice of students who aren’t able to speak up or don’t want to.

When asked what figure or figures inspire him, he explained that it is the student with mental health issues, the student who is struggling financially but shows up to class to maintain a 4.0 and the first-generation students.

“Those are the students that inspire me,” said Dollar.

Dollar finished off by saying that his campaign is ready to make change.

“Look at the two campaigns, or two options and ask ‘which is going to keep the status quo and, which is going to help us bring a shared vision to life?’” said Dollar. “Our shared vision is to get a tuition refund, to get better mental health and to provide students the financial success of not being fined as a punishment. That is what our campaign wants to do.”