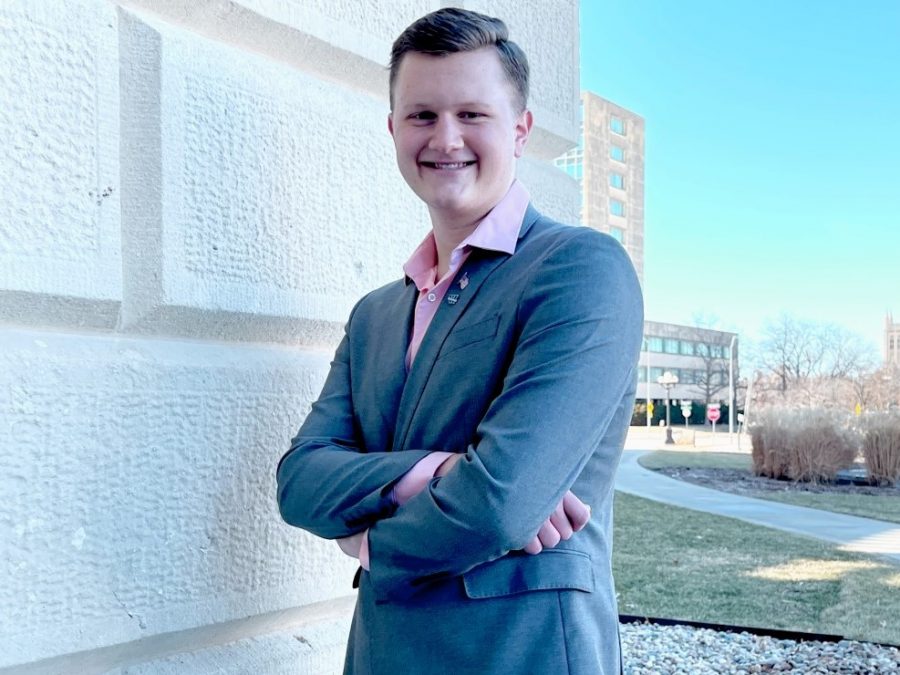 Purpose and Vision: Dylan Babcock is the vice-presidential candidate alongside his running mate Abby Trautman. His four-point plan includes bridging gaps in the Washburn community and addressing issues like mental health and diversity.

Not many students arrive at their university with a set plan in mind or goals to accomplish but for senior WSGA vice-presidential candidate Dylan Babcock, this was a foregone conclusion.

He joined the WSGA during his freshman year as a student senator and quickly laid the foundations for his path into student leadership. Now, he wants to give back to his school and community by taking up this important leadership position alongside his running mate, Abby Trautman. The two of them hope to piece together the “puzzle” that is Washburn in 2021.

“It is going to take all of us, working together, to build back and form the Washburn that we envision,” said Babcock. “This work will be like the process of doing a puzzle… which happens to be our campaign theme. Every student, faculty, staff and visitor represents a piece of our Washburn puzzle.”

Coming from a small town in rural KS, Babcock was involved with student council  throughout his high school days. He saw it as important to participate in the school’s activities, have a say in what happened over the years and help get things accomplished.

Babcock is currently in his third year at Washburn and is a double-major in economics and finance with a minor in leadership studies. His resume has further been bolstered by various positions that he has held while being a student at Washburn including being involved with the Student Leadership Council through the Leadership Institute, the Millennium Fellowship and the vice-chair of the campus Community Affairs committee. He is also the current vice-president for WSGA, having taken over for Mayela Campa after she graduated last year.

“I would just say that I think that Abby and I have gotten a lot of different experiences here at Washburn,” said Babcock. “She has served with WSGA as well all of her years at Washburn. We feel that we have a lot of that needed experience, built a lot of connections with people on campus over the years. We know what role student government can play in students’ lives and how it can make them better. We know who to talk to to make that happen if we were to become the new president and vice-president.”

Babcock outlined the four-piece puzzle that he and Abby had constructed to address the major issues that they plan to tackle if they win the upcoming election. Babcock and Abby have labeled these pieces as envision, adapt, bridge and capture.

“Our campaign theme is a puzzle and, when putting together a puzzle, obviously you’ll come up with problems,” said Babcock. “Diversity and inclusion, mental health, environmental sustainability, those are some of the issues we hope to work under that pillar.”

“We want to bridge the Washburn and Topeka communities and focus on how we can get students more involved in the local community,” said Babcock. “Washburn nights downtown, forge better partnerships between the school and the city just so we can be better informed from those people.”

“Our theme is a puzzle so as you near the end of building that puzzle, you look back at the work you’ve completed and feel satisfaction upon completion,” said Babcock. “Abby and I know some of our ideas are pretty bold and we won’t be able to get them accomplished without the student’s help. We’re really going to emphasize reaching out to students more and find out their opinions on issues.”

Babcock and Trautman have described their primary objectives to promote campus mental health services, improve diversity and inclusion and foster better relations between Topeka and Washburn as ambitious but attainable during their year-long term.

“The things that we have picked to be a part of our campaign are very specific things on campus that we know can happen during our time and administration if we were voted in,” said Abby Trautman. “So, yes, some of our things may seem like things we’ve worked on before because it’s something that’s been an issue for students for years.”

Babcock and Trautman’s campaign would not have been possible thus far without the help of their supporters within WSGA and beyond. Their campaign manager, Shayden Hanes, a sophomore majoring in business with a minor in leadership studies, said that it has been a group effort to support the two candidates.

“I’ve been fortunate to see them [Babcock and Trautman] in a variety of different capacities on campus,” said Hanes. “Dylan and I were on a leadership forum together where I got to see him in a different aspect. I saw him as a leader when I attended that conference with him.”

She went on to describe how she’d seen Babcock and Trautman in a variety of leadership roles on campus during her time at Washburn and admired them for their experience and willingness to listen to others and put their ideas into consideration.

“I can’t put into words the amount of respect I have for both of them,” said Hanes.

One might ask what drives a pair like Babcock and Trautman. For the vice-presidential candidate,  one figure came to mind.

“The mayor [Michelle De la Isla]  would be one, I’ve followed her on a lot of different things,” said Babcock. “The work she’s taken on in Topeka is impressive. I think she is a wonderful person. The way she conducts herself as a leader is impressive.”

Babcock is not lacking in experience, especially when student leadership is concerned. Last year, he was tasked with planning the 2020 WU Fest in the fall. With COVID hanging over the event, Babcock was forced to take extra precautions in the planning of the large-scale event which drew dozens of students, teachers, and others to the center of campus.

“I ran into many small challenges during this process as our advisor, Isaiah Collier, or the Union Director, Becky Bolte, would inform me of a step I would need to take that I had not yet thought about,” said Babcock. “I worked with each of these new steps as they came and ended up being able to get everything in place to hold the event. After going through a number of challenges while planning this event in what was already a big challenge because of COVID, I was very happy with the work I was able to do to hold this event.”

Babcock and Trautman will be tabling next week leading up to the election day and increasing their activity on social media. Babcock can be contacted at [email protected] or 785-670-2349 if you have any questions. You can follow along with their campaign at trautman_babcock on Instagram.

To witness Babcock and Trautman in action during their recent debate with Harrison Dollar and Sierra Jeter, visit the Facebook Live recording here.

Keep an eye out in the student union for Babcock and Trautman as they make their final preparations before election day on March 16. Remember that voting is a great way to participate in improving our campus and changing it for the better.