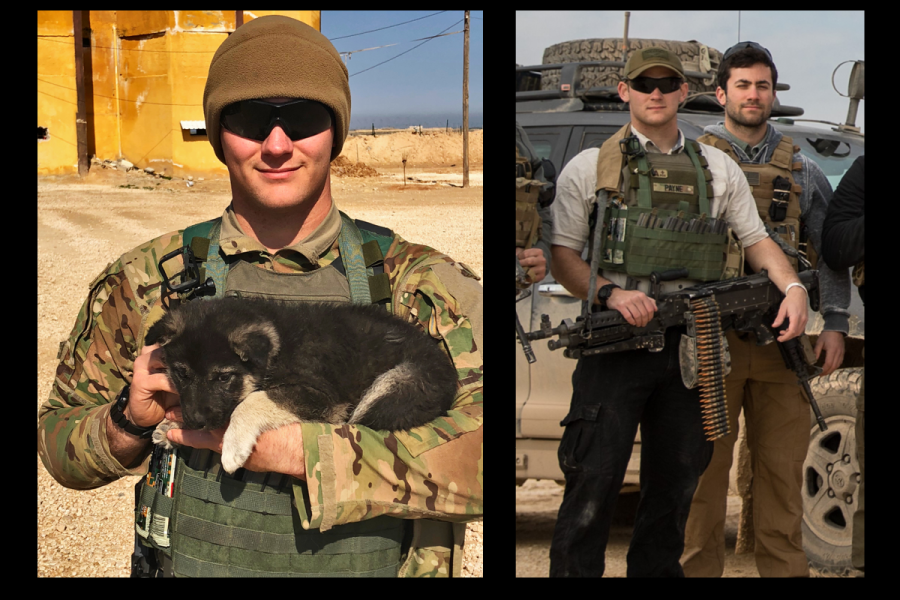 Corporal Ethan Payne is a 23-year-old Kansas Army National Guard infantryman. Payne currently works at the Washburn University School of Nursing as an office assistant, but he is also the president of the Washburn men’s rugby team and is currently studying criminal justice.

“I had known for a very long time, like since I was a small child, that I wanted to go into the military,” said Payne. “I just loved it; I loved the tanks, the guns and war movies.”

Payne said he is colorblind, and that this was a major obstacle when trying to join the military.

“I had a lot of issues with trying to be a pilot, which was originally what I wanted to do,” Payne said. “The Army is literally the only branch with combat arms that will look at you if you’re colorblind, so by default I ended up there, and even then, there were a lot of jobs I just couldn’t do.”

Payne joined the Kansas Army National Guard when he was just 17.

“I knew my color vision was going to be an issue, so I decided that I was just going to start trying,” Payne said. “I knew would have to go back a couple of times, but I went up and everything was good.”

Payne ended up going to basic training between his junior and senior years of high school, then returning for infantry training after he had graduated.

Transitioning to military life was not difficult, according to Payne, and once he was there, the people were his favorite part.

“I have a really good group of friends that I met in my time, and they are some of the best people; they make me laugh,” Payne said.

“Ethan is energetic and desires to succeed in everything he does,” Bowers said.

Bowers also described Payne as a natural-born leader, someone compassionate and sincere who carries that energy and leadership onto the rugby field as well as in military life.

“I know, having seen him act as a military leader, that he is the same kind of person as a squad leader as he is on the field,” Bowers said.

Payne’s leadership ability and dedication were recognized during his service time as well when he was chosen for a special mission with the state department to protect the city ambassador for Syria.

“We ran over 60 missions and got to drive over 10,000 miles in Northeast Syria and just go to all these places. It was super cool; it was a great mission,” Payne said.

This mission in Syria is among the things Payne is most proud of that he has accomplished during his military service.

Another mission Payne said that he was recently involved with was a COVID-19 relief project called the “Million Meals Project.”

“We were just making food,” Payne said. “We would go hand it out to people in the community.”

Payne also said that he really felt like they were making a difference for Kansas communities. Payne said that loving what he does with the Kansas National Guard has made the transition from deployment back to normal life very difficult.

“You go from you are the news, you know the news before it’s coming out, and you’re getting all this intelligence about what’s going on in your current location, and it’ll hit the [U.S. mainstream] news two days later,” Payne said. “When you’re there, you feel like you’re making a difference. Then you come back, and you’re just some dude in a crowd of people.”

Payne is not sure yet where his future is taking him.

“I have had a lot of goals, and 90% of them get shut down because I’m colorblind,” Payne said. “I’m still working on that one.”

So, for now, Payne is studying criminal justice and working on his next steps.