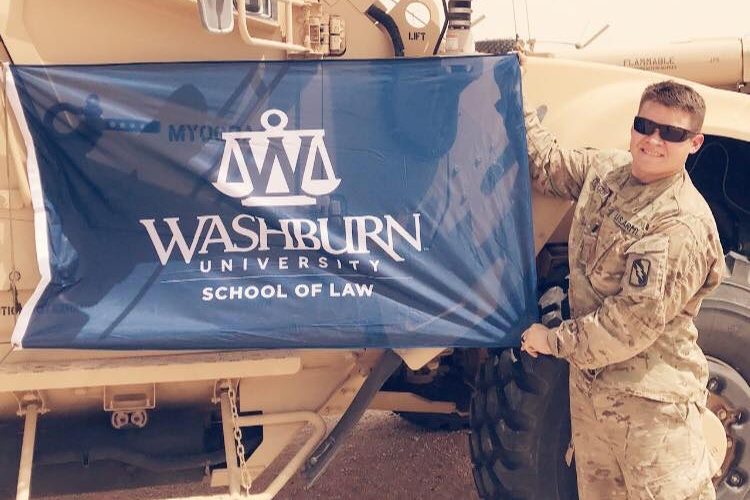 “Guard zealously your right to serve in the Armed Forces, for without them, there will be no other rights to guard.” – President John F. Kennedy

These words were spoken a long time ago in very different times than the ones we live in now. Despite this gap in decades, however, there is still great potency in the words of Kennedy. Such a statement defines the premise for our gratitude to all our armed forces, and particularly in the case of Capt. Silas Minkevitch, a member of the Kansas National Guard and a battery commander in Newton, Kansas.

Minkevitch is also a student of law at Washburn University, and he has achieved all of this at the age of 27.

The defining childhood memory of the entire millennial generation might very well be the tragedy of 9/11. Minkevitch was 8 years old when the first plane struck. It is a memory that he said was burned into his brain and a big reason why he chose to serve as soon as he could.

This transition to military life was not an easy one. Minkevitch was 18 when he joined, straight out of high school, and had a difficult time adjusting to the strain of boot camp. He persevered though and carries still the lessons learned during this time with him.

“You learn to let go of material things,” Minkevitch said.

Anything you can’t carry, you can’t bring when you’re on a mission, Minkevitch said. It boils life down to the necessities and makes you see and value what is important. This kind of personal discipline is a value that can only be learned through sacrifice.

Andrew Lowe, a friend and fellow law student, said that Minkevitch’s discipline is witnessed by those who know him.

“I can’t speak enough about his work ethic,” Lowe said. “Minkevitch wakes up early; he always gets his stuff done on time. It’s more of that military routine that I see from him. It’s just a very strict schedule; he just works hard.”

This lesson of discipline and hard work is one that was strongly reinforced during his tour in the Middle East. Minkevitch saw the way people lived in other countries and the hardships that they endured. He met many different people from outside of the United States and saw different ethnicities and backgrounds come together and learn to work for a common goal. He realized that there are good people everywhere if you can just find a way to reach them.

“The military is more of a service than a benefit,” Minkevitch said.

Minkevitch always tells people that if you join expecting to get more out of the military than you put in, it won’t profit you in the long run. Yes, there are great benefits for soldiers, but ultimately, it’s a service to the nation and your community.

This view would seem to permeate everything that Minkevitch does in his life as another friend, Danielle Welborn, pointed out.

“He has a big heart,” Welborn said. “He cares for everybody no matter what is going on in their life or his life.”

Despite the glowing commendations of his friends, Minkevitch doesn’t view himself in any special way. He tells the story of his life and experiences as a matter of fact.

Minkevitch has high hopes for the future. He plans to finish his studies this year and graduate to practice law in the military as a judge advocate general. JAGs, as they are called, handle legal matters involving the military mirroring the civilian law practitioners. Minkevitch plans to serve the full 20 years in the Kansas National Guard and hopes to continue practicing civil law after his retirement.

Minkevitch believes that the military has been nothing but a positive influence on his life because his time in the armed forces has given him the tools to succeed while experiencing life to the fullest.