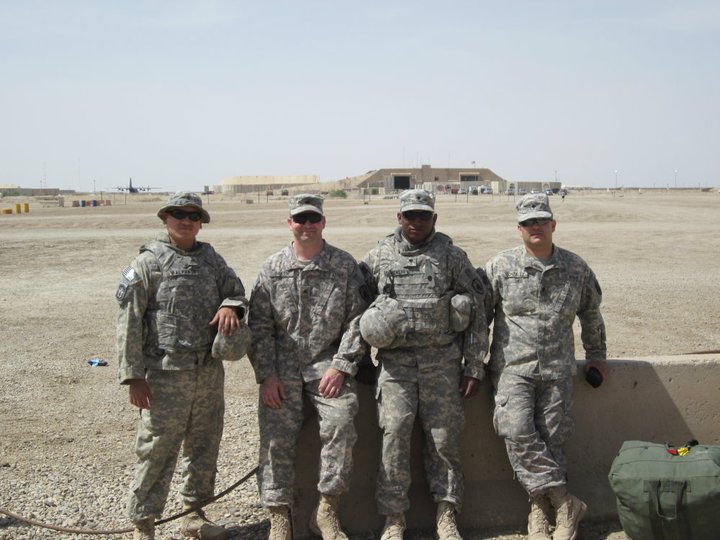 Jimmie Baker is a student at Washburn University who has served in both the United States Marine Corps and the Kansas National Guard.

Even as a kid, Baker had an affinity for the armed forces.

“My thing was a soldier,” Baker said. “They were rough and tough and never let anyone get hurt.”

Baker’s uncle, a career Marine who served three combat tours in Vietnam and was at the embassy bombing in Beirut, also influenced his decision to serve.

“My uncle was there at that time and almost got killed, so I felt determined to do my part and share the pain,” Baker said.

Baker turned 18 on Sept. 24 and was snapped up by his recruiter at 4:30 a.m. After processing in Kansas City, Baker was thrown on a flight to San Diego for basic training.

At first, Baker wanted to go into the infantry, but was placed in logistics by recruiters due to his high ASVAB test score.

“My job was beans, bullets, and band aids,” Baker said. “I could order anything needed to go fight war.”

Logistics involves all of the planning, management, and movement that is needed to operate in the armed forces.

Baker found his first love in the Marines. He completed four years of active duty service where he toured in both Japan and Iraq.

Although Baker worked in logistics, he still had to be ready to go to war at any moment as a Marine.

After his enlistment was up, he transitioned to civilian life for 12 years before enlisting in the Kansas National Guard, where he still works today as a staff sergeant.

“Jimmie was my supply sergeant,” said Terry Ralston, a veteran aircraft mechanic in the Kansas National Guard and a Washburn mass media major. “When we needed anything, we went to him and he got it for us.”

It is clear that there is a strong sense of comradery in the armed forces. Baker emphasized that although he doesn’t keep up with everyone he served with regularly, they could call him today and he would be there for them.

Heath Albert, staff sergeant in the Kansas National Guard, shared that he had the opportunity to meet people from all walks of life and that he considered those he served with as family.

“[Baker] took an indefinite job working for me as a supply sergeant,” Albert said. “He was definitely the loose canon out of the three of us, but we had a good working relationship. We made absolute miracles happen.”

Albert reminisced on some of the light-hearted moments he and Baker had while serving, such as the time Baker did a 180 in the air and acted like he was the karate kid when they saw a snake. Another fond memory was when Albert helped kidnap Baker to take him out to eat for his birthday.

“Baker’s a prankster,” Ralston said. “He likes to joke and have a good time but is serious when he needs to be.”

Although there are a lot of pluses to serving in the armed forces, there is a lot of baggage that comes with it.

“You take on a lot of personal loss,” said Baker. “That’s the hardest part.”

Despite the hardships of serving in the armed forces, Baker said that he is proud of his service and finds hope in the fact that he filled a position that someone else doesn’t have to fill.

“I want to express my gratitude to other veterans who did not have an easy time,” Baker said. “I didn’t have it rough at all in comparison.”

Now, Baker’s at Washburn pursuing a degree in occupational therapy and expects to graduate in 2022.

“I went into occupational therapy because I have a little bit of damage and understand the mindset that you’re less than because you’re beat up,” Baker said. “I want to get people back on their feet and show them that they can conquer.”