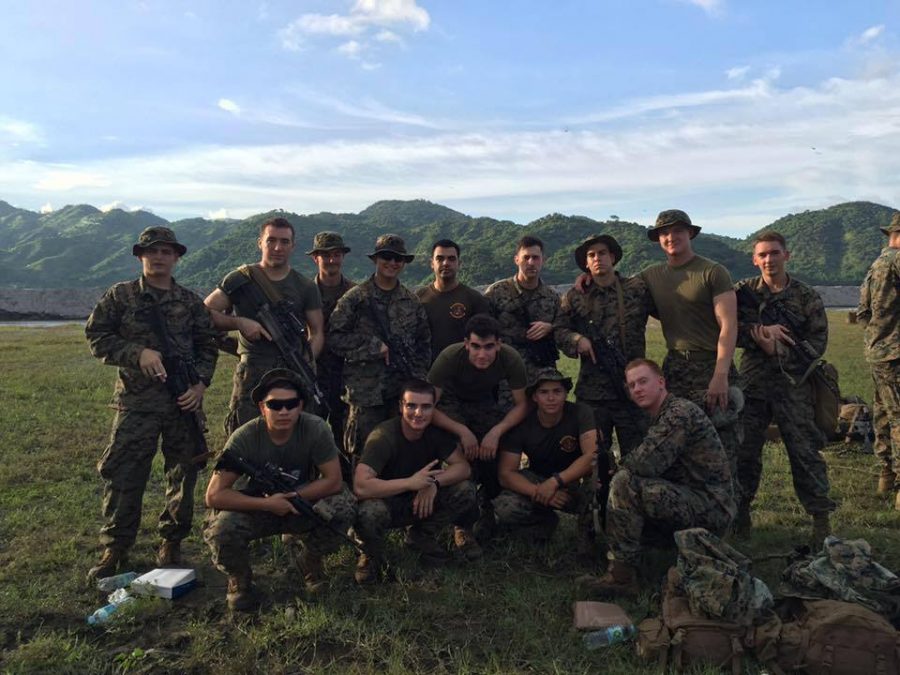 Jacob Cross, a 24-year old veteran of the United States Marine Corps and a criminal justice major at Washburn University, enjoyed doing all the “cool things” during his service, like shooting the big guns, riding in helicopters and blowing things up, during his enlistment, but at the end of it all, he feels his biggest accomplishment lies in the men he was responsible for.

“What I’m most proud of is the Marines I was able to train and the esprit de corps and skills I passed on,” said Cross. “I was able to mold some incredible Marines and even though I’ve done some advanced things in the military, I’m proudest of those men who for a short time I got to take on.”

Cross enlisted in the Marine Corps right after high school in 2015, which he graduated from a semester early. A week after finishing his education, he was in boot camp for his 13-week stint.

“I’ve always liked camping and hunting outdoors and doing physical things like that, but my grandfather, a former Marine, had a big impact on me picking the Marines,” Cross said.

After Cross graduated from boot camp, he went into a year-long training to become a mortarman, MOS 0341, a position that can be thought of as a bridge between infantry and artillery with training to operate weapons used to provide support for ground troops.

Cross had two deployments aboard Navy ships during his service, the first took him to Okinawa, Japan, the Philippines and Guam. On the second, he went to Hong Kong, Singapore and Australia.

“Being a 19-year-old Kansas boy and going to Okinawa and then Hong Kong was mind blowing,” Cross said. “My dad always asked me what I thought of the people I met, like the Aussies, and you know, people are just people. A southeast Kansas rancher is the same as an Australian cattle rancher. They’re the same people with the same concerns.”

While travelling across the world was an eye-opening experience for Cross, at times, it was difficult to keep in touch with his family back home, such as when shipboard in the south Pacific, when Cross’s days were his family’s nights because of the time change.

“You do your best to stay in contact, but people back home have to accommodate the military responsibilities you have and both parties have to be prepared to work hard to maintain the relationship,” Cross said.

After his four-year enlistment, Cross found himself being persuaded by his younger brother, Seth Cross, to come to Washburn for his bachelor’s degree because that’s where he was majoring in business.

“Jake and I have a ton of fun together and have always had a great relationship, so I was hoping he would decide to come to Washburn after his time in the Marines,” Seth said. “He already knew some people here, and he would have me to help him enroll and take care of the business side of things while he was still enlisted, so it just made sense. It ended up being a really great situation for both of us as we help each other out a great deal.”

Cross has since come to love studying criminal justice and plans to go into federal law enforcement after graduation.

“I had a first sergeant who came and spoke to me when I was up for reenlistment,” Cross said. “He told me that as a Marine, there’s nothing wrong with me going back to my hometown and being the county sheriff, but with the skills the Marines have taught me, why not aim for something bigger, and for me, I’ve decided to do my best to get into the United States Marshals Service when I’m done with my degree.”

Although Cross is a young veteran, and calls himself a post-9/11 veteran, he’s proud of what the military taught him about people.

“I had the honor of being in the Marines with some very diverse people who were all passionate about serving this country,” Cross said. “The military is what I like to call a meritocracy at its best because it doesn’t matter where you’re from, the color of your skin, or your gender. If you can get the job done, then that’s all that matters.”