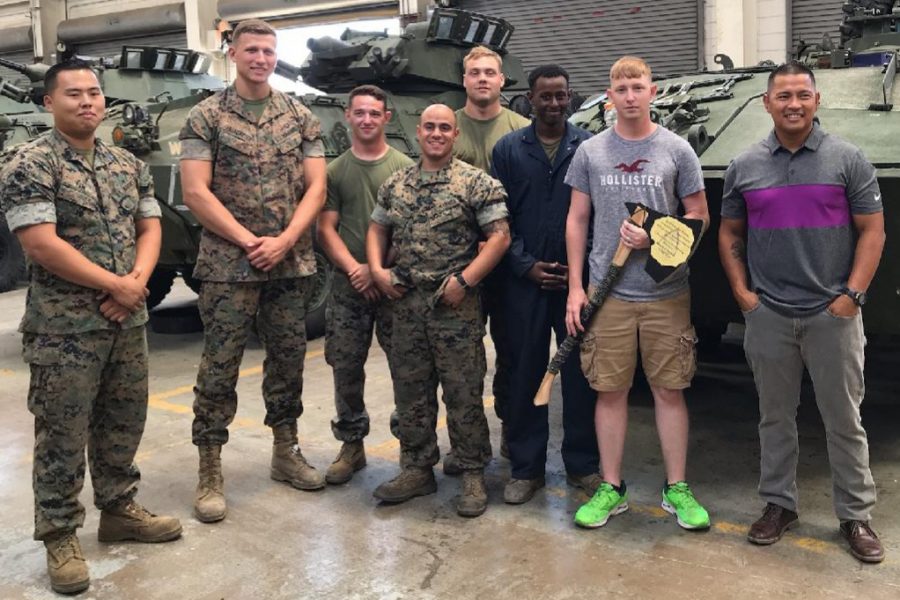 Fellow Marines present Andrew Kaufman with the axe during one of his last days with the unit.

At age 5, Andrew Kaufman wandered Worlds of Fun alone. He was not lost, but rather, looking for a friend. Unannounced to his parents, he slipped off to recount his adventures to whoever caught his eye. On that sweltering summer day, it was the older gentleman who had just sat down to catch his breath. Kaufman made his way over and sat right down. Before the gentleman had the chance to speak, Kaufman began to share the details of the rides he rode and the ones he would like to ride.

Perhaps it was because the gentleman was alone, or maybe it was his smile that called to Kaufman. Regardless, he was a friend, for Kaufman has never met anyone who was a stranger.

“He is good at helping other people when he sees a need,” said Robert Pugh, Kaufman’s great uncle. “He has seen struggle, but he never lets anyone struggle alone.”

Kaufman is the oldest of four and grew up in Clearwater, Kansas, where he graduated in 2014. He spent his free time camping, fishing and going to the races with his father, Todd Kaufman, in Belvue, Kansas.

“I joined the Marines right out of high school,” Kaufman said. “Living in a small town makes it hard to get out.”

Ten weeks into his journey to becoming a Marine, Kaufman suffered an ankle injury that resulted in a three-week setback.

“All he wanted was to get through,” his father said. “He persevered and went through the Crucible with an injured ankle.” The Crucible is the final test Marines complete, and it takes place over a 54-hour-period and includes food and sleep deprivation and over 45 miles of marching.

After boot camp, Kaufman went through job training to become a combat tank repairer, which was the first of many mechanic positions he would hold over the next four years. He was stationed at Camp Pendleton, California.

“I have always been mechanically inclined,” Kaufman said. “It got to the point where I did my job well enough that they left me alone.”

Kaufman completed one deployment with the Marines, which took him to roughly 12 countries, including Vietnam, Taiwan, United Arab Emirates and Kuwait.

“We got to go to Dubai, which was really cool,” Kaufman said. “They have the biggest mall.”

Due to the nature of his deployment, Kaufman found communication with those back home difficult.

“It wasn’t easy,” Kaufman said. “I would pick up a souvenir that reminded me of my wife each place we went.”

The Marines taught him how to cope with a fast-paced lifestyle that allowed little sleep and brought constantly changing deadlines.

“In the military, you have challenges all the time,” Pugh said. “The biggest for Kaufman was to concentrate and carry out all tasks given to him.”

Kaufman left the Marines as a corporal, however, he also left with the admiration and respect of his unit. On his last day with his company, he was rewarded with the axe handle, an honor that is normally reserved for commanders in his unit.

“This was probably my proudest moment as a father,” Todd Kaufman said. “To hear everyone in his unit tell stories about him and what he meant to the unit was pretty awesome.”

During his contract with the Marines, Kaufman discovered a passion for traveling. After leaving Camp Pendleton, he took a post with the reserves in Kansas.

Kaufman and his wife, Eva, have settled in Topeka, Kansas, with their three golden retrievers, Carmel, Bailey and Mocha, while he completes his degree in marketing and accounting at Washburn University and his wife completes medical school at the University of Missouri Kansas City School of Medicine. “We came back to be close to family,” Kaufman said.

Kaufman plans on being an accountant like his father until he can open his own woodworking business, a skill he learned in high school and is still passionate about.

“Andrew is the kind of kid who will always give you an honest answer,” Todd Kaufman said. “If you are on his good side, he will do anything for you.”