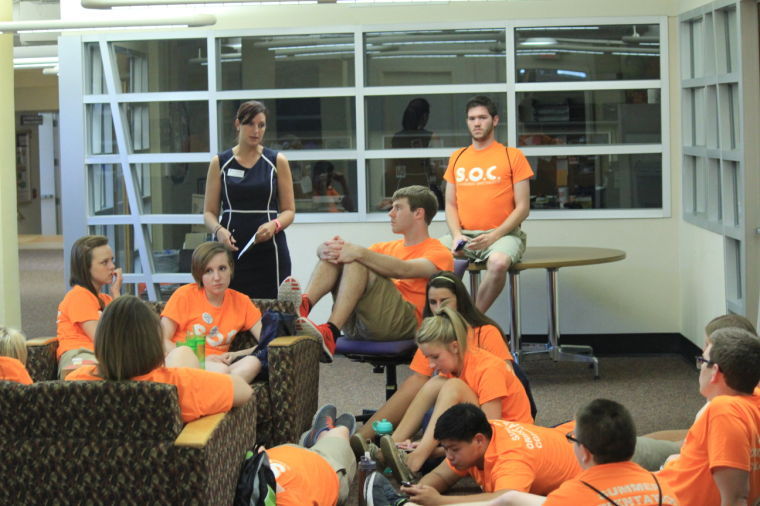 The summer orientation counselors gather in the lower level of the union after an orientation session.

Each summer Washburn holds new student orientation sessions where incoming freshmen and transfer students are able to enroll in classes and become acquainted with the university.

The office of enrollment management hired Mckinlaye Harkavy to fill the newly created position of director of new student orientation in January 2014. Harkavy received bachelor’s degrees in English and political science from Denison University, a college in Granville, Ohio. After acquiring a master’s degree in higher education and student affairs from the University of South Carolina, she began working as a new student advisor at the University of Texas at Austin.

Harkavy works with 22 summer orientation counselors. The SOCs are current Washburn students, who give tours to the new students, introduce them to different parts of campus, help them feel at home and even teach the new Bods the Washburn fight song. There are 20 SOCs and two SOC interns this summer. The SOC interns help determine which students are hired as SOCs.

After the SOCs have finished their part in the orientation, the new students and their parents or other guests visit the Washburn A/B room where different organizations on campus, such as WSGA, Greek Life and the honors program have tables set up. Representatives of each organization are designated a table and as the new students come by the representatives can explain their respective organizations. Students also have an opportunity to have their picture taken for the Kaw Yearbook.

Harkvay said she already has a vision of where she wants the news student orientation program to go.

“In terms of changes to the program, there really are quite a few things we are considering, and nothing set in stone yet,” said Harkavy. “I think we can expect some overall changes with the program schedule, and I’m really hoping to add more elements with faculty participation and more student-to-student interaction throughout the day.”

Working with the entire NSO program is still a learning process, Harkavy said. She is having this year’s program being run much like it has in the past so that she can understand how things currently work and make changes based on that. Although Harkavy has ideas on what to change to improve NSOs, she has been seeking input from others.

“We have this wish list that has easily over a hundred things on it that different people and different departments want to see change, and as I think we move forward and change the program I think that’s really what’s going to help shape it,” said Harkavy. “It’s not just about my ideas. I came in and I’m not from Washburn and I’m not a Washburn alum and I think, that being said, Washburn’s a special place, and so it’s important that I take the time to learn about Washburn and understand the culture before we go make a lot of change.”

Harkvay said plans for change will be more concrete this coming fall.