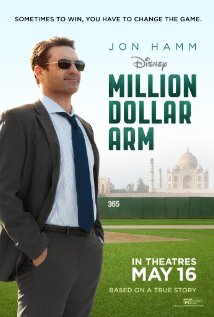 With “Million Dollar Arm” out in theaters since May 10, I finally went to see it. I am a huge fan of sports movies but this film in particular had much more than baseball. In fact, it had more of a plot than just baseball.

“Million Dollar Arm” is based on a true story about a Los Angeles sports agent named JB Bernstein and his attempt to make his struggling agency into a success. JB, played by Jon Hamm, comes up with a plan to travel to India to search for a cricket bowler to transform into baseball pitching stars. The tile of this film comes from the contest that JB created called “Million Dollar Arm.” JB finds two boys, Rinku Singh and Dinesh Patel, which he brings back to Los Angeles to train for tryouts for the major leagues. Rinku is played by “Life of Pi” actor Suraj Sharma and Dinesh by Madhur Mittal from “Slumdog Millionaire.” However, JB doesn’t realize that his bachelor, carefree life is going to be turned upside down.

Like I said, this film focuses on more than just baseball. In fact it focuses more on JB’s life, which includes romance. It also focuses on the cultural differences and lifestyles between the two countries. However, I am not giving up the entire plot. I wished that this movie would have had more baseball in it to make it a stronger film. This 124 minute film focused more on JB and less about the boys learning to play baseball, which I think made this movie suffer.

Hamm did a good job with his character development in this movie. I was convinced in the beginning of the movie that he was a confident sports agent living the bachelor life and at the end when he transforms into a caring man wanting a different lifestyle.

My favorite character in “Million Dollar Arm” is Amit played by Pitobash. Amit is an Indonesian who loves baseball but is too short to play. His character adds humor to the entire film. Amit’s character also made me tear up toward the climax of the plot. He is a very lovable character.

Although “Million Dollar Arm” only made $10.5 million during its opening weekend, it continues to do well each weekend. I’m giving this movie a 4 out 5 stars because of its lack plot creativity. It is still a worthy movie, but not one for sports fans.