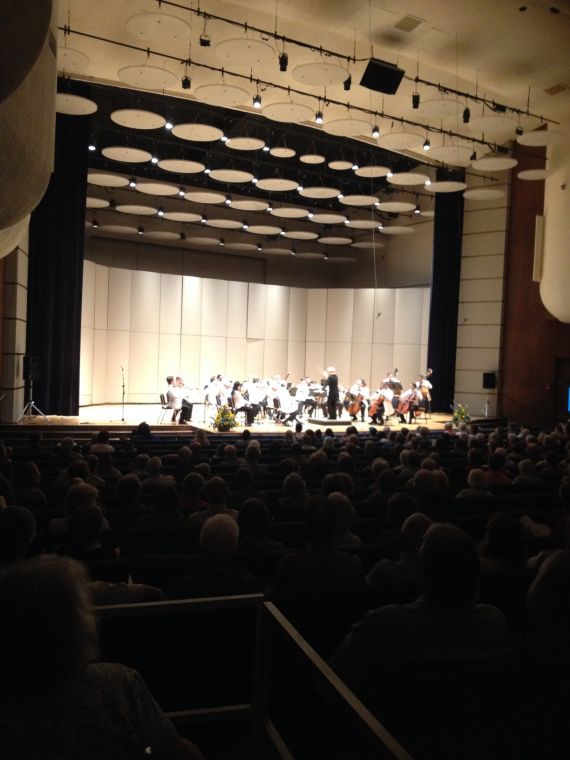 The Sunflower Music Festival, with Charles Stegeman, artistic director, began Friday, June 6. The festival presented its first concert as the beginning of their annual 10-day engagement of orchestra concerts and chamber music, with lead-chair concert master musicians playing from around the world.

The event is being staged on campus at the Garvey fine Arts Center/Mulvane room in the White Concert Hall seating area. Businesses, private donors and private sponsors and foundations support the concerts, enabling them to be free of charge to all who would like to attend.

Fourteen years ago the acoustics, lighting and sound in the venue was refurbished. The facility is now one of the top concert halls in the Midwest and seats 1,117.

“It takes a lot of people to put this event together,” said Carole Hawkins, festival coordinator. “There are a lot of assistants and none of them are paid to do all of this work.”

As soon as the festival is over, the volunteers begin their planning for next year’s festival. Hawkins said that concert masters travel to the Sunflower Festival each year to be at Washburn University. It is also an opportunity to play with others at the same level.

“We have very serious lead chair concert masters that come from different countries and represent four continents,” said Hawkins. “Our concert  conductor this year is a woman from Manchester in Great Britain who resides in Berlin. We have some of our musicians from St. Petersburg in Russia who reside in Berlin also at this time.”

Charles Stegeman, co-founder of the Sunflower Festival, was a child prodigy and is a highly accomplished musician and impresario known for his artistic vision.

“We have fabulous, fabulous festival musicians,” said Karen Geyer,assistant festival coordinator. “I don’t think people realize how accomplished they are. It is exciting to have the caliber of musicians we have here at the Sunflower Festival every year.”

To begin the evening, Mayor Larry Wolgast was one of the speakers.

“Welcome to the arts and culture of the city of Topeka,” said Wolgast. “This is one of the cultural highlights of our community and it adds a significant dimension to who we are.”

The concerts are comprised of national and international symphonies and musical schools. The musicians range in age from 14 to 26.

Blanche Bryden was at one time a non-traditional piano student at Washburn University. An institute was established in 1994 by her estate to fund and bring young highly talented musicians to the festival for the advanced study of chamber music for high school and college musicians, between the ages of 14-26.

It was renamed The Sunflower Music Festival’s Blanche Bryden Chamber Music Institute. These gifted students are given scholarships to study and to come together for a week of learning and accomplished performance, coached by the Sunflower Orchestra musicians. Each young musician must audition to earn a place in the festival.

Since that time, the festival has seen nearly 350 students come through who have been coached by Sunflower musicians and have performed in White Concert Hall and other venues in Topeka under the guidance and instruction of the master performers who gather in Topeka every year.

This year a student from Topeka named Rosalyn Taylor made it into the Bryden Institute. There are also two professors from KU who are playing in the orchestra and chamber music.

Crowds were waiting outside for the 6:30 p.m. opening of the doors to the concert.  Donna Waddell  are regular attendees waiting in the crowd.

The festival, which began 28 years ago, has had Phelps protestors from the Westboro Baptist Church from its early days, and the first night of the gala was no different, as Phelps protestors arrived with their signs to picket the evening.

The schedule for the 10-day event is as follows: