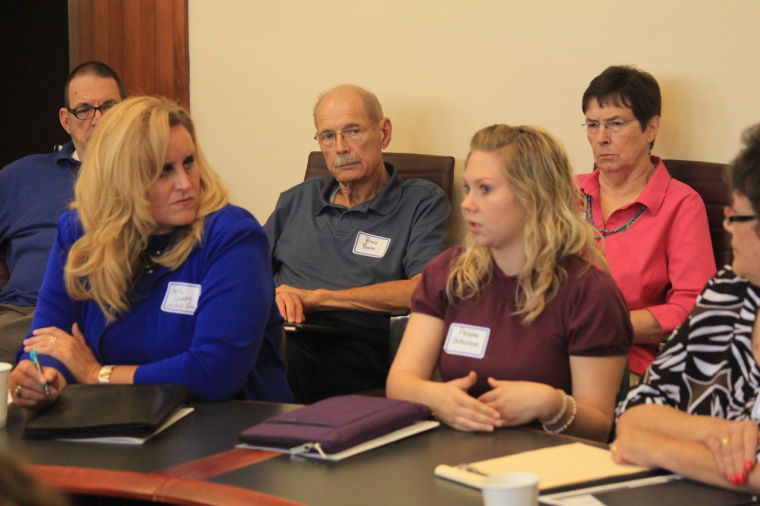 TCCOP brought together more than 120 participants from Topeka and the surrounding communities to discuss various causes and solutions regarding poverty in the capital city. The event was comprised of four breakout sessions consisting of multiple group discussions held in the upper level of Memorial Union, each covering a different aspect of poverty in Topeka. Each participant was free to attend any discussion of his or her choosing based on the topic.

Poverty in schools was one topic covered in the second breakout session. At each session a moderator recorded points of interest brought up in the discussion on an easel pad.

Twenty-four of the event’s participants attended the poverty in schools discussion. The discussion focused on youth education, particularly that at the high school level. One question that was brought up early in the discussion was whether or not the school district, namely USD 501, was responsible for dealing with poverty in schools. This then sparked the question of whether or not the school district actually wants help from the community. Those that answered the latter question all said yes.

The topic of success and its different meanings to different individuals was also discussed. The majority of the group agreed that many high school students see graduating high school, landing any job and paying rent on time as “being successful.” Looking to the future and making long-term plans, such as but not limited to starting a family, were ideas that multiple participants in the education field agreed were not prominent thoughts of many of today’s teens.

Mildred Edwards, executive director of the Kansas African American Affairs Commission and a member of the Kansas Board of Regents, said the goal isn’t merely to help students out of poverty but to help them reach their full potential.

“One of the things I think that we should be very, very careful in doing is singling out individuals that are experiencing limited resources, lack of access and some of the things that are the result of them living in an impoverished lifestyle, but to really look at these individuals as capable and really, really worthy of attaining the same level of lifestyle of others outside of the communities in which they reside and helping them to realize that potential through the educational supports, the emotional supports, the social supports that we could expose them to as a community in order to get to that level of self-pride and understanding that will automatically take care of the poverty issue,” said Edwards. “They pass it on. Once they understand who they are, what they’re capable of accomplishing and how they can overcome any challenge they’re confronted with, then that is a lifestyle change.”

Chris Bush, a member of Kansas Legal Services, also emphasized the importance of young men and women having roles models that they can actually reach out to and talk to, not celebrities such as Kobe Bryant or Michael Jordan.

At the end of the hour-long discussion, four pages of notes had been written by the moderator. The group narrowed the list of ideas regarding improving the school system down to a stronger, more engaged partnership between the schools and community, communication of the needs of students and volunteerism as elements that would best help decrease poverty in the schools.

The following breakout session offered a discussion group on mental health issues and programs in Topeka. There was a general consensus among the group of 18 attending that discussion that Topeka was once “the mental health capital of the U.S.” but now the agencies have moved but the clients have stayed.

“We’ve had the state hospital, Menniger’s and other clinics,” said Darin Scott, former caption of the Topeka Police Department and an assistant to the city manager. “All of the sudden society decides we can’t fund it.”

Scott said that if an individual with a mental illness is arrested due to behavior caused by that illness, jail is not the place for him or her.

Lindsey Spooner, the office manager and outreach for National Alliance on Mental Illness (NAMI) in Kansas, said that while the jail does have a mental health program, the treatment course which the program administers is not intensive enough. Spooner said the Topeka community needs to identify what other resources it has to help the mentally ill.

The Crisis Intervention Team is a program that was started five years ago by the Topeka Police Department. They specialize in dealing with situations involving aggravated mentally ill individuals. Anyone can call the police and request a CIT officer for such a situation. The CIT program handles immediate situations involving mentally ill individuals but also directs them afterward to an appropriate program to seek help.

Vernon White, department chair of business at Bryan University, said a lot of people do not realize there is a mental health problem or how serious it is. This prevents organizations and companies from funding programs such as CIT.

The discussion concluded with eight pages of notes. Unification of the message of the mental health issue, collaboration between organizations that do help the mentally ill, sustaining the progress mental health patients make in a program after they leave and family support were the points the group decided were the most crucial to vocalize to the community.

Lunch was served to all of the participants at 12:30 p.m., which was then followed by one final breakout session.

The idea for TCCOP started with Judy Nickelson, VISTA coordinator at Washburn.

“It’s been something I’ve wanted to do for a good while and it kind of gelled in mind early in the year…I started building a team,” said Nickelson. “A lot of the folks from my VISTA advisory council were part of the team. It just came together over a period of months.”

Nickelson said more meetings will come out of this. She is not sure at the moment whether there will be more entire community conversations like TCCOP or if there will be smaller events, but “this is definitely not a one and out.”