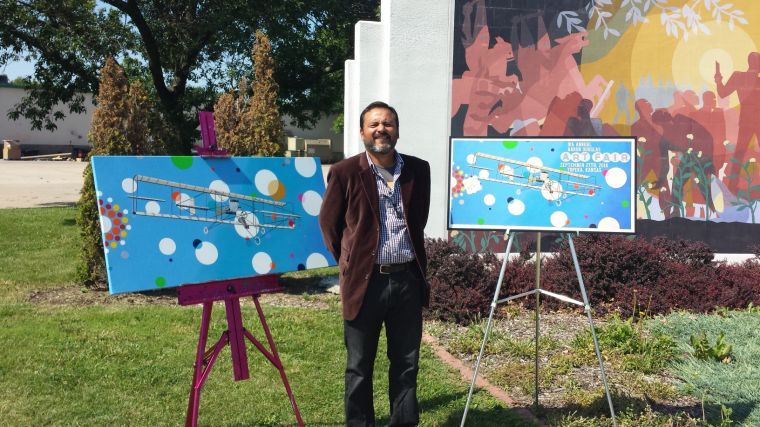 The Aaron Douglas Art Fair has chosen artist Jaime Colón to exemplify everything the event represents by naming him the featured artist. The fair will be held Sept. 27 at the Aaron Douglas Park.

“Because of Jaime’s strong desire to beautify Topeka, his love for art and bringing the community together, I feel that he is the perfect candidate for this year’s featured artist,” said Staci Dawn Ogle, art director of the Aaron Douglas Art Fair.

Colón received the “Character of Championship” award from Safe Street Coalition recently for his outstanding murals and his commitment for making Topeka beautiful.

“Once you start doing murals here, you start looking at the history of Topeka,” said Colón.

The Aaron Douglas Art Fair Executive Committee spends many hours considering who will be the featured artist of the year. The committee strives to pick an artist who best embodies the creativity and talent that Topeka has to offer, and one who inspires the artist in everyone.

Colón has lived in Kansas City and had to knock on many doors. He found it a hard market to break into for artists. He has shown his art in Topeka at First Friday’s in NOTO and has just signed with Alexander Lancaster’s Two Wolves and Artist Den in NOTO.

“I want to share this with everybody,” said Colón.

Colón who went to Hayden High School in Topeka and has not taken any art school lessons and is essentially self-taught. He wants to help open doors for others like the artists he sees on Facebook trying to get their art known.

On the verge of giving up before this honor was given to him, Colón now uses his experience to encourage other artists. This honor from Aaron Douglas Park is suddenly opening doors for him and he wants to tell struggling artists never to give up.

“I would like to see other artists who have never shown art before to bring their art here, whatever it may be, to the Park,” said Colón. “It is a fairly inexpensive cost to be in the show.”

Colón also stressed that the show is very family friendly.

“A lot of people bring their children because there are a lot of activities here for children,” said Colón.

There will be a “Kids Zone” with several art activities and interactive art for all. Thirty to 50 artist booths are anticipated to be there. There will be a main-stage with music and a second stage for acoustic music and other performing arts. There will also be hosted food booths.

Ogle presented Colón to the media and mentioned how he has been an inspiration to the community.

“Birdman” is the featured painting done by Colón about a real-life adventurer and inventor in Topeka around the turn of the century. His name was Albin Kaspar Longren. Birdman was his nickname because he built a working airplane, motorcycle and car on his own in the early days of these technologies. Some of his designs are still being used to this day in planes. His airplane can still be seen today hanging at the Kansas Museum of History.

The Aaron Douglas Art Fair, inspired by the completion of the Aaron Douglas Celebration Mural, has been an annual event since 2006. The intent was to create a one-day classic art fair in order to showcase diverse and emerging artists, to celebrate community and to continue the legacy of world-renowned Topeka-born artist Aaron Douglas.

The Aaron Douglas Art Park is located at the southwest corner of 12th and Lane, in the city’s Tennessee Town neighborhood. The mural in the park is by residents of Topeka in 2005 to memorialize and celebrate the mural done by Douglas,  who painted the original to show “negro life from slavery through reconstruction.” The original painting by Douglas is in a Harlem branch of the New York Public Library.

“The Aaron Douglas Art Fair is a great opportunity for artists to get their foot in the door of Topeka’s art scene,” said Ogle. “We’re working really hard this year to try to give artists in Topeka many opportunities to showcase their work outside of the fair.”

The art fair is accepting artist submissions through July 31. Those interested may email: www.aarondouglasartfair.com

There will be a featured artists unveiling party Friday, June 13 at P.T.’s Coffee on College Hill. Jaime Colón will be attending and local band The Oceanside Hotels will be playing from 8 to 9 p.m. There will be open mike times for $5 for 15 minutes.