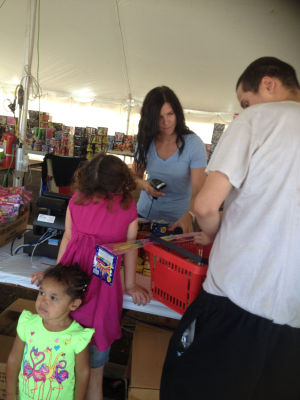 Thunder Bomb, Rollercoaster, Salute Cracker, Killer Bees, Super Magnum Artillery Shell, What a Girl Wants; these are just a few of the names of the fireworks and firework packages that you’ll find at one of the many fireworks stands in and around Topeka.

At the stand on the corner of 21st and Fairlawn, vendor Molly Hall takes payment from a customer while passing the goods off to the hands of their excited children. Hall said fireworks can cost anywhere from 10 cents to $190.

But for anyone who has decent hearing, the fireworks have already been going off since about June 27, when fireworks around Topeka began selling.

According to Topeka Police Officer Simmons, starting July 1, from 8 a.m. to 10 p.m. it is legal to set off fireworks.

“On July 4 they are legal from 8 a.m. until midnight,” said Simmons.

“We love them,” said Jon, standing beside his wife and new baby. “The bigger the better! The bigger variety packs are great. There’s nothing like celebrating the birth of our nation like blowing up a small part of it.”

Wendi agreed with her husband, but mentioned that they do have an emotionally disturbed daughter who can experience serious problems if exposed to fireworks.

Pat Wiles, a local apartment maintenance man, has his own issues with the holiday novelties.

“My dog hates them,” said Wiles. “He tries to eat them and he won’t stop barking. We have to give him a doggie downer. I don’t like fireworks, but I’m used to them. I used to buy them myself.”

The U.S. Consumer Product Safety Commission states that, in 2013, fireworks were linked to approximately 11,400 injuries and eight deaths.

The commission gave some important safety tips to follow:

Never allow young children to play with or ignite fireworks. Avoid buying fireworks packaged in brown paper because this is often a sign they were made for professionals and could pose a danger to consumers. Always have an adult supervise fireworks activities. Parents don’t realize that young children suffer injuries from sparklers, which burn at a temperature of about 2,000 degrees – hot enough to melt some metals. Never place any part of your body directly over a fireworks device when lighting the fuse. Back up to a safe distance immediately after lighting. Never try to re-light or pick up fireworks that have not ignited fully. Never point or throw them at anyone. Keep a bucket of water or garden hose handy in case of fire or any other mishap. Light fireworks one at a time, then move back quickly Never carry fireworks in a pocket or shoot them off in metal or glass containers. After fireworks complete their burning, douse the spent device with water from a bucket or hose before discarding it, to prevent a trash fire.

So follow some easy rules and have fun with some Killer Bees, Super Magnum Artillery Shells or whatever blows up your Fourth of July. Have a good and safe holiday weekend.