Kansas History Museum has more to celebrate than 30 years 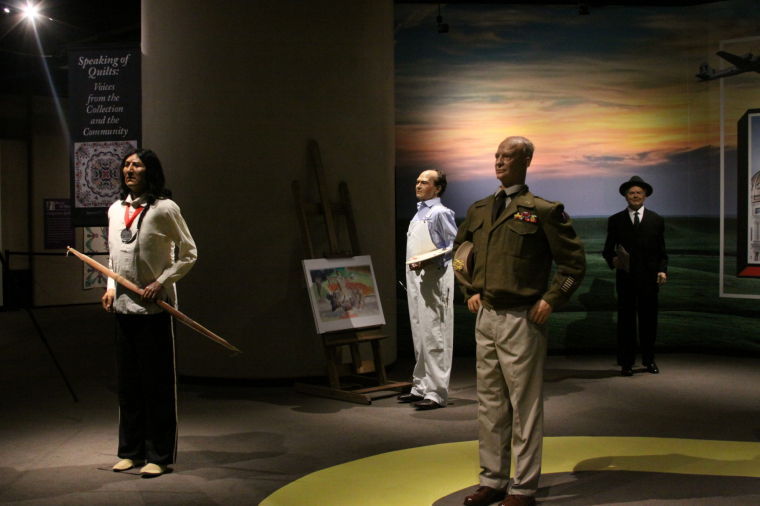 Satanta, William Allen White, Dwight D. Eisenhower and John Steuart Curry all presented for the Real People. Real Stories exhibit at the Kansas History Museum. This exhibit was created for the museum's celebration of 30 years.

“They represent the many, many notable Kansans we have, but we’ve tried to pick a variety to show everything from politics to art to reform,” said Mary Madden, museum director.

Variety was provided in all ways. George Washington Carver, “the best scientist in the world” according to President Franklin D. Roosevelt, and Satanta, a Kiowa Indians chief, represent the different ethnic groups that make up Kansas. Carry Nation, a reformer who spoke for the prohibition of alcohol, and William Allen White, the newspaperman from the Emporia Gazette who spoke for small town Kansas, represent the voices that have spoken out of Kansas in the past. John Steuart Curry, who painted the murals in the capital, Dwight D. Eisenhower, the 34th President of the U.S. and Amelia Earhart, the first female pilot to fly solo over the Atlantic Ocean, represent the overall variety of people that Kansas has produced over the years.

The exhibit features wax mannequins of all the famous Kansans it has chosen to celebrate. To the left of the wax mannequins is a wall with seven boards about the seven Kansans on it. Underneath the boards, there is a station where patrons of the museum can take a quiz to see which famous Kansan they are.

The inspiration for the new exhibit came a couple of years ago when it came time to decide what to do with the space where the orientation theater had once been.

“That space was used as part of the special exhibits area at different times,” explained Madden. “But lots of times, it was just kind of a big open gray area and we thought, well, when people come here, we want them to be really enthused, as enthused as we are, about our history, so we should put something there that makes them say ‘Wow! Kansas is really cool!…and want to learn more.”

Beyond the initial reaction to the new exhibit, Madden had only one word to describe what she wanted Kansans to take away from their experience at the new exhibit and the museum as a whole.

“Pride,” said Madden. “I hope they take pride in their state. We’re a wonderful state, and we have history that has changed not only…Kansas history, but they [the seven Kansans on display in the new exhibit] have changed the nation and the world.”

Pride is not the only thing that visitors to the Kansas History Museum will get from the museum. When asked if she thinks the history museum makes kids more interested in history, Krystal Falls, mother of four, turned to her daughter. “What do you think?” she said.

“Yeah,” the girl replied as she gazed at the display beside her. Falls went on to say that she thought the reason that the museum made history more interesting was the fact that it was interactive.

Emily Stuart, another girl visiting the museum, backed up the sentiment of Falls and her daughter.

“History is one of my favorite subjects and it’s really fun…it [the history museum] was fun because you got to see real stuff that they used…that was pretty amazing,” said Stuart.

“I think it’s [the museum] for grown-ups too…because the grown-ups…can see stuff…and be like ‘Oh wow, that’s fascinating’ and [learn about] stuff they didn’t know,” said Stuart. “I think it’s just for everybody.”

The Kansas History Museum, which is a part of the Kansas Historical Society, moved to its current location on sixth street in 1984 after the land was sold to the Kansas Historical Society at a discount. The grounds also boasts an old mission house, which is one of the oldest buildings in the state. It also has a library with archives, numerous education opportunities, including the opportunity to help out at an archeological dig, and a 2.5 mile trail in addition to the museum.

The museum itself covers every aspect of Kansas’s history, from the Native Americans who first settled here to the Civil War to the 1940s through1980s diner area and has an area specially dedicated to children. There are also classrooms in the museum and plans to build more classrooms.

“I want to get a turtle…and a salamander for it because those are two of our symbols,” said Madden. “I can’t get a buffalo in there. We have one in the gallery…but that’s a great way to have symbols and the kids will love it.”

The museum has several community outreach programs in place as well. The “Sundown Film Festival”  July 11, August 8,and September 12, which is a movie on the lawn of the Kansas History Museum, “West Fest” July 26, which celebrates National Day of the Cowboy and “Museum after Hours: A Night of Country” July 26, which will feature live music, dancing and games, are just a few of the upcoming events that the Kansas Historical Society is offering.

The museum is open from 9 a.m. to 5 p.m. Tuesday through Saturday, and from 1-5 p.m. Sunday. The price of admission is $8 for adults, $7 for senior citizens (65+ years of age) and military, $6 for students (Pre-K through college with an ID) and free for Kansas Historical Society members and children five and under who are accompanied by an adult. The museum is located at 6425 SW Sixth Street.