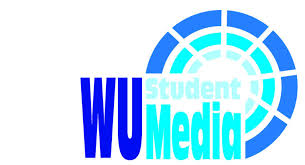 Two scenes for a movie based on Washburn professor Tom Averill’s short story, “The Musical Genius of Moscow, Kansas,” were filmed Monday, July 14 in North Topeka.

The short film, produced by Lawrence-based company Through a Glass Productions, began shooting in June. Topekans were invited to take part in the film, playing the role of a crowd. Men were to wear solid, dark colored shirts with no logos and jeans and women were to wear summer dresses, according to a flier put out by the North Topeka Art District.

Kansas Avenue was blocked off between NW Lauren Street and NW Norris Street. All but a few of the stores in that section had closed down for the filming.

Groups of different ages and families of different sizes alike showed up for the filming. Adults, teenagers and young children were all involved in the scene.

“We’re just going to be extras in the film,” said Melanie Hahn, a Topeka resident.

Hahn had heard about the event on the news. She was attending the filming with her family.

Rae Gager, another Topeka resident, had brought her grandsons to the filming.

Those interested in the film showed up to the scene at 4 p.m., though the filming did not begin until 5 p.m. In the interim, water and Gatorade were provided to the extras, actors and those who had shown up to watch.

Chris Blunk, a producer for Through a Glass, was directing the movie.

“I hope we’ll have [the film] done by the end of the summer,” said Blunk.

As of Monday, only a few more days of shooting footage was expected before the filming was completed.

About 10 people participated as extras, but there were many more who came to watch, including family members or friends of extras and those who just lived nearby. The scenes were shot near a railroad track and grain elevator.

Averill was out of town during the shooting of Monday’s scenes, but is very excited about his story being made into a motion picture.

“I was really pleased when Chris Blunk of Through a Glass Productions contacted me with his interest in adapting ‘Musical Genius’ into a film,” said Averill. “He has done fine work, first with adapting the story into a filmscript, and then in the casting and shooting of what will be a short film (around 15 minutes). Since NOTO is like a small town within Topeka, it seemed a good location to become “Moscow” for a day, complete with [a] grain elevator on the other side of the tracks.”

“Ordinary Genius” is Averill’s book which contains the short story “The Musical Genius of Moscow, Kansas” and can be found in the Washburn bookstore.