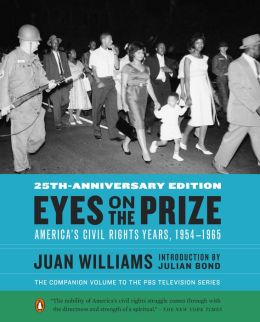 "Eyes on the Prize," the 2014-2015 iRead program book for Washburn University, is now available for purchase at the Ichabod Shop.  The book is required reading for the First Year Experience freshmen course.

“Well the only chains we can stand are the chains of hand in hand.  Keep your eye on the prize, hold on.”

Lyrics from a traditional spiritual song took new life when adapted to the Civil Rights movement in 1960s America.  This year those words will once again take on meaning to a new class of Washburn students committed to equality both in their own classrooms as well as the bigger picture.
Since the 2007-2008 academic year, Washburn University has incorporated the iRead program into the curriculum for the First Year Experience course.  The course is required for incoming freshman, with the defined goal of supporting the academic, social and personal transitions of all first-year students.
Last year’s iRead book selection was “Rode” by Washburn’s own Thomas Fox Averill.  This year’s choice is “Eyes on the Prize: America’s Civil Rights Years, 1954-1965” by Juan Williams, an author who has won multiple awards for his investigative journalism work.  His resume includes works from Fox News, The Washington Post and National Public Radio.
The book is celebrating its 25th publishing anniversary this year.  It tracks the progress of the civil rights movement from the moment of the Brown v. Board of Education decision to the passing of the voting act in 1965.
Through the chapters of the book, Williams focuses on a different aspect of the initial 10 years of the civil rights movement in America.  Although talk about civil rights connotes times gone by, Chante Mitchell, student president of Alpha Kappa Alpha, says that some issues still have to be confronted today.
“I wholeheartedly believe that there are still a variety of prejudices that are held today,” says Mitchell. “Yet people of course cannot be “public” with their discrimination. Many prejudices that I see today are more systemic and mentally captivating. I believe they are still held today because believe it or not old ways die hard.”
Alpha Kappa Alpha is the first sorority for African-American college students.  The first chapter was founded in 1908, and the Washburn chapter of the sorority was refounded just last year.
“Eyes on the Prize: America’s Civil Rights Years, 1954-1965” was written as a companion to the acclaimed PBS television series of the same name.  The series and book have been reviewed with high marks, with PBS rebroadcasting parts of the series twice in the past eight years.  One of the episodes was nominated for the Academy Award for Best Documentary Feature in 1988.
Jordan Loomis is a senior double mass media and art major.  She has been a First Year Experience peer educator for two and a half years, and has seen the benefits of the iRead program.
“Literature, especially when assigned by a professor in a classroom, can be difficult to connect with,”  said Loomis. “The iRead program provides students with the opportunity to enjoy literature on a new level and even take it a step further by giving them the chance to speak with the author on a new level and even one-on-one.” The iRead program comes alive in the First Year Experience classrooms.  Loomis explained the formatting of the discussions and readings. “The FYE Program is designed the same way for all students but for each class, the teaching methods are tailored to teach specific teacher’s unique way of delivering their material. I believe that if the students showed interest in the issues experienced in the book, that their teacher may discuss it, but there is also the chance it may not be discussed,” said Loomis.
According to Loomis the course is designed under one format with several topics that need to be discussed throughout the semester. It is up to the specific teacher for each unit what is discussed in the course.
Loomis encourages Washburn students to read the book and attend the lecture, even if they are not in the FYE program.
“I’ve  attended (every iRead lecture) but a few years back I attended one in particular and ended up staying an hour past it’s end time after being swept into a discussion with the author, who started writing in Kansas, and ended up working for the New York Times,” said Loomis. “Now, I’m still in contact with said author and have learned extremely valuable information regarding my field of study over the years.”
Washburn University, originally named Lincoln College, is historically known for its inclusion of women and African Americans in their education programs.
“Eyes on the Prize: America’s Civil Rights Years, 1954-1965” can be purchased from the Ichabod Shop in the bottom level of Memorial Union.
Delete Image
Align Left
Align Center
Align Right
Align Left
Align Center
Delete Heading