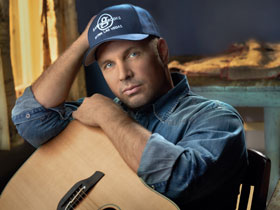 He’s back! Garth Brooks made his long awaited announcement today at a live streamed press conference in Nashville, Tenn. regarding his plans for a music comeback. The popular country singer from the ’90s who took time off to raise his three daughters, has now signed on with Sony Music and is promising his fans that he will finally provide digital ‘Garth’ music.

Although Brooks, 52, admits he is much older than when he performed in the past, he does not feel that his music will be any less powerful. In fact he hopes this tour will be so great that his fans forget about the ’90s.

His comeback tour, rumored to be as eventful as the Elvis comeback special in the ’60s, has not been without controversy. Brooks said controversy seemed to follow him in the ’90s but he was always able to sort it out. But this time feels ‘clueless’ about his latest controversy with Ireland.

“Today we should be all laughing and joyous,” Brooks said at the press conference. “And this (dark) cloud is sitting here.”

Brooks loves the Irish people and said if he could choose one place to tell the world ‘something special is coming’ Ireland would be the pick. But what he refers to as Ireland’s system will not give the simple ‘yes.’

“If the prime minister himself wants to talk to me,” said Brooks. “I will, crawl, swim or fly over there, I will sit in front of him, I will drop on my knees and beg him to let me play.”

Brooks said Ireland’s system needs to look at itself to fix the flaws preventing him from playing performances to 400,000 fans who have already bought tickets. Originally Brooks was to hold five concerts but due to Dublin regulations Brooks was informed he could only perform three. Brooks  decided days ago that he will perform all five or none at all.

“Anyone in Ireland, anyone on the planet who is sad about this…you are not one billionth as sad as I am,” said Brooks. “Cause I’m the real loser in this one. Because I’m the guy who is out the greatest experience of his life.”

Despite the dark cloud of the Ireland controversy, Brooks is still positive about his comeback to the music world and excited about all he has to offer his fans. He doesn’t believe in elevating tickets for people with more money and is still supportive of offering fans the same opportunities to access seats to his performances.

“We treat everyone equal,” said Brooks.

The new record will be a double album, because Brooks has so much to say after all these years. He’s not sure if his song writing is up to the level of the current songwriters in the business, but is looking forward to eventually writing good songs again.

Brooks admitted he shouldn’t say it but his new album holds a song that may even take the place of ‘The Dance’ to become his favorite Garth Brooks song ever.

“It pisses me off that I didn’t write it but what a beautiful song,” said Brooks.

Brooks said his job is to go out and play music and make it available to as many people as he can. Even though he calls himself ‘old school’ he is excited about finally going digital as it allows much easier access. He believes that all his fans who have waited so long for his music to go digital should be awarded.

“What’s coming, I’m going to tell you right now, people are going to mistake for giving it away but I’m not,” said Brooks. “There’s going to be a window coming with this digital era for anyone who’s waited for Garth Brooks to go digital, to get it all for a stupid price.”

Garth Brooks said he was the guy not considered ‘country’ back in the ’90s so it’s odd hearing people call his music ‘old country’ today. When asked what type of country he felt his new music categorized as, he referred to the two styles of “bro country’ and ‘hick hop’ stressing his fits neither. If he had to put it in a box he would just categorize it as “Garth music.”

Garth digital music will only be available at www.garthbrooks.com sometime in the next few weeks. Actual albums are expected to be sold by various retailers by Black Friday.