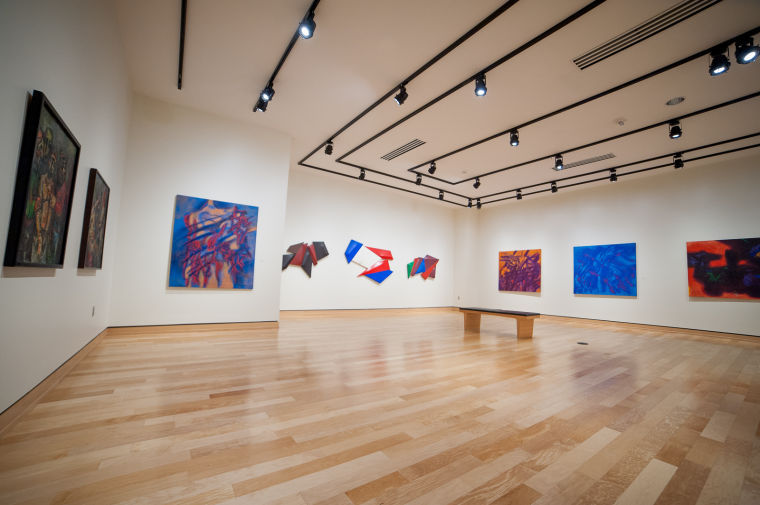 The work of Ed Navone is being shown throughout the month of July in the Mulvane Art Museum.

The Mulvane Museum is exhibiting the artwork of Ed Navone from July 8 through Aug. 9. Navone was a professor at Washburn from 1964 until 2007. The exhibit is a small sampling of his artwork, a preview of what will be on exhibit and for sale at the Leedy-Voulkos Art Center in Kansas City, Mo., Nov. 7 through Dec. 27, 2014. All profits earned from the show in Kansas City will go to support art students at Washburn University through scholarships.

“He was a dedicated teacher and an active artist, said Julie Myers, museum curator. “All throughout his life he took people on tours of Italy on many occasions.  He was very interested in encouraging involvement with the arts in Northeast Kansas. He did programs on public television KTWU.”

Navone, a native of Northern Californian, celebrates 50 years in Kansas this year. He attended San Jose State University, then continued studying more art and art history at the University of California at Berkeley.

The artworks on exhibit at the Mulvane museum illustrate three different working periods of Navone’s life.

The first period is religious artwork.  There are three different depictions of Christ, one as the ”Kiss of Judas,” one as “Christ before Pilate,” where he will be judged and another, “Doubting Thomas,” who sticks his finger into the wound of Christ to make sure of who he is.

“In his middle career there are no subjects,” said Myers of Navone’s acrylic on shaped canvas work. “But they are about movement and color and the kind of excitement you can get even though, obviously, works of art don’t move, they can create a sense of movement, a visual excitement particularly where the colors are dissonant, less harmonious.”

The displays of some of his later artwork is abstract, vivid and colorful, using sand, acrylic, modeling paste and oil on canvas.

“Navone was a great student of the Italian renaissance and still is,” said Myers.

During the renaissance period, painters incorporated what is called classicism, which is comprised of simplicity, balance and clarity. There was a wish among renaissance artists to bring back the art of classical Europe, especially pertaining to Christian painting.  Classical painting was less pretentious than paintings before the renaissance and artists wanted to convey balance and harmony.

In his later period, Navone shows the high influence French painter Georges Roualt had on him.  Roualt was one of the initiators of Fauvism. Henri Matisse is one of its most famous followers. It was a movement in French painting from 1898 to 1906. Fauvism was distinguished by a riot of colors. Though the colors are a vibrant representation of an artist’s vision, sometimes even discordant in color choices, they are meant to instill a peaceful feeling of well-being to the observer.

“We are so grateful for Ed’s generosity,” said Glenda Taylor, chairperson of WU art department. “I can think of no greater gift an instructor can make than to continue the cycle of inspiration, instruction and artistic expression through scholarships for new generations of students.”

Navone will have various pieces displayed at the Leedy-Voulkos art center, located on 2012 Baltimore Ave. in Kansas City. His subjects range from Civil Rights to a series of drawing on Dante’s inferno, which garnered Navone an art fellowship from the Mid-America Arts Alliance/National Endowment of the Arts.

The Mulvane Art Museum is located on 17th and Jewel on the Washburn University campus. The hours of the museum are Tuesday, 10 a.m. to 7 p.m., Wednesday through Friday 10 a.m. to 5 p.m. and Saturday 1 to 4 p.m.