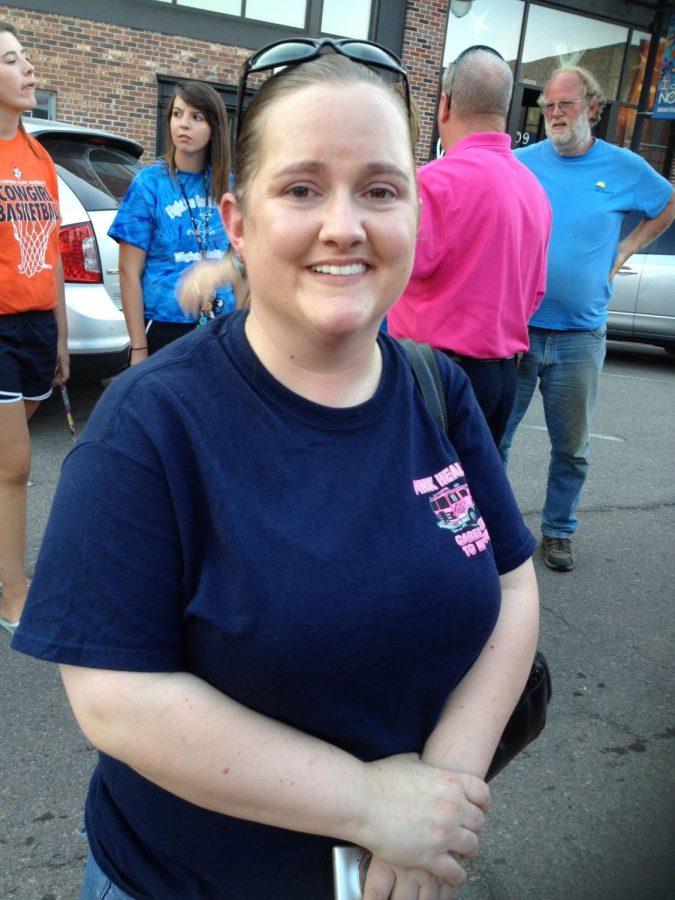 Topekan Becky Thompson visits with Pink Heals. A cancer survivor, Thompson recognizes the importance of community-based aid, such as that provided by Pink Heals.

The Pink Heals Tour drove their trademark pink fire engines into the NOTO arts district earlier this month to spread their message of altruism across the Topeka community.

The trucks stopped in Topeka while touring the country to support non-profit volunteerism and donating that is done by the community, for the community. Pink Heals is a true non-profit organization that is  funded entirely by merchandise sales and operated by volunteers who work to bring their mission to cities like Topeka.

Dan Hayworth, who serves on the board of directors of the Pink Heals Wichita chapter, said that before anyone donates to a charity they need to track where the money goes.

“If the CEO of a cause makes more than the fire chief in town or the local police chief then something is wrong and your time and money is not getting to your charity the way it should,” said Hayworth. “If a charity says some of their money is going to ‘research,’ you can’t track that money. Things need to change. We are 100 percent legitimate and it is sickening how much money is made off of sick people.”

The Pink Heals movement started in 2007 to help women battling cancer. Now they have expanded to helping women battling any disease or medical condition.

Pink Heals visits different cities to spread awareness about their cause. The organization stresses that they have no corporate salaries or large retirement funds appropriating money that should be directed toward the people who need it.

“We target people, not the disease,” said Hayworth. “We take care of women. Why is the Statue of Liberty a woman? Why do we call our country the motherland? She has always taken care of us and now it is time we helped her.”

The goal of Pink Heals is to bring the program to as many towns as possible and their message is that a community can come together to help those in need.

“If everyone took care of the people of their communities like they used to not so long ago, we wouldn’t have these problems like we do now,” said Hayworth.  “It used to be that when someone’s house burned down, the whole community got together and built them a new one. With Pink Heals, the help would go directly to help the people, like the woman who is too sick to work or the one who can’t afford her medication. It could even create jobs locally to run the chapter.”

Becky Thompson of Topeka came out to see the men in pink. She is a 22-year survivor of childhood cancer of the optic nerve.

Seth Kellick, a firefighter and volunteer for Pink Heals, wears a pink fire hat signed by children who had cancer and passed away.

“I know all their stories by heart,” said Kellick. “I am inspired by them and those we meet every day.  We make home stops to someone who is battling a disease. It is emotionally uplifting for them and we are letting them know that they are not alone.”

In NOTO, Kellick was joined by firefighters from Texas, Oklahoma, Florida, North Carolina, Arkansas and Wichita. Those involved came out on their own time and consider Pink Heals a labor of love.

“We put our volunteerism to work for the people in our communities rather than for a cause,” said Kellick. “It is health care support at a grass roots level and community leaders across the country are putting the program in place with the support of the people they elected.”

For Pink Heals merchandise, or information on how to start or contribute to a local chapter, is available at www.pinkhealstour.org.

Pink Heals can also be followed on Facebook at: www.facebook.com/pinkhealstour.