Bods gamble for Welcome Week to kick off fall 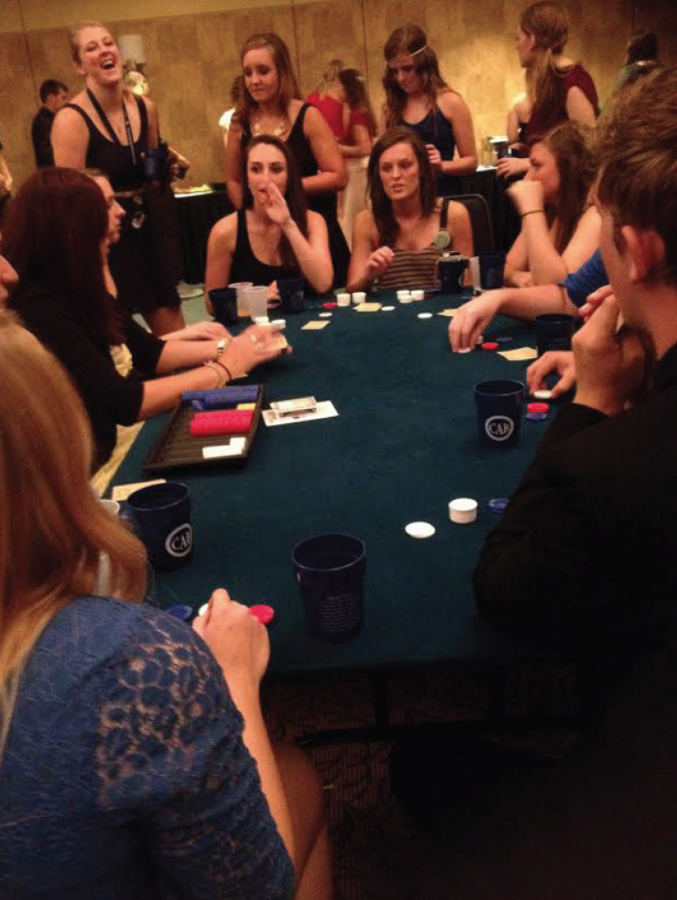 Casino Night brought out many students dressed to the nine’s or wearing their duds Aug. 16, in the Washburn Room held from 7-10 p.m. The casino was packed with students crowding around the Blackjack, Poker and Roulette tables and a long line was waiting to play Plinko. The event was free to all students and their guests, who were each given a complimentary cup with a playing chip worth $5,000 that could be cashed in for smaller denominations at the tables. Game dealers ranged from faculty, to students and student organizations like Greek Life, and the Campus Activity Board.

Organized by Margeaux Seymour, a senior Psychology major with the Campus Activity Board, the night was a hit from the very beginning. “Several small prizes will be given out by local businesses,” said Seymour. “But we also have a Television, a Keurig, Beats headphones and a mini iPad to give away”

Some of the smaller prizes given away from local merchants included grocery gift bags with gift cards to Walmart, a laundry basket filled with goodies for doing laundry, a movie package with a pizza gift card and popcorn and school supplies packages.

“We hit the food, it was really good. We’re here to learn,” said Bolt. “So far it’s kind of intimidating.”

There was also a variety of food along with “Mocktail’s” for drinks, in place of such drinks as Tequila Sunrises and Margarita’s.

“I’m happy to be here. I have an older sister and a cousin who are a senior and a junior,” said Winterburg. “I heard a lot of great things about Washburn from my family. Also Chris Kelts, the music orchestra director had a big influence on me.”

“[Casino Night] It’s pretty fun. I won some money over at the craps table and then lost some,” said Koon. “Then I won $3,000 back at the poker table. I’m just bouncing around to different games.”

The casino gaming tables were jam-packed with students playing and having fun. Prizes were given out during the evening. It was the biggest social event held yet to introduce students to Washburn.