Washburn stormed by Pittsburg State, working to bounce back 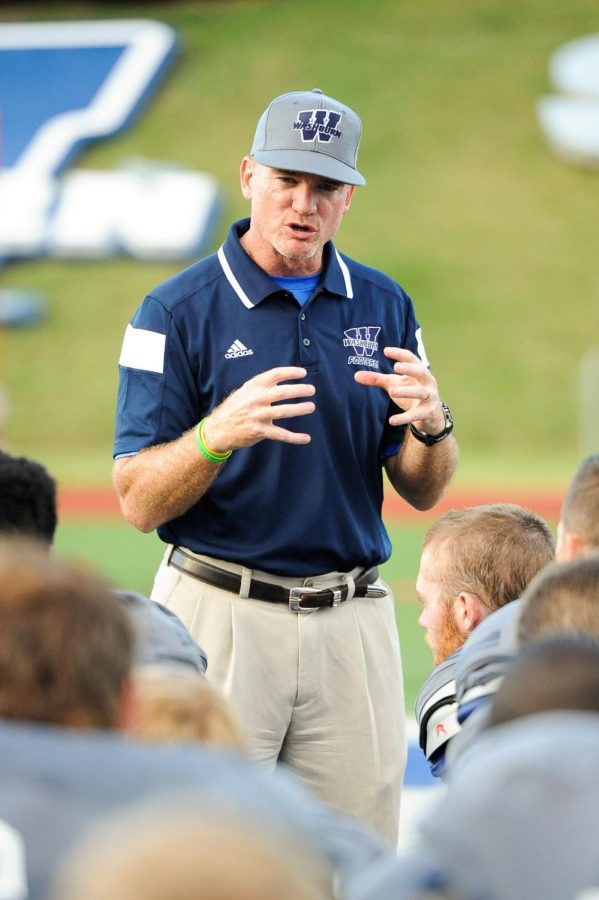 ENCOURAGEMENT: Washburn football head coach Craig Schurig speaks to hisplayers after a large loss to Pittsburg State. Schurig and his team have learned from thegame and are moving on and preparing to take on Missouri Southern Saturday, Sept. 27.

The Ichabods (1-2) on Saturday were almost stormed out and for the first time since 1998, they were shut out.

The Pittsburg State University Gorillas (3-0) dominated Washburn from the beginning, and despite a 75 minute storm delay, finished the game with a 42-0 victory. Washburn had previously never been shut out under head coach Craig Schurig.

But the Ichabods are looking forward now.

Running back and team captain Vershon Moore had some inspiring words regarding the team’s mentality.

“What we (the captains) saw on game day, especially when we started getting down, was a lot of guys tend to get their heads down, or getting down on themselves. Basically what we told them is, you’ve got to find a reason to be out here first of all. If you don’t know that reason why you’re out here playing football, then you got to do something else.”

Washburn plays at Missouri Southern Saturday, Sept. 27. Washburn has not played them since 2011. Schurig said Missouri Southern runs a completely different offense than Pittsburg State. Pittsburg State on Saturday did most of its damage through the air, whereas Missouri State racked up over 300 yards on the ground this past weekend. This shift in defensive schemes is something that Schurig believes will help the team focus.

Schurig also said that the crowd and student section has been very good this year.

“We’ve had a great atmosphere here the first two games,” said Schurig. “We hope they keep coming back because we know we can play a lot better.”