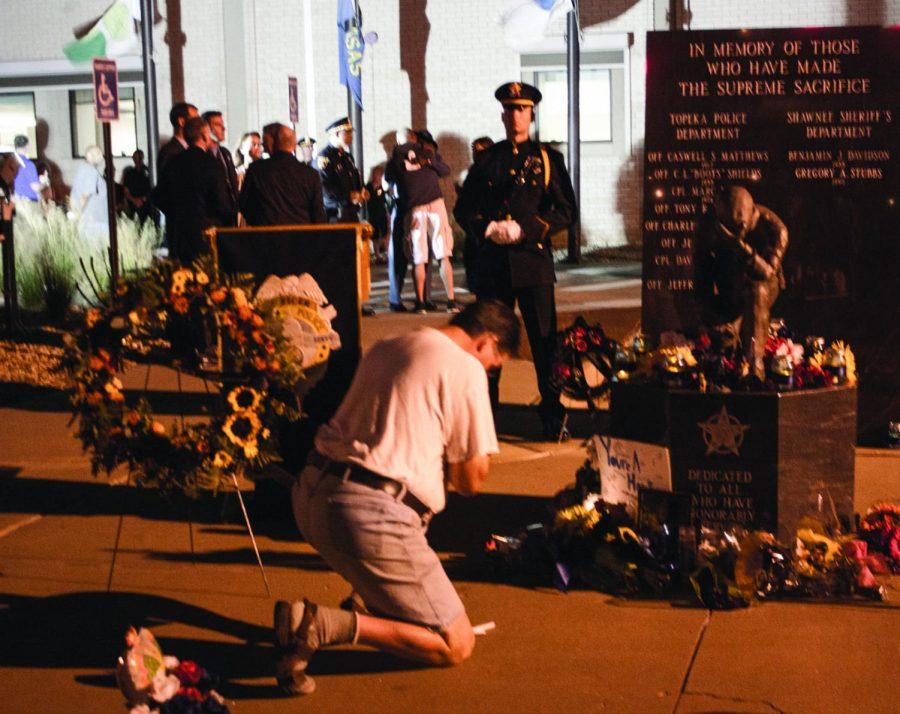 Honoring a Fallen Hero: Pierre Sutphin, Topeka, kneeled in front of the Fallen Officer’s Memorial Monday night during the candlelight vigil for Cpl. Jason Harwood. Local leaders and law enforcement officials urged Topekans to remain united and strong in the wake of this weekend’s tragedy.

Flags hung at half-staff in front of the Law Enforcement Center as a crowd gathered for a candlelight vigil in honor of Cpl. Jason Harwood, the 15-year veteran of the Topeka police force who was shot and killed during a traffic stop on Sunday evening.

“Try as we might to understand what has happened, and happened again, we cannot comprehend it,” said police chaplain Tobias Schlingensiepen, who opened the ceremony.

The crowd stood in somber silence while community leaders and law enforcement officials flanked the Fallen Officers’ Memorial for the second time in less than two years. As Steve Evans, president of the Fraternal Order of Police, approached the podium, the sound of sirens wailed in the distance; a reminder that duty calls even in the wake of tragedy.

“Tonight we gather to remind each other about one important thing,” said Colson. “That we care.”

While the ceremony went on, the flicker candlelight grew brighter as, what started as a single flame, grew into a glowing display of unity.

Following the pleas for camaraderie, respect and justice from the speakers, Cpl. Jayme Green honored his colleague by singing “Amazing Grace,” which inspired many in attendance to join in.

Once the ceremony concluded, officials welcomed the crowd to visit the memorial and pay their respects to the fallen officer.

“It’s very, very tough,” said city councilwoman Karen Hiller, who was also in attendance. “It’s only been 20 months since we buried two others and it’s something that’s never supposed to happen. It’s terrible for everybody involved, yet once again, this community has come together to support law enforcement and Cpl. Harwood’s family and friends. It’s a testament to how much this community will come together and support one another.”

Cpl. Harwood, who joined the force in 1999, was killed Sunday, Sept. 7 during a routine traffic stop in East Topeka.

Harwood is survived by his wife, Laurie and two sons, Lawson and Tyler.

A public memorial will be held from 3-6 p.m. on Friday, Sept. 12 in Exhibition Hall at the Kansas Expocentre. Services will be held in the same location at 11 a.m. on Saturday, Sept. 13.

Donations to the Jason Harwood Memorial Fund can be made at all area Core First Bank and Trust locations and at the Topeka Police Credit Union, 320 S Kansas Ave., have set up a memorial fund for those who wish to contribute.