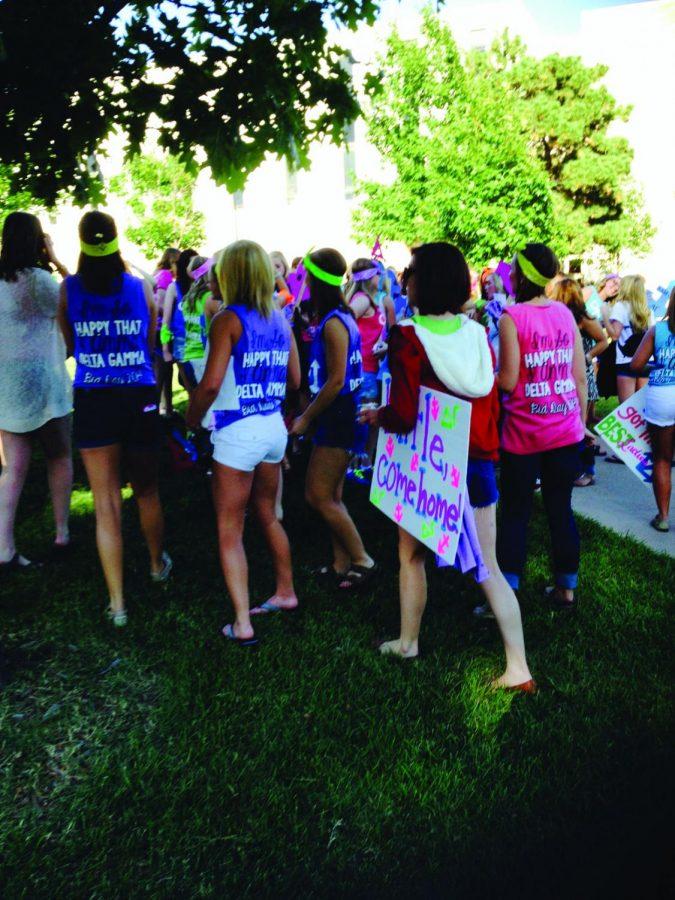 The Pan-Hellenic formal recruitment of Washburn University sororities ended in a run down the hill beside Henderson Hall to a lot of shouting and as new recruits met their new sorority sisters on Sunday September 7.

The formal recruitment was a three day process begun on Friday, September 5. During the activities, the new prospects got the opportunity to meet members from each of the three sororities and had the chance to learn about the sisterhoods of each house. The prospective pledges were led on a guided tour of each of the three campus houses.

On Saturday, each chapter discussed and explained to the candidates their philanthropic causes and what they involve.

Each sorority was out to recruit the best women possible, with qualities they wished to see in themselves and in the other women of their sorority. They would be encouraging the new recruits in the coming months and years, supporting each one in scholarly achievement, in their own deeper self-awareness and attitude, and in philanthropic participation if chosen for their house.

Sunday was bid day, when each candidate received a bid card from a sorority which had voted for them. It was to mark a day of festivities that would mean a new episode in the lives of each woman as they would meet the other women they would become close to and share experiences with for the rest of their lives

“Today is a good day,” said Rachel Prior, a senior radiology technician major and new member coordinator. “We just got 40 new members and almost doubled the size of our chapter. Today is just a big party—hanging out all day and eating. This day is to celebrate all the new members.”

The Fraternity men were also out to show their support. “Kappa Sigma sends congrats to all 98 of the new women,” said Danny Hotujac, a sophomore sports psychology major. “We wish them good luck in their Greek life endeavors.”

Kalvin Murphy, a sophomore criminal justice major of Kappa Sigma was cheering when he said “On behalf of the Kappa Sigma Fraternity we’d like to send our deepest thanks to the lovely ladies that have accepted their bids to their sororities. “It’s Greek life and we like to show our encouragement and that we care. We are looking forward to meeting our new members.”