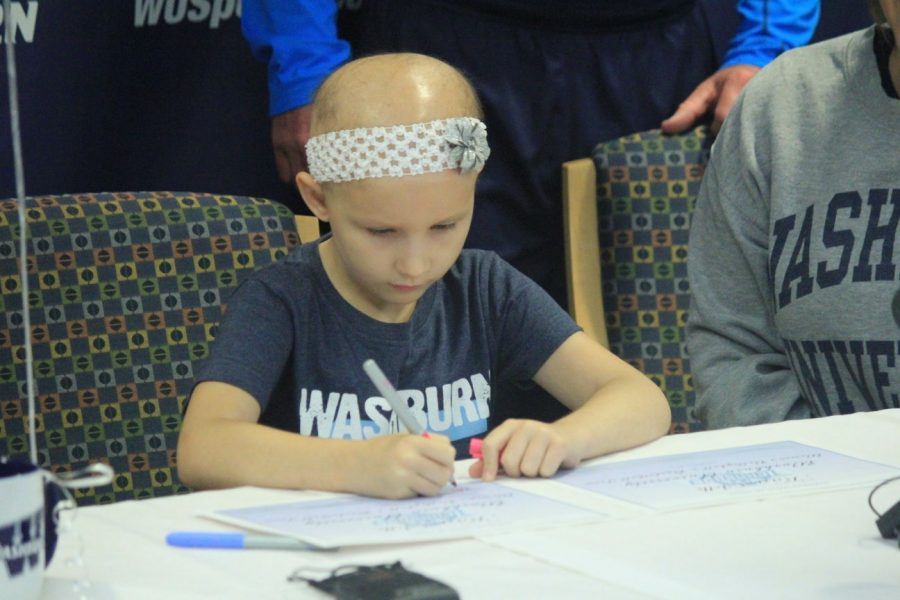 7 year-old Karis Selk signs letters of intent to play at Washburn University. Karis was diagnosed with brain cancer in 2012 but is now in remission. She has been adopted by the volleyball and women's basketball team as an honorary member.

A ceremony was held Thursday, Oct. 2 at Washburn in which the volleyball team and the women’s basketball team adopted Karis as an honorary member of both teams, allowing her to have her own locker, participate in game warm-ups and sit on the bench during the games.

After opening words, Karis’ mother Stephanie Selk spoke to a packed room about the beginning of Karis’ journey.

“(Karis) is seven years old now, but she was five years old when she was first diagnosed with brain cancer during November 2012,” said Stephanie Selk. “An MRI showed that she had three tumors in her brain and metastasis to her spine. On November 16 she had her first brain surgery…and started chemo.”

Stephanie Selk went on to tell how much more chemotherapy and radiation Karis had to endure. But then she delivered the good news.

“Then, October 2013, she was declared in remission, and we’re almost a year out.”

Karis is still being monitored, but the doctors are confident the cancer will not come back.

Following this speech, Karis signed two letters of intent: one for Washburn volleyball and the other for women’s basketball.

After Karis signed her name, as her parents, siblings, Washburn volleyball coach Chris Herron and women’s basketball coach Ron McHenry watched, the two coaches also signed the letters. This was followed by a loud round of applause.

This was, of course, a very emotional event, especially for Karis’ parents.

“This means a lot,” Kyle Selk, Karis’ father, said fighting back tears. “More for her. She’s been through a lot. Getting out and seeing all these kids – look how –” he said, motioning to Karis laughing with the players.

“We’ve done things with community in years past,” said Herron. “We’ve done some reading programs. We’ve done some what we call ‘lunch buddy’ programs, but this is our first time obviously being involved in something like this.”

Karis and the Washburn teams came together through a program called The Friends of Jaclyn Foundation. The foundation was formed in in 2005 in honor of Jaclyn Murphy, who was diagnosed with a brain tumor in 2004. The foundation’s goal is to improve the quality of life, in one way or another, for children with pediatric brain tumors and their families.

Karis, who is the cousin of Washburn volleyball freshman Taylor Selk, has already experienced Washburn athletics. She summed up her thoughts on Washburn in two words.