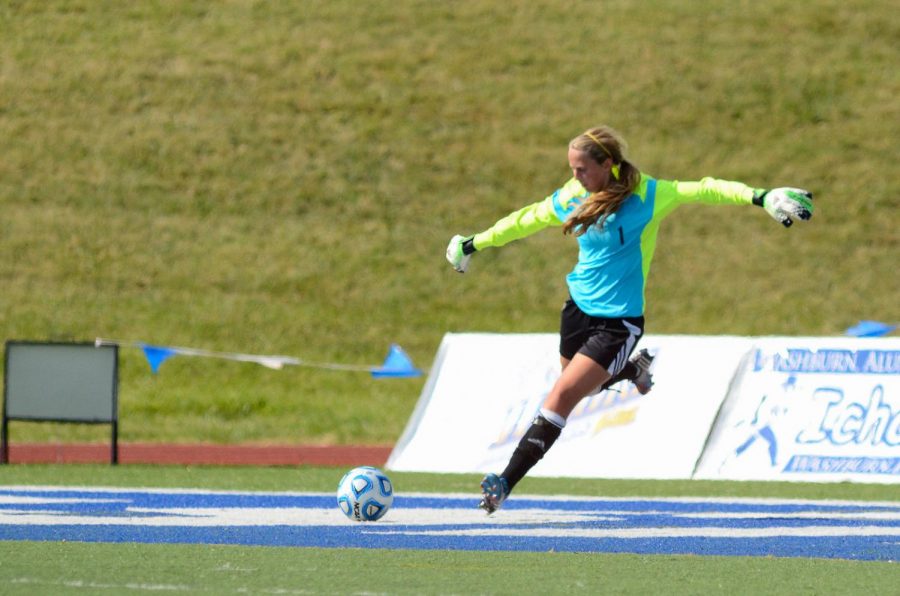 Tori Fuglister delivers the ball back into play against the Jennies. Fuglister had seven saves, but the Ichabods could not outscore Central Missouri.

The Washburn soccer team came out of the fall break weekend with two losses, one of which was a close call to the Lindenwood Lions Friday, Sept. 26 with score of 1-0.

Both the Lions and the Ichabods were playing physically throughout the whole game with 31 total fouls, 17 of which were against Washburn. One of the Lindenwood players, Kirsten Crabtree, even received a yellow card with only three minutes until the end of the game, when the game was most intense.

The fans observed a desperate battle for a goal for almost 85 minutes until Washburn goalkeeper Tori Fuglister let by a crucial penalty kick from Lindenwood midfielder Danielle Torry that went into the corner of the net. Lindenwood was set up for this opportunity after the Lions’ forward Becky Roberts was taken down in the penalty box.

The Ichabods seemed to struggle in terms of controlling the ball and attempting to look for strategies to score. Seemingly, these factors played a role in determining Washburn’s defeat.

“I definitely think that we could play better in the first half, but we came back to the second half playing really hard,” said midfielder Valerie Harms.

The other fall of the Ichabod soccer team was a less suspenseful one, dropping to the 17th ranked University of Central Missouri Jennies on Sunday, Sept. 28.

The match began at 2 p.m. under the heat of the sun and ended two hours later with a 5-1 score in favor of the Ichabods’ opponent. The outcome of the game was already somewhat predictable when Central Missouri’s Alex Yockey scored two goals within six minutes of the beginning of the game. Later, she also assisted a goal in the 23rd minute. Two out of three of Yockey’s goals were assisted by the Jennies’ Hannah Pyle.

By that point in the match Washburn only had one goal, scored by Emily Staufer in the 11th minute with the assistance of forward Whitney Skinner and midfielder Cadence Bourne.

In addition, the Ichabods were outshot by the Jennies 18-5, but this factor led to Fuglister having seven saves in the net.

“We are not happy about the outcome of these games, but we are so close,” said Bourne. “Just a couple more passes or extra hit on the shot will make a difference in the game.”

The Ichabods will be back to change the outcome of their performance Friday, Oct. 3, playing at the University of Central Oklahoma.