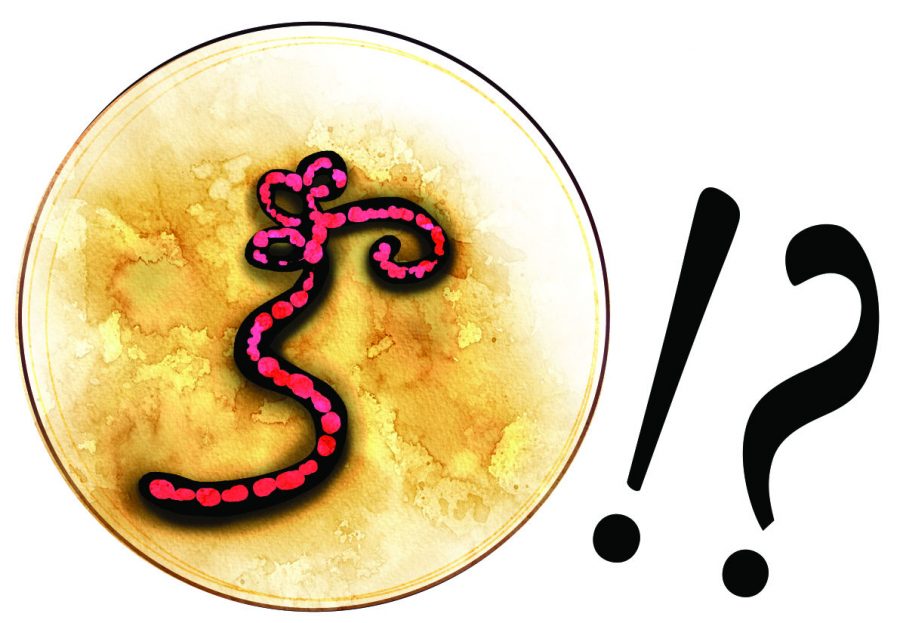 Ebola. The fact that this disease even exists causes nightmares for some, but looking at the facts, fic­tions and truth can bring a bit of relief to those who are losing sleep over the epidemic that seems to loom overhead.

The virus may be highly infec­tious, as a person who comes in direct contact with infected fluids will most likely become infected themselves, but at the same time it’s not very contagious, or easy to transmit from one person to an­other. Learning about the disease will not only help quell fear, but it also may almost completely elimi­nate the possibility of it spreading within the boundaries of the United States.

According to the World Health Organization, “People can be ex­posed to Ebola virus from direct physical contact with body flu­ids like blood, saliva, stool, urine, sweat etc. of an infected person and soiled linen used by a patient. It can be spread through contact with objects, such as needles, that have been contaminated with infected secretions.”

Infection can spread through any touch, as sweat comes in con­tact with skin, even if the person doesn’t don’t realize they have small cuts for the fluids to flow into, so any touch is taken seriously even though this mode of transmis­sion is highly unlikely.

The method of transmission is very strict. It takes direct contact with bodily fluids, of any kind, to spread and transmit the virus.

The CDC gives further details about the mode of transmission, “Unlike respiratory illnesses like measles or chickenpox, which can be transmitted by virus particles that remain suspended in the air after an infected person coughs or sneezes, Ebola is transmitted by direct contact with body fluids of a person who has symptoms of Ebola disease. Although cough­ing and sneezing are not common symptoms of Ebola, if a symptom­atic patient with Ebola coughs or sneezes on someone, and saliva or mucus come into contact with that person’s eyes, nose or mouth, these fluids may transmit the disease.”

This means only direct contact with the fluids would result in in­fection, not a secondary cloud that lingers after the cough or sneeze has occurred. The CDC also adds a warning, “The Ebola virus has been found in semen for up to 3 months. People who recover from Ebola are advised to abstain from sex or use condoms for three months.”

Once a person understands the mode of transmission they can protect themselves simply by not touching the fluids someone who may be sick or infected. The virus also can’t just move from person to person unless they are sick and begin to display symptoms. This means that people will most likely be visibly sick and not just walk­ing around spreading their fluids in public and that screenings for symptoms are effective.

Other entities, such as our local hospital aren’t worried about the virus spreading in the United States but are still taking the possibility very seriously.

Nancy Burkhardt, spokesper­son for Stormont Veil Healthcare stated “Stormont Veil believes that the chance of seeing an Ebola pa­tient in Topeka is pretty low. We’re still taking it very seriously and preparing as if it was high. We’ve implemented in our emergency de­partment a travel question to ask if they’ve traveled to a place that’s been infected. We’ve also put up fliers in the lobby asking patients to let us know if they’ve been to ar­eas that have been infected in the last 21 days. We want to engage patients and visitors and have them share in the responsibility in com­municating if they’ve been to an area in which the Ebola virus has been detected.”

Common sense goes a long way in controlling this virus. Wash your hands, don’t touch the fluids of someone who may have come into contact with the virus and don’t panic. Communication is key and the faster an infected person can seek treatment the more likely they will survive.

The United States has proper sanitation, we bury our dead quick­ly and we are able to inform mass amounts of people on how to take care of themselves so they don’t contract the virus. All these facts and more make it highly unlikely that any outbreak would occur in this country.