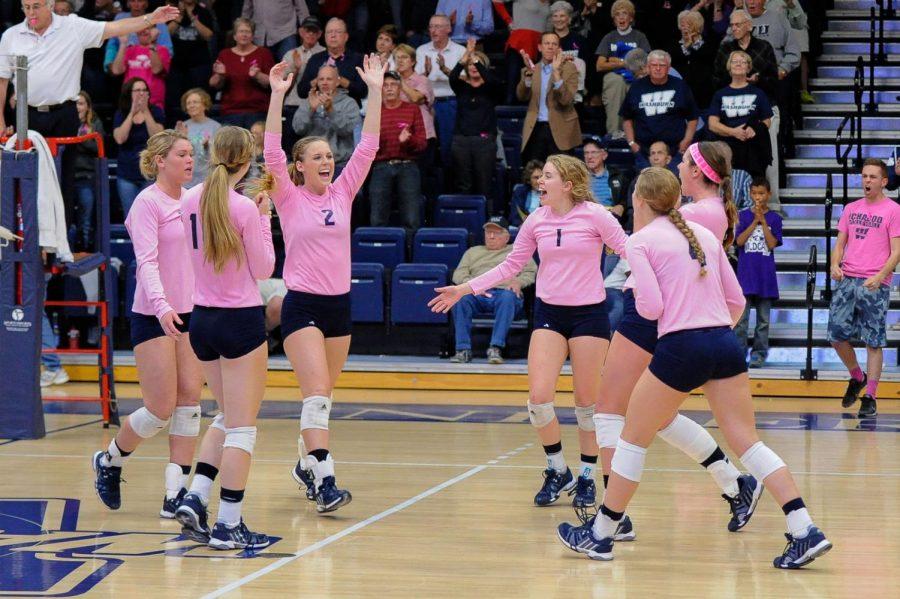 The team celebrates after scoring the final point of the game. A 3-1 win over Missouri Northwest makes Washburns' record 18-2.

The first set began with a competitive, back and forth match up. The score was even until the Bods went on a streak sparked by senior Marissa Cox’s seven kills. Washburn pulled away at the end resulting in a 25-17 victory.

The second set was a less impressive one for the home team. The Bods had a slow start and did not have a lead the entire set. After trying to play catch up, Washburn fell short, losing the second set 23-25.

In the third set, Washburn picked up the pace and held at least a four point lead during most of the set. Led by sophomore Sarah Vicory’s six kills, the Bods won the third set in a dominating fashion by a score of 25-13.

Washburn and Northwest Missouri State were neck and neck to start the fourth set. The Bods gained a steady lead and finished strong, beating the Bearcats in the fourth set 25-18. The then-fifth ranked Ichabods won the match 3-1, improving their record to 18-2 on the season.

On Saturday, Oct. 18, the Washburn volleyball team played Missouri Western State University in a highly competitive Homecoming match up. Missouri Western was one of only two teams to beat the Ichabods this year.

All five sets were back and forth battles between the two teams. The Ichabods won the first set 25-20 and took the second set by a score of 26-24. Going into the locker room, the Bods had a comfortable lead of 2-0. However, the next three sets were a different story.

The third set went to the Griffons 26-24. Missouri Western also won the fourth set 25-18 and forced the match to go into a fifth set. The fifth set was one for the Washburn history books because the 46 point set was the highest scoring fifth set in school history. Unfortunately, after several ties and lead changes, Missouri Western won the fifth set 24-22 and won the match 3-2. The Missouri Western Griffons improved to 17-4 and 11-2 in the MIAA on the season. The Griffons are now tied for first place in the MIAA. Washburn has a record of 18-3 overall and 10-3 in the MIAA this season. The Ichabods dropped out of first place in the conference after the loss.

Next Friday, on Oct. 24, the Ichabods will look to get back on track as they travel to Lindenwood University to take on the Lions.