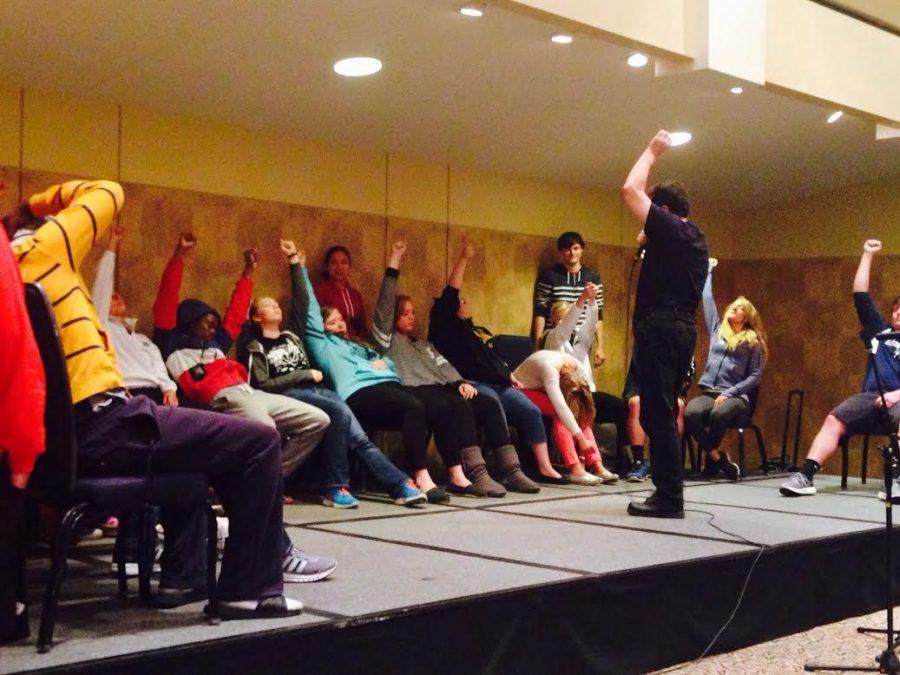 Taking many anxious volunteers from the student audience, Tom Deluca went right into his impressive act of hypnosis. Once all the volunteers were positioned in their seats on stage, Deluca began what seemed like his secondary language.

Talking in a soothing voice, with the compliments of soft music, Deluca talked to all the volunteer students until they quickly fell into a trance, or deep sleep.

Although not every volunteer continued to be in the trance throughout the whole show, many continuously obeyed Deluca’s every command and never went out of the trance. Spotters were aligned around the stage to catch or help any students that become wobbly from the trance.

What first began as simple commands grew into more complicated tasks that showed off each individual volunteer. Some memorable moments included asking some volunteers to dance, pose in a pretend body building competition, and asking one student to act like a top-secret spy.

“I was really impressed,” said Sarah Watts, junior, social work major. “It was really cool how [the volunteers] looked like they were under a spell.”

One volunteer did CPR on two apples, another spoke in a pretend alien language, and another sang out every answer to any question Deluca asked. The entertainment was exciting for all those who were watching and seeing their fellow friends and students not be in control of their own bodies.

The audience continued to soak up every ounce of entertainment from the stage and laughter was prevalent throughout the entirety of the show.

“[The show] was really great,” said Braxton Bolden, junior, nursing major. “My favorite part was when [Deluca] made everyone dance and shake.”

Deluca ended his entertainment-filled show by explaining to the volunteers that they would feel refreshed, more focused, and less stressed after being hypnotized.