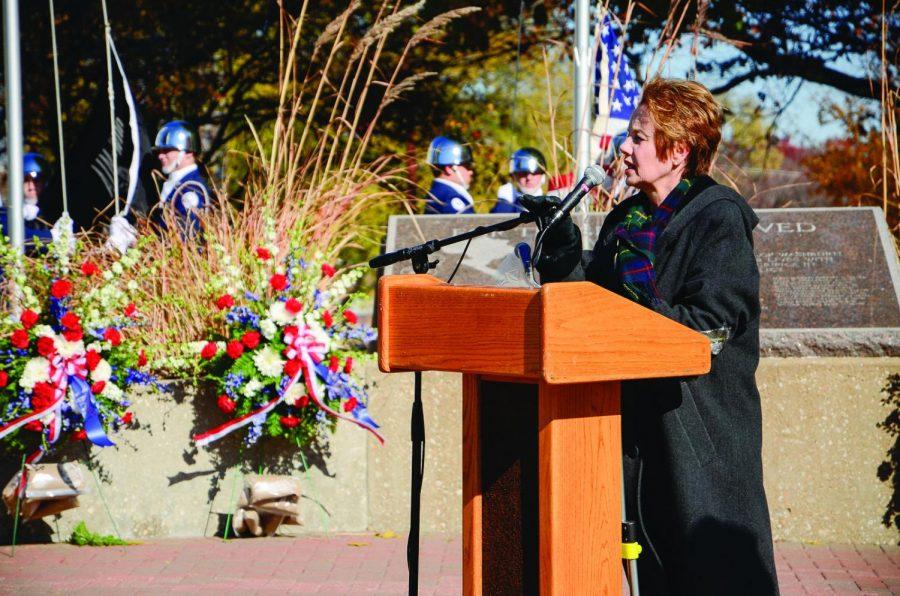 Washburn’s Director of Student Services Jeanne Kessler led the 27th annual Veteran’s Day Ceremony. The event saw veterans, their families and Washburn students come together to pay respect to those who have served in the armed forces. Washburn and area high school ROTC took part as well.

Despite frigid temperatures, a crowd of Washburn students, faculty and others from the Topeka community gathered near the Vietnam War Memorial at the southeast corner of Morgan Hall to pay tribute to the nation’s combat veterans.

“We share a common bond with those veterans who have braved the cold for centuries,” said Washburn’s Director of Student Services Jeanne Kessler.

Kessler, who helped organize the 27th annual Veteran’s Day Ceremony, emceed the event and also led the Veterans Tribute, which listed the names of service veterans submitted by family members.

“To those who shared [the names of veterans], thank you for the honor of remembering those who have served and are currently serving,” said Kessler. “These are just some names. Others remain unnamed, but their faces burn in our hearts. We thank them.”

Melissa Jarboe, executive director of the Military Veteran Project, served as the ceremony’s keynote speaker. Jarboe appeared in honor of her husband Jaime, who was left paralyzed after being hit by sniper fire and later died from his injuries, spoke to the crowd about the struggles she and her family faced after Jaime returned from combat.

“Life can change in a moment– as I found out,” said Jarboe as she began her speech. “Every day, we prayed that we were one day closer to leaving [the hospital] and living the life we had taken for granted.”

Jarboe ended with by quoting her husband’s response to a hospice nurse asking him, just a few days before he passed away, if he regretted enlisting.

“I have no regrets. I love the military. I love my country. I would take that bullet again.”

Prior to the ceremony’s start, the Standing Bear Intertribal Brotherhood performed a cleansing and blessing of the memorial site.

Topeka resident Teresa Thomas, led the memorial balloon release for Agent Orange victims. After speaking briefly on the grim realities of chemical warfare, Thomas and her grandson, Carson, released a trio of orange balloons into the air while the crowd gave a moment of silence.

Washburn University Army ROTC handed out orange carnations to the crowd during the balloon release. The carnations were used as an environmentally-friendly substitute for balloons. Attendees were invited to place the flowers in front of the memorial after the ceremony concluded.

Area high schools were invited to take part in the ceremony as well. The posting of colors was performed by Washburn Rural’s Air Force JROTC, while the school’s marching band played the National Anthem.

The flag flying above the ceremony once flew over Forward Operating Base in Mehtar Lam, Afghanistan and was brought to Washburn courtesy of SSG David C. Miller, Kansas Army National Guard.