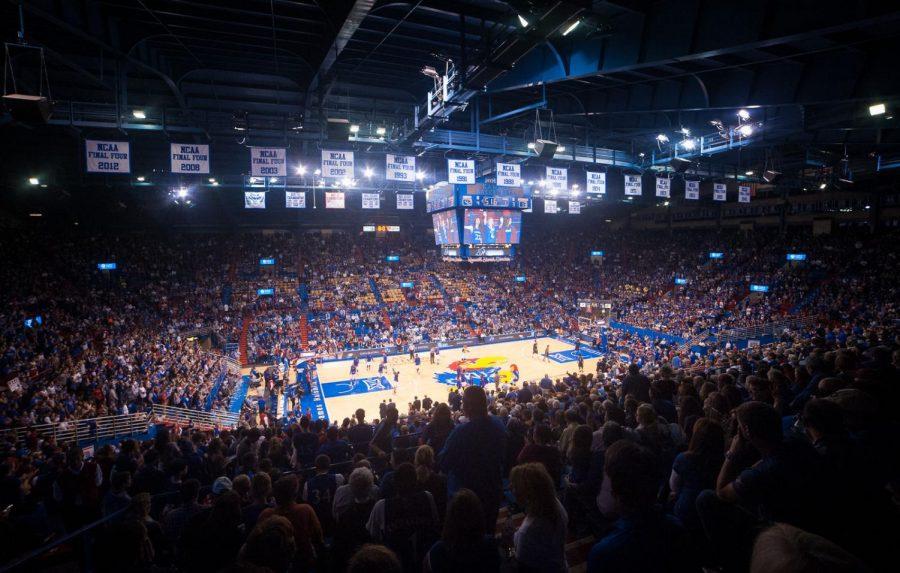 Allen Fieldhouse was full of energy for the Washburn vs Kansas University matchup.

On Monday Nov. 3 the Washburn Ichabod men’s basketball team got its first live action of the year as it traveled to Lawrence to take on the fifth ranked Kansas Jayhawks at Allen Fieldhouse. It was a sold- out crowd with an intimidating atmosphere from tip off through the entire game.

The first two points of the game for Washburn came after Kyle Wiggins hit a step back jump shot early in the first half. After forcing a turnover, KU took a 9-3 lead and rode that momentum for the rest of the night and never looked back.

The first half was dominated by the Jayhawks, who had 28 rebounds and shot 52 percent from the field as they took a 42-13 lead into the locker room at halftime.

 The first 20 minutes were rough for the Ichabods. They turned the ball over 10 times and only shot 17% from the field. Senior guard Korey Fisher led the Bods in scoring at the half with seven points.

 Washburn had a much more impressive second half. For the remaining 20 minutes of the game the Bods battled and hung with the nationally ranked KU team. Washburn improved its offense efficiency with a field goal percentage of 39 percent and 40 points in the second half. The final outcome ended favoring KU with a score of 85-53.

With 14 total points, Fisher was the leading scorer for the Ichabods. Junior guard Kevin House also made a couple outstanding offensive plays and finished with eight points. After an exhausting 30 minutes of playing time, senior Alex North fouled out with six points and seven rebounds.

Washburn basketball head coach Bob Chipman was interviewed after the game concluded. Chipman said he was very impressed with KU’s defensive and shooting abilities. He commented that KU took Washburn out of almost everything they wanted to do in the first half. He also further discussed that Washburn will take bits and pieces of this game as a positive outcome and described Fisher as a “scoring machine.”

The next two exhibition match ups for Washburn do not get much easier. The Ichabods will travel to Norman, Okla. and Manhattan, Kan. to take on the Oklahoma Sooners and the Kansas State Wildcats.