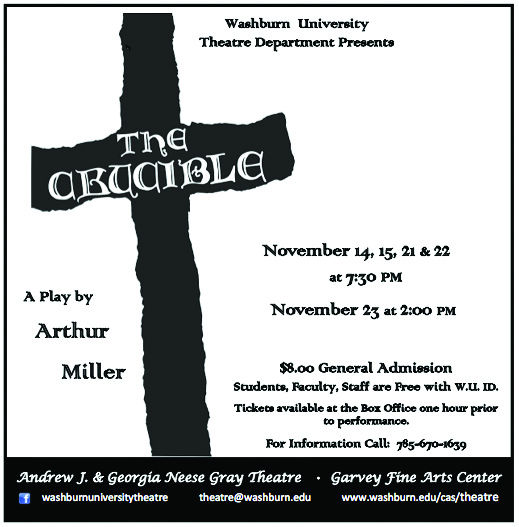 Director of the play, Paul Prece, comments on how the rehearsals have been going, “We have been working for about 7 weeks rehearsing and readying this production. The actors and crew, all Washburn students are working hard to deliver performances that will effectively relate the story of Salem in 1692.”

Miller’s play centers on the story of a man named John Proctor, and the town he lives in that has been deeply affected by the misguided Salem witchcraft trials, all which have been sparked by the accusations of a young woman. Matters become worse when the law steps in the attempt to bring order and justice to the town. No innocent person is protected from the accusations of witchcraft made by many.

According to Prece, “The play, a serious drama told in four acts, might be described as a parable. It is well known to be Miller’s allegorical response to the “witch hunt” trials of House Un-American Activities Committee of the McCarthy era in America, mid-20th Century.”

Audience members can look forward to a powerful, emotion-filled play that greatly portrays, as Prece says, “the many stories contained within the framework of Miller’s narrative.”

The play is free to Washburn students with a WU ID.