‘Trifles’ portrays a modern take on a 20s theme 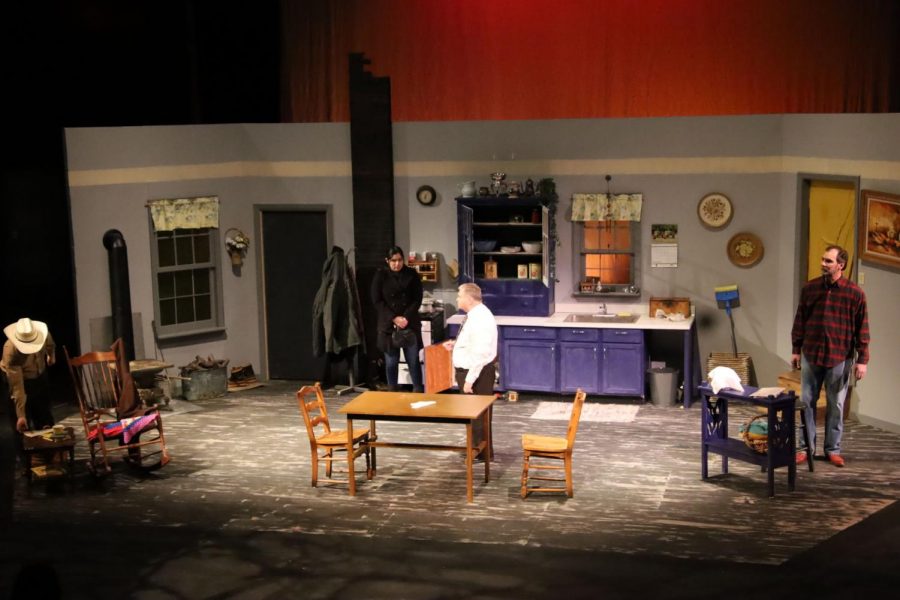 Mystery with a subtle message: Staats says that throughout the show a lot of hidden themes emerge. Where it’s a lot like real life, where what appears to be one way can be completely different.

Murder mysteries can shed light on a lot of serious topics, and “Trifles” is no exception.

Washburn theatre will be showing the play “Trifles” this weeks. In this more modern adaptation of Susan Gaspell’s early 1920s play, gender roles and the separation between men and women, especially within the household, are highlighted.

In this one act show, which is approximately 30 minutes long, a man is found dead, and his wife is in jail as a suspect. Meanwhile, a farmer and his wife are in the house where the murder took place with the sheriff and an attorney looking for evidence.

Emma Staats, senior integrated studies major, is directing this show for her capstone project. She has combined the majors of sociology, criminal justice and women’s and gender studies, to create a show that focuses on human rights issues.

“I wanted to pick a play that has an important message that wasn’t just a ‘yell in your face’ type of production,” said Staats. “There’s a lot of social justice pieces out there, but it’s hard to find one that really fits into a theatrical setting. So, I really wanted to find one with some subliminal messaging.”

Staats said she was angry when she first read the script, but that’s not the emotion she hopes the audience will leave experiencing. Instead, she wants them to examine how isolation can play an element in domestic violence, and how we see that even now in modern day. Staats feels like we still encounter it here in the midwest — where it’s someone else’s business and everyone is wary to get involved, even if it means they could help prevent abuse.

Angela Woods, junior theater and English major, is the stage manager for this performance. This is her fifth time in a row stage managing a production at Washburn. Woods’ favorite part about the show is small details where, if the audience doesn’t pay close attention, they could miss them.

“I know some people drown out in plays,” said Woods. “But this one, you really got to listen. It’s very, very detailed.”

As the stage manager, Woods also oversees many particulars the audience would never dream of, such as directing the stage if an actor messes up a line, tech (i.e. when the lights come on, off, or where they are placed) and sound.

“Basically, I just keep the stage running,” said Woods. “Make sure all the technical stuff works and all technical difficulties are taken care of.”

Woods admits that running a 30-minute show is different than running those that last for hours, especially if it comes to a lighting mess up since it’s all the little aspects of the show that count.

Woods mentioned that this is one of the best plays she has ever stage managed as well.

“It has a lot of female empowerment, and it really shows what it’s like to be a woman in a certain society,” said Woods.

Isabella Martinez-Haskins, senior theater major, plays the role of Mrs. Peters. Martinez-Haskins participates in two to three plays each semester. If she isn’t acting in them, then she’s stage managing. Martinez-Haskins said that she enjoys acting the most, but she got the opportunity to learn about what goes into directing.

“I was able to take a directing class last semester, and I found I really really enjoy directing,” said Martinez-Haskins.

Martinez-Haskins said her favorite part of this play is an intense moment between her character, Mrs. Peters, and a character named Mrs. Hale. In the scene, the two are making eye contact and almost yelling at each other which soon leads to Mrs. Hale’s character bursting into tears.

Martinez-Haskins ultimately wants the audience to focus on the message at the heart of the story they are telling.

“The show was originally written to be early 1900s, but we’ve tried to rewrite it. So, some of the things might sound a bit older, but the important thing to take away from it is the message,” said Martinez-Haskins. “These things still continue to happen even if its not in such a dramatic way.”

Staats also feels like the audience should leave thinking about the short but important message that the play tells.

“I just want people to walk away thinking about what they saw and thinking critically about how it applies to everyday life, and talking to people about it,” said Staats. “I think a show like this is a fantastic conversation starter.”

With that in mind, Staats said that though the show is geared toward any audience and is kid friendly, children may not get much out of it.

The theatre is partnering with the YWCA and Nonoso Women’s Honor Society. They will collect donations of socks and underwear (packaged is preferred) to assemble “Fresh Start” kits for survivors of domestic violence. The YWCA will be collecting donations all four days of the play.