The Book Owl: Love memoirs may not be for everyone 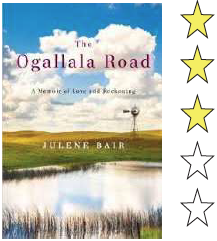 Admittedly, this was my irst time reading a proper memoir, and I’m happy to say that I’m not turned off by the genre. “The Ogallala Road” is a love story at its core: Bair’s love for her family and the environment, and intimate recounts of her past and present romances. That emotion bled into the words warmly with a sympathetic frankness that made it easy to assume her point of view.

There was nothing inherently wrong with this book. It was actually quite well written. However, I found myself uninterested for large portions of the story, mainly due to its frustratingly uneven storytelling and pacing. It could not quite decide whether it wanted to predominantly be about Bair’s romance, familial dynamics, or a commentary on modern agriculture and its effect on the environment (which is an issue that deserves much more attention than it gets). There were certain aspects of each of the three, which worked well, but the story’s scope was two decades too broad and left the narrative scattered.

The novel could have beneitted greatly from being grounded by a linear timeline and more streamlined as a whole into a singular main focus with rich side stories.

Its strongest components were easily the romance immediately introduced and the conversation opened up about ecological conscientiousness- Bair’s speech on the Ogallala Aquifer in particular. The rest, unfortunately, failed to hold my attention for substantial periods of time and fell lat for me. Ultimately, there is merit to having read this memoir, but it is a niche read, and not one I would readily recommend to everyone.