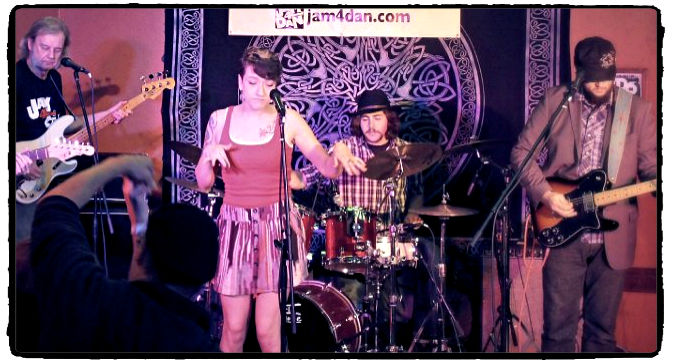 “Human trafficking (both labor and sex) exists all around Kansas, even in Topeka and Shawnee County,” said Ellie Smith, one of the people on the Jam for Justice committee, in an email interview.  “This is the first year that there are resources located right here in Topeka at the YWCA Center for Safety and Empowerment to assist victims of human trafficking.”

In effort to raise both funds and awareness about human trafficking, Smith has taken part in organizing Jam for Justice, a local event featuring local talent to bring awareness to a global issue as well as funds for victims of human trafficking.

The event will feature local musicians, such as Amygdala, a Live Music Institute Showcase, Nate Dingman, and Smith’s own Ellie Smith and the Commotion.  The event will also include a live auction of art donated by Matryoshka, Looking Glass Tattoo and Gallery, and students from Manchester School for Young Children, and a raffle at the end of the evening of art that will be created during the event.  There will also be a new edition of the Freedom Project CD, a CD comprised of music from the artists who will perform that speaks to the issue of human trafficking, available for purchase.  All proceeds from the event will go toward YWCA Center for Safety and Empowerment, which provides services for sex and labor trafficking victims.  Jam for Justice is January 10, 2015, from 3 p.m. to midnight at the Celtic Fox.  Attendees under 21 will need to leave by 10 p.m., which is one of the reasons why the event is starting in the afternoon.

“We like to include lots of local talent…for a couple reasons: it makes the event truly local keeping in the community spirit and the more terrific local acts we include means more people will likely be in attendance, making it a win-win situation. We get to spread awareness, and they get to promote themselves. We have a large variety of musicians willing to help with the issue, hence the 3-midnight,” said Smith.

The idea for using music and art to raise awareness for human trafficking came from the fact that music and art are extremely powerful.

“Music and art are extremely powerful tools which have the capability to reach many people and affect them deeply,” said Smith.  “The songs and artwork don’t necessarily have to be geared to slavery and human trafficking.  We let the power of community and emotional art do the work and some of the talking.”

Smith also said that soul and the ability to deeply touch their audiences is the binding characteristic of all the musicians.

Smith got involved with Jam for Justice in 2004 after her mother started an event at Washburn University with the aid of the Sociology/Anthropology Club and the Social Justice League to raise awareness of human trafficking and modern slavery.

“She often included art and music during these events.  Being a musician, it was natural for me to be a part of the process,” said Smith.

Jam for Justice is put on in conjunction with Stop Trafficking and Reject Slavery, a local organization that is dedicated to providing information and raising awareness in the Topeka and Shawnee County area.  More information about human trafficking can be found at starstopeka.org.

While education is one component of change, Smith also said that correctly identifying who is the criminal and who is not will lead to change.

“In order for change to happen, we need to understand that a prostituted woman, man, or child is not a criminal, but a victim,” said Smith.  “There are an estimated 27 million slaves in the world today. Runaway and homeless youth are particularly vulnerable and targeted by human traffickers and pimps. Thirteen years old is the average age of a victim of commercial sexual exploitation, and 50 percent of all victims are children, often younger than thirteen.”

More information about Jam for Justice can be found on their Facebook page, www.facebook.com/jamforjusticetopeka.