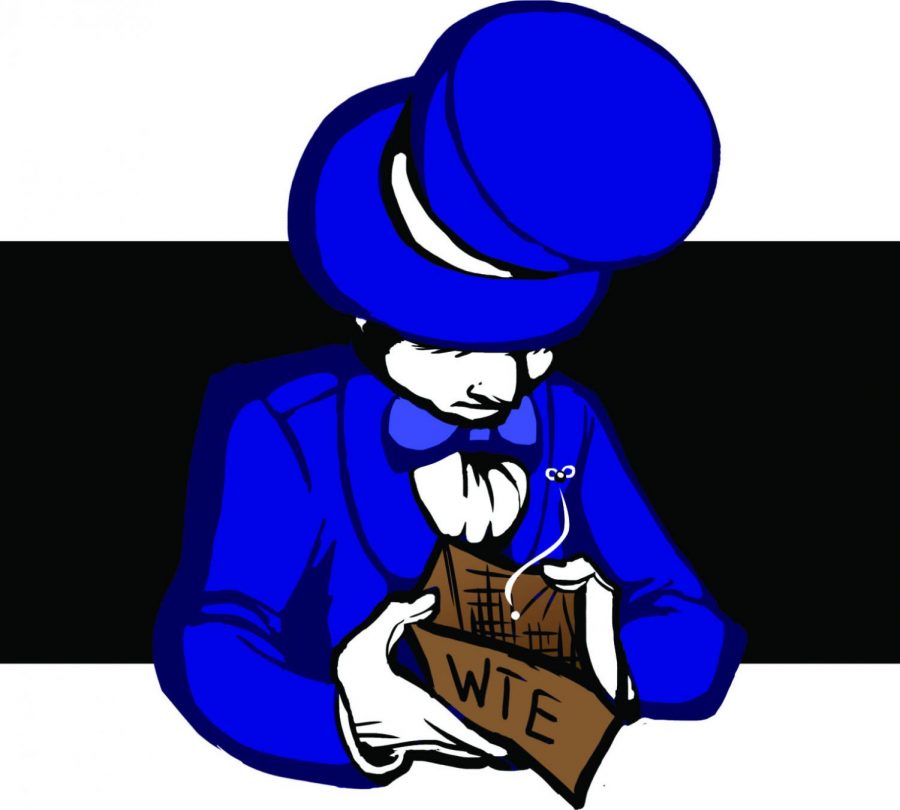 “Last year and this year when I sent out the email, I just braced myself for faculty yelling at me, but all I ever get are compliments: ‘Good for you!’ ‘I’m happy.’ ‘Says what a great thing this program is’,” said Russell, “I regret not having any money, but the faculty just love that students are taking advantage of it.”

120 students have been awarded funds for the Scholarly or Creative WTE this year. Students were awarded money to complete projects that ranged from presenting a video game design to top game designers, presenting research about interprofessional learning in the medical field at an international conference, to conducting groundbreaking research.

“That’s the general great nature about the WTE, that the student can explore anything they’re interested in,” said Russell.  “There are really interesting things. They just cover everything.”

One of the projects that was awarded money this year was a project done by Jordan Huzarevich who studied the link between caffeine and non-clinical hallucinations, such as hearing things that aren’t really there.

“He was able to apply for funds to get the headphones, get the caffeine tabs, get the sugar pills, to have those parts paid for for his study,” said Julie Boydston, a licensed psychologist and lecturer in the Psychology Department and advisor to Huzarevich. She went on to add that the money awarded to Huzarevich covered most of his materials, even down to the water for the clients to take when taking the pills.

A group of nursing, kinesiology, physical therapy, and psychology majors were awarded funds that included their travel to Chicago to present their research on inter-professional learning in the realm of academia. This project builds on another conducted by a separate group of students the prior year.

The students, all members of the Student Inter-Professional Education Counsel, will travel to Chicago in March and present their research.  The money they received from the Scholarly or Creative WTE will cover most traveling expenses, but one of the members of that team did not receive funds.

“The rest of the team is actually trying to help do some fundraising to help support her financially so she can go,” said Kathy Ure, C.O.A.C.H. Director and lecturer in the School of Nursing, “I wish she could have gotten it, but at the same time, I’m seeing that this team is going to try to help her get there.”

While opportunities like Huzarevich’s and the group from SIPEC are wonderful, funding cannot be given to every student who applies. This is the second year that the Scholarly or Creative WTE has run out of funds.

“The money has been disappearing very, very quickly,” said Russell, explaining how his budget was gone within four months this year. He hopes the increased interest will lead to increased funds.

“I would love it if my budget was double then I could imagine that it could go all the way through the fall and spring semester,” said Russell.

“We just have more students who are interested and doing it and it would be nice if the funds grew with that [otherwise that] means that there’s going to be more students who aren’t getting funds and they probably won’t be thinking of more creative projects to do,” said Boydston pointing out that having those resources were very helpful in allowing Huzarevich to be creative in his research.

In the case of the student from SIPEC who didn’t receive funds, she has her team members to help her.  Other ways students can try to get funds are through their department, other on or off campus places and doing fundraisers.

Students who need money for posters to present at Day of Transformation or Apeiron in order to complete their WTE need not worry.

“There will always be money for posters, no matter what,” Russell said explaining how he sets aside money every year that students can use to print posters to present their work.”

Russell also added that any money that the students and faculty do not use from their awards will be put right back into the program.  It is his hope that those extra funds become available to be able to award more students.  Students can complete a WTE at any time, but if they would like to request funding, they should wait until July 1, which is the beginning of the new fiscal year.

“Someday, when funding from the state gets better, I like to think our budget will increase,” said Russell. “My goal, my vision, my hope is that it will increase so much that every single student will do it.”

The WTE program was put into place in the spring of 2006 to allow students to ‘turn dreams into reality.’

“That’s why we called it out signature program,” said Russell, “No other institution has anything that resembles the WTE.”