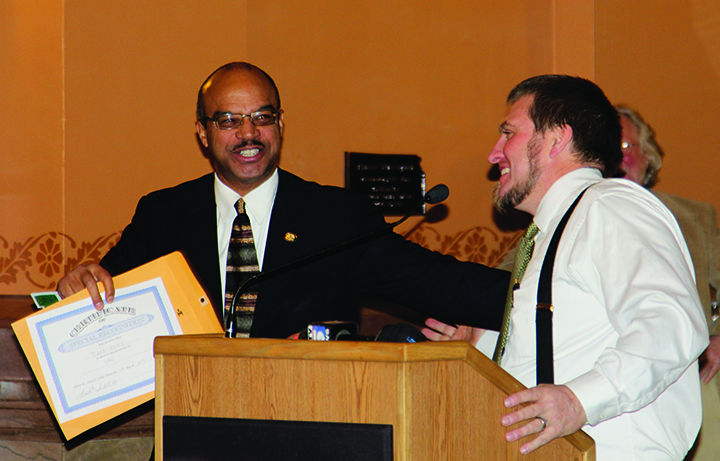 Kansas lawmakers are now reconsidering a bill introduced with the goal of legalizing medicinal marijuana. This bill, SB 9, which is also known as the cannabis compassion and care act, and its house-based twin, died in committee last May, but Sen. David Haley, D-Kansas City, and Rep. Gail Finney, D-Wichita, are not going to give up the fight.

Esau Freeman, a resident of Wichita and president of Kansas for Change, Inc., has worked toward legislation with these members of the Kansas congress and he gave insight into the background behind the push for marijuana legislation.

“We’re not asking doctors to define this as a medicine, we’re not asking for the FDA to do it either,” said Freeman. “What we are asking is for doctors and patients to be able to make a decision and for doctors to be able to prescribe to patients. We also need permission for caregivers to grow, in a not for profit organization, with police supervision, and to distribute the cannabis to patients that need it based upon that doctor’s recommendation.”

Freeman went on to address a concern that those who do no want marijuana legalized, the effect it may have on impressionable youth.

“Quite honestly, we already have laws to protect the youth in Kansas,” said Freeman.

The bill would address other issues that lawmakers in particular have pointed out during their discussions with Kansas for Change, including not allowing there to be ‘pot doctors’, or those who just give out a prescription for cannabis that would allow the patient to gain access to marijuana hours later. This bill would require a patient to see the same doctor three times in less than a 90 day period before he could gain his medical card. These compassion centers would also not draw attention to themselves with large advertising or flashy signs, they would instead be discreet, placed well away from schools and access will be highly restricted.

“We want to do the same thing that some of the other states have done and not allow outdoor advertising,” said David Mulford, treasurer of Kansas for Change. “You won’t see big pot leaves. We’ve listened to what the people told us for the last three years. ”

Another aspect of this legislation addresses how marijuana legislation would affect the local farmer.

“As for medical marijuana being grown in the state, if a farmer wants to have an indoor facility to grow then they would be allowed to do it. We’re not talking about growing outside in a field. Specifically, all these facilities would be locked,” Freeman assured. “People would not be able to know that they were there.”

In addition to being able to grow legal marijuana, hemp production would also be legalized, allowing for another crop that Kansas farmers could choose to grow.

For more information on Kansas for Change visit:  http://www.kansasforchange.com.