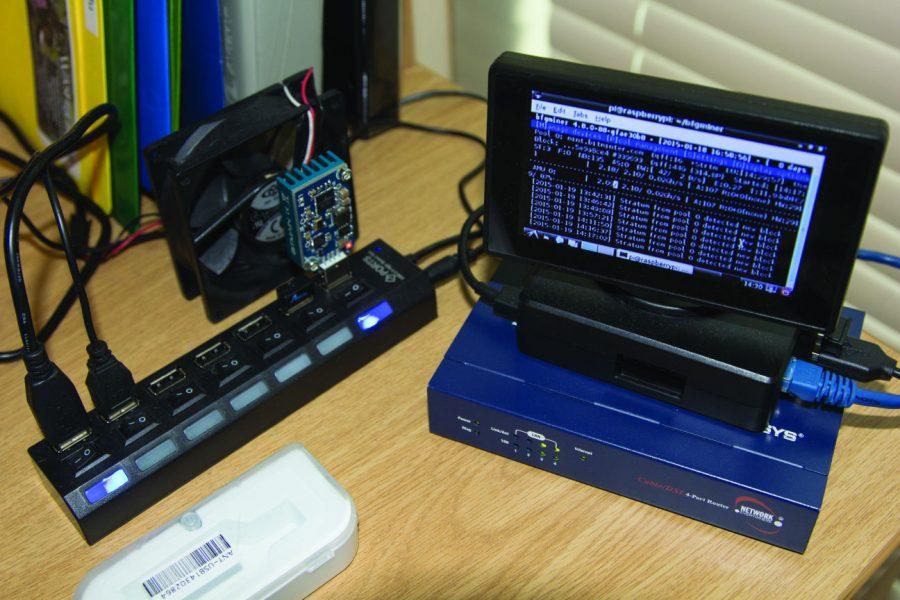 Mine-craft: A USB Bitcoin Miner utilizes special software to generate bitcoins. Miners like these are considered small-scale by today’s standards.

Bitcoin, a digital currency created in 2009, is slowly, but steadily changing the way consumers can pay for goods and services.

Entrepreneurs Grant Brown and Mark Vick, both Bitcoin “miners”, have set up Bitcoin vending machines, similar to ATMs, which will turn cash into Bitcoins. Despite a growth in popularity, the cryptocurrency, as it is dubbed, is also seeing hard times as the value of Bitcoin is steadily falling.

Bitcoin is differentiated from standard currency in two ways, those being that it is an electronic money source with no physical backing and that it is not controlled by any central authority, such as a government or bank. This difference also makes the cryptocurrency’s value slightly unstable. At its peak, one Bitcoin had a value of almost $1,120. It is now worth around $210.

Vending machines are set up in an area in hopes that local residents will invest in the cryptocurrency. While digital currency is free from government or bank regulation, it is only worth as much as people invest in it. Currently, the market cap, or total amount of money invested in Bitcoin is just under $3 billion.

Like any currency, the value of Bitcoin is dependent on the amount in existence in relation to the amount of money invested in the digital currency. More than 13 million bitcoins are now in circulation, which means eco- nomic trends like inlation are still possible.

The process known as Bitcoin mining is what adds new bitcoins to the supply. In Bitcoin mining, miners use computers and special software to solve math problems and are issued new bitcoins in exchange. The process takes time, as a day of mining only yields fraction of bitcoins, and the process gets longer and harder over time, due to so many bitcoins being in existence that the computers holding them take longer to process the calculations involved.

“If Bitcoins are being produced at a rate faster than the rate at which the goods and services it can buy are being produced, it will also lose its value. On the other hand, if traders decide that it will gain value, it probably will,” said Jennifer Ball, Associate Professor of Economics.

However, Bitcoin is also facing a record fall in value. Analysis by Forbes suggests that the mass liquidation of bitcoins by Chinese investors due to a government ban on real-world use is contributing heavily to the drop in value. The Mt. Gox Bitcoin exchange, a website where people buy and sell bitcoins, is also contributing heavily to the falling price due to its declaring bankruptcy from hackers stealing $460 million worth of bitcoins held by the exchange site.

“If I held a large cache of bitcoins I would be more concerned that people would suddenly no longer accept bitcoins for the things I wished to purchase,” said Paul Byrne, Associate Professor of Economics. “They seem to me to be more like Beanie Babies than a legitimate alternative currency.”

Aside from the massive losses due to hacks and liquidation, Bitcoin is also losing value because other cryptocurrencies are emerging that are catching the eyes of investors. Darkcoin, a digital currency that catches interest with its promise of completely anonymous transactions by combining multiple transactions into one event, is a noteworthy competitor.

These competing cryptocurrencies are gaining value, but still do not hold near as much value as bitcoin. Ripple is currently the second highest ranking digital currency, with a market cap of almost $500 million. Litecoin is third, with a market cap of $47.4 million. The value of a single Ripple is still worth only a fraction of a cent because over 30 billion exist. One Litecoin is currently only worth $1.33.