Washburn law students take on the competition at the regional level 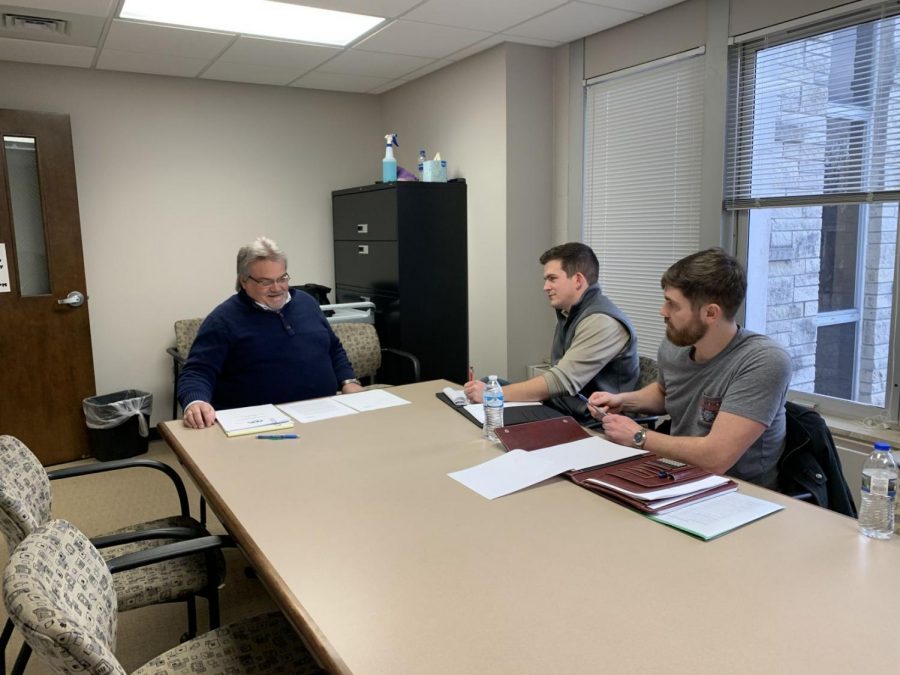 In the zone: Law students David Braun and Nick French practice their client cooperation skills with their coach Dean Shawn Leisinger. This will be the first competition for Braun and the second for French.

The Washburn University School of Law will be hosting the American Bar Association 2020 Regional Client Counseling Competition Saturday, Feb. 8. During the event, teams of two will take part in a hypothetical interview with a client. The objective is helping law students learn practical skills that they will use when they first interact with a client.

French explained that this competition provides students with a real life situation to help them figure out how to get as much information as possible.

The judging is based on teamwork: building a rapport with the client. The information received from the client is one factor, but the judges will also be looking for how comfortable competitors make the client feel.

“The other team will have the same question and the same fact pattern from the client, and they will do their own session,” said Braun.

This will be the first time Braun competes, but French has an advantage with this being his second year of competition.

“The expectations are going to be pretty similar as far as we know because of the basic interview process,” said French.

The only thing the teams get going into the competition will be a small sentence serving as the prompt.

“You don’t really know what is going to happen until you walk out of the room after you’ve already finished the competition,” said French.

If all goes as well as they hope, the team will win at the regional level, move on to the national level, and finally compete at the international level — the big dream. The skills that the competitors learn at this event will aid them in real world situations.

“This helped me out quite a bit last summer when I had an internship in Wichita,” said French.

Associate Dean Shawn Leisinger, who is also Braun and French’s coach, said that this type of event helps develop skills before they enter the workforce.

“A lot of our former students are now prosecutors and county attorneys,” said Leisinger. “A lot of them will comment back to me that it was invaluable for them to learn how to interview a witness.”

In the world of tech, it is harder for people to have face to face interactions; gaining these skills early on will help them be one step ahead.

“The reality is, as generations have come and gone, they have less natural ability and inclination,” said Leisinger. “To actually interview and interface. It is almost more important for law students now to learn it.”

Leisinger understands this competition better than most since he took part in this event when he attended Washburn University in 1997. Now, he has been the coach of the client counselor competition team for 20 years.

Teams from North Dakota, South Dakota, Minnesota, Iowa, Nebraska and Kansas will attend and be judged by local attorneys as well as many professionals from around Topeka.