Reader’s Theater thrives in Washburn’s ‘The Other Place’ 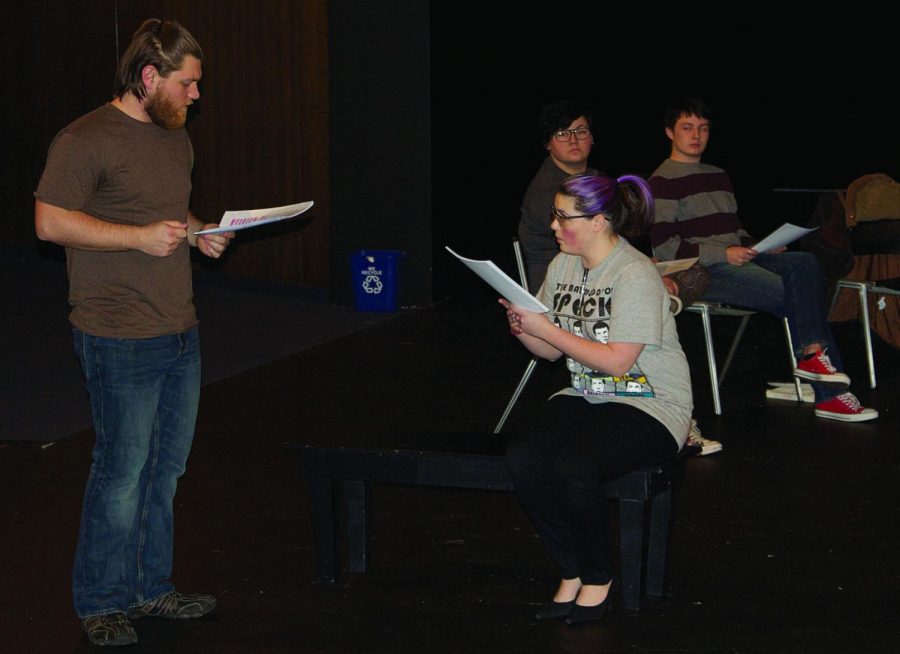 The Others: [Foreground, left-right] Austin Swisher and Abbey Geiss run through their lines during a dress rehearsal for "The Other Place." Grace Foiles and Michael Anschutz await their cues in the background. "The Other Place" opens on Friday, Feb. 13 at the Andrew J. and Georgia Neese Theatre.

For Juliana Smithton, life is complete chaos. Although she’s successful in her field of work, neurology, her home life and her health take a deep turn for the worse.

Washburn’s theater department is performing Sharr White’s “The Other Place” in the Andrew J. Garvey and Georgia Neese Gray Theater on February 13 and 14 at 7:30 p.m. and February 15 at 2:00 p.m.

The play will be performed in the Reader’s Theater style, with students reading directly from scripts.

“I really like [this play] because it’s different,” said Amy Reinhardt, junior, mass media major, who plays Smithton’s daughter, Laurel. “We don’t have costumes and a set so [the audience] can focus on the words and language. The more I think about [the play]; I realize that it’s sad. It pulls on your heart strings.”

Juliana Smithton, played by Abbey Geiss, senior, theater major, is plagued by the recent tragic events in her life. Her husband is filing for divorce and her daughter has run away with a much older man. However, Smithton has more to worry about when her health begins to fade and her thoughts become confused. Although Smithton says her poor health is due to brain cancer, her actions and the doctors may say otherwise.

Michael Anschutz, freshman, English education major, who plays Richard Sillner, says that this play is interesting because with modern technology, there may be a cure for what Smithton is really dealing with.

This play continuously keeps the audience guessing about Smithton’s real health issues and mental state. However, Smithton’s decline is severely noticed after she mistakes a random young woman as her own daughter.

In April, the Washburn Theater will run their production of Tennessee Williams’ “The Glass Menagerie.”

For more information on the Washburn Theater Department, visit www.washburn.edu/cas/theater.